Home Uncategorized At virus-hit village in UP: ‘After untimely rain, curfew…now in God’s hands’
Uncategorized

At virus-hit village in UP: ‘After untimely rain, curfew…now in God’s hands’ 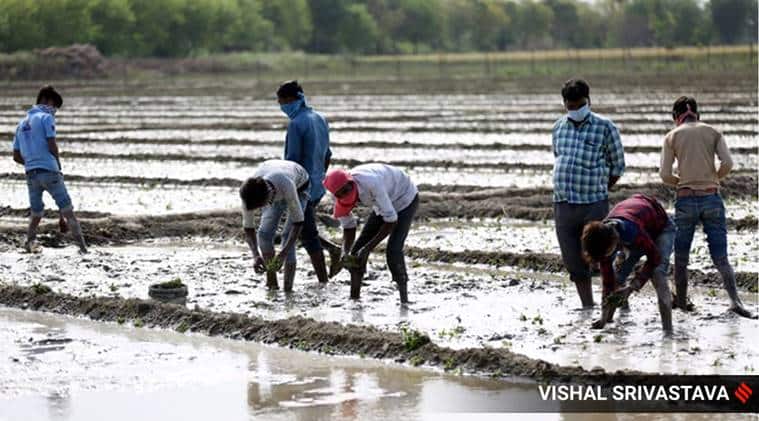 Although farmers concede that the restrictions are for their welfare, they are staring at an uncertain future, and possible losses, during crucial harvest season due to shortage of labourers, diesel and fertilisers. (Representational Image)

Mailaraiganj village in Barabanki district is eerily quiet with people peeping through their windows — emblematic of the nationwide lockdown.

The curbs were further tightened after a man tested positive for coronavirus on April 4. At the entrance of the village sit two police officers with a brown rope tied to bamboo sticks to check the entry of outsiders. Six such check points have been set-up in the village of 5,000-odd people.

Although farmers concede that the restrictions are for their welfare, they are staring at an uncertain future, and possible losses, during crucial harvest season due to shortage of labourers, diesel and fertilisers.

Sitting in his courtyard with some other men in chairs, spaced at considerable distance, is village head representative Shibli Mian (38), whose aunt Ramzana Khatoon is the village head. “Every farmer in the village will face losses. First, it was untimely rain that gave a blow to the farmer. Now, it is the lockdown and curfew. But what can anyone do about it? It is all in God’s hands,” Mian declares resignedly.

Acknowledging the work done by the local administration, he says that the curfew is a must for the village. “The village has been under complete curfew since April 2. We have all the help from the administration, but the village population is suffering financial losses due to the curfew. Initially, the curfew was for three-four days, but it has been extended more than once,” says

Mian who is getting calls from people for essentials such as groceries, milk, medicines, etc. Next to Mian’s house, Santosh Kumar (35) is standing in his courtyard with a buffalo. He owns a 20-bigha land. “I had planted pepper mint on 12 bighas, wheat on the rest. Pepper mint requires water every 7-8 days. The crop may be damaged because of the shortage of diesel for the irrigation pump. The wheat crop may also face the same fate as there is an acute shortage of farm labourers. Now, what can we do? We are following orders from the officials,” says Santosh, who lives with his brothers, parents, wife and three children.

Among the distressed farmers is also Raj Kishore Maurya (30), who has 2.5 bigahs of land. He has been unable to visit the market to buy fertilisers. “I have not been able to remove the weeds from the pepper mint crop and that is a major concern for me. We have not been able to get fertiliser from the district headquarters. I have heard even the shops are shut. But these issues make me feel this will be a bad year for farming, the only source of my income,” says Maurya, who lives in a semi pucca house with his wife and two children.

In addition, farmers fear that the village may be stigmatised as the sole coronavirus case of the district has been reported from here. This may discourage labourers from working in the filed even after curbs are lifted.

Another farmer, Mohammad Zubair (38), shares this worry. “Everyone knows there is fear of this disease among common people, and just because the labourers are poor doesn’t mean they want to risk their life for money. This time, farm labourers who usually come from neighbouring villages will not come, I feel and it will be hard for us to harvest the crop without them,” says Zubair, who has a family of eight. It is not only farmers who are in a bind.

Mohammad Irfan (34), who owns a grocery store on the periphery of the village, says his shop has remained closed this month. “After the lockdown was announced, I have not been able to go my shop. And now, with the curfew, I don’t think there is a chance of me reopening the shop any time soon. I am suffering losses, but everyone is helpless due to the disease,” says Irfan, who lives in a joint family with 13 members, including his two children.

“We are doing everything to ensure essential supplies reach the village. We have a designated truck which is delivering milk to the village daily. We have also allowed vegetable carts to cater to the village,” Chauhan tells The Indian Express, adding that the administration will follow the state government’s order on relaxation in curfew.