Home Uncategorized Biden is now the presumptive Democratic nominee. Here’s how he stacks up...
Uncategorized

Biden is now the presumptive Democratic nominee. Here’s how he stacks up against Trump in the polls.

Joe Biden, now the presumptive Democratic presidential nominee, has told voters throughout the primary that he is the candidate who can defeat President Donald Trump in the fall — and recent polls suggest he could be right.

Biden has led Trump in every national poll taken in the past month and a half. But his advantage in these polls varies — and has rarely been decisive. A Quinnipiac University poll taken from March 3 to 8 (before the severity of the coronavirus pandemic was widely acknowledged) saw the former vice president with an 11 percentage point lead on Trump (with a 2.8 percentage point margin of error), for instance, but an Economist/YouGov poll taken April 5-7 gives Biden a 6 percentage-point lead (with a 3.1-point margin of error).

Now, with Sen. Bernie Sanders exiting the Democratic primary, it is instructive to look at averages in order to get a sense of how Biden stacks up against Trump in general. A RealClearPolitics average shows Biden ahead of Trump — with a 6.1 percentage-point lead. 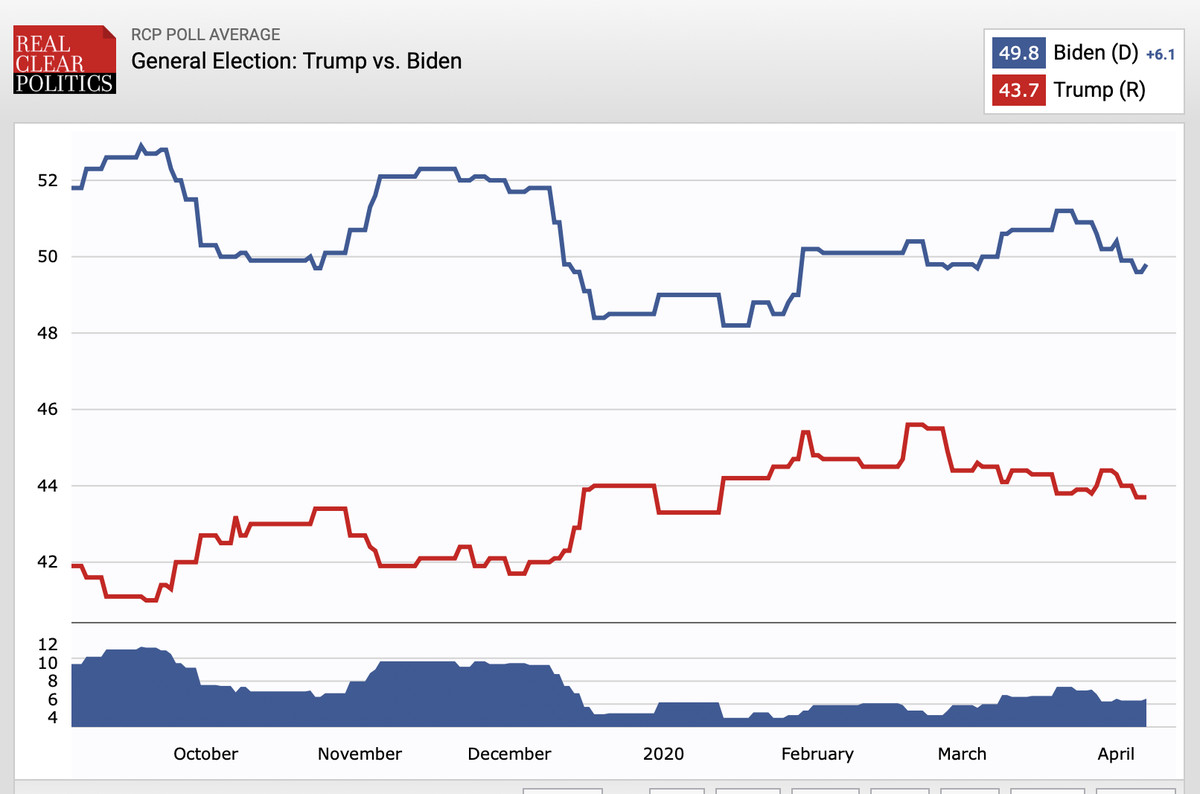 Overall, then, Biden is in good shape. However, US presidential elections require candidates to win at the state level, not just nationally, to win the White House — as former Secretary of State Hillary Clinton has noted, she won the popular vote in 2016 but did not become president.

The race in states that could tilt the Electoral College count in Biden’s favor is far closer than the national numbers would suggest.

As usual, the race in November is going to come down to a handful of states. Recent polls do not exist for all the battleground states, but in the polls we do have, it is evident that Biden — at the moment, at least — faces a tough road to the White House.

Biden delivered a dominant performance over Sanders in Florida, winning that state’s primary by nearly 40 percentage points. But polling doesn’t show a similar advantage over Trump that would allow an easy win of the state’s 29 Electoral College votes. In fact, in most recent polling, the president and former vice president were essentially tied, with one or the other having a 1 percentage point lead, a result well within the margin of error.

There is one standout: The most recent Florida poll, taken March 31-April 4, of 3,244 registered voters by pollsters at the University of North Florida puts Biden ahead by 6 percentage points — a lead not erased when one considers the survey’s 1.7 percentage point margin of error. Only 8 percent of voters said they were undecided which of the two men they would vote for.

In a press release sent out with the poll’s results, however, Dr. Michael Binder — director of the university’s Public Opinion Research Lab — cautioned observers to take the results with a grain of salt.

“I would exercise caution when looking at these numbers. First, these are registered voters — not likely voters; second, the campaign season has screeched to a grinding halt and people are rightly less focused on politics,” Binder said. “Although this same sample of voters, when asked who they voted for in 2016, indicated a very slight advantage for Trump, suggesting that something may be changing in Florida ahead of the election.”

Essentially, as pundits said of the Democratic primary this time last year: It’s early. A lot could change in Florida between now and November, particularly given uncertainty around how the coronavirus pandemic will affect Trump’s standing in the eyes of the public, and how it could affect both campaigning and voting.

Results were similar in Michigan, where a Public Policy Polling (PPP) survey of 1,019 registered voters taken March 31 to April 1 found Biden to have a 3 percentage point lead on Trump — albeit with a 3.1 percentage point margin of error. That margin of error suggests the race is more or less tied in the state, with only a few (7 percent) registered voters undecided.

Given this gridlock — as is the case with Florida — newly registered voters could have an outsize impact on the race, as could Covid-19.

Michigan’s Gov. Gretchen Whitmer has emerged as a leading national voice in the coronavirus response, and has been both critical of Trump’s response and a target of the president’s derision. She, however, is popular in the state according to PPP’s polling, receiving a 54 percent approval rating, with 62 percent saying she’s doing a good job handling the coronavirus crisis (as of April 8, nearly 19,000 people have tested positive for Covid-19 in the state).

Trump, meanwhile, received mixed reviews, with 45 percent saying they approve of his job performance and 46 percent saying he’s doing a good job handling the virus. Such numbers suggest Whitmer’s backing — which Biden received in March — could be a boon for the former vice president. Biden has said the governor is on his shortlist of potential running mates, and should he chose her, she’d perhaps be able to do even more to help his chances in the state. While the effect running mates have on a candidates’ chances in their home state has been disputed, some research shows they provide an advantage. And — again, at least right now — polling suggests Biden needs every advantage he can get to help win Michigan’s 16 electoral votes.

In Wisconsin — which has 10 Electoral College votes, and which Clinton lost by 0.7 percentage points in 2016 — the advantage has also been moving between Biden and Trump. The most recent poll, taken by Marquette Law School of 813 registered voters from March 24 to 29, saw Biden with a 3 percentage point lead — with a 4.2 percentage point margin of error.

As with Michigan, Wisconsin has a Democratic governor, Tony Evers, who has received high marks for his coronavirus response; even Republicans approve of it, with 63 percent saying he’s done well handling the crisis. Approval of Trump is split in the state, with 48 percent approving of him and 49 percent disapproving.

All this would make it appear that Biden has a decent chance in Wisconsin — but as an election in the state Tuesday showed, it is not clear the general election will be one in which every resident is enfranchised, particularly if Covid-19 concerns continue at their current level of seriousness into the fall.

One other state that was incredibly close in 2016 — Pennsylvania, where Clinton also lost by 0.7 percent of the vote — seems set for a similar outcome in 2020. The most recent poll there was of 973 registered voters conducted by Baldwin Wallace University, Oakland University, and Ohio Northern University from March 17 to 25. The universities’ pollsters found Trump to have a 2 percentage point lead, with a 3.9 percent margin of error, and with 9 percent of respondents saying they’ve yet to make up their minds.

Biden should have a home-state advantage in Pennsylvania — “We call him the ‘scrappy kid from Scranton,’” Christopher Patrick, Lackawanna County’s Democratic Party chair told the Associated Press. “He’s our guy.”

Still, Biden’s wins in other states had Pennsylvania Democrats feeling good about his chances, even before Sanders suspended his campaign. Following big Biden wins in February, John Cordisco, Bucks County’s Democratic Party chair told the Associated Press, “You can feel that sense of, ‘It’s okay now.’”

Whether it will actually be okay for Democrats in Pennsylvania remains to be seen — but the state is important for Biden’s hopes of winning the White House: Besides Florida, Pennsylvania has the most Electoral College votes of any of these four states, with 20.

All this means that it’s hard to say whether Biden can actually beat Trump. Right now the polls suggest he has about a 50-50 chance. But as the Democratic primary has reminded us, things can change fast — two months ago, Sanders led the primary field, Biden and former New York City Mayor Mike Bloomberg were tied for second, Trump had just been acquitted following his impeachment, and Covid-19 had just been given a name.