As Canada’s aviation and tourism sectors face a decline of epic proportions because of the COVID-19 pandemic, the federal government is preparing an aid package to save an industry that employs well over 2 million Canadians.

The lobby group that represents dozens of air carriers in this country is warning that, without immediate support from Ottawa, airlines will fold, thousands more will be out of work and the travel landscape in this country will be crippled for the foreseeable future.

Prime Minister Justin Trudeau has said help is on the way — but it can’t come soon enough for an industry bleeding cash.

“We recognize there are certain industries that have been extremely hard hit by both the drop in oil prices and the COVID-19 challenge, whether it’s airlines or oil and gas or tourism,” Trudeau told reporters Tuesday when asked about the prospect of support.

“There are significant areas where we’re going to have to do more. And as I’ve said from the very beginning, we will be doing more.”

Airports across the country are virtually empty as travellers heed the warnings of public health officials to stay home and avoid all non-essential international and domestic travel to stop the spread of the deadly virus.

“The impact of all this is just devastating. People aren’t flying at all or capacity is at 10, 15 per cent. Nobody can sustain that for very much longer, that’s for sure,” John McKenna, president of the Air Transport Association of Canada, told CBC News.

“We’re eagerly awaiting an aviation-specific plan but we haven’t heard anything. We have no idea what’s coming.” 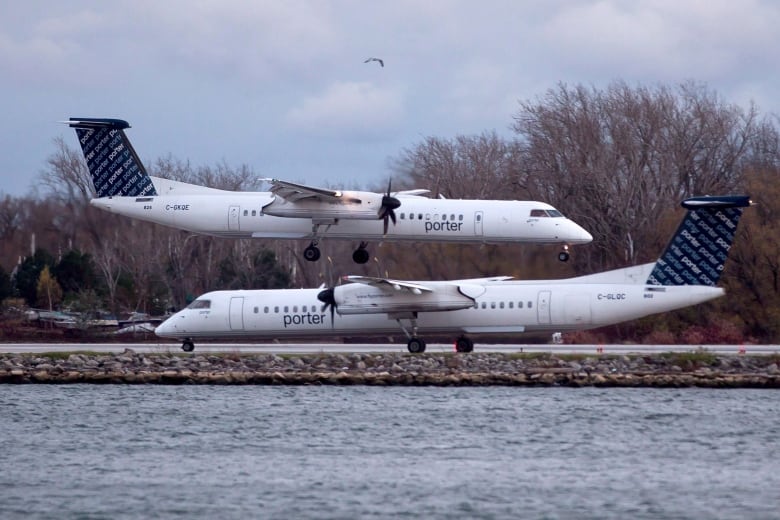 A Porter Airlines plane lands next to a taxiing aircraft at Toronto’s Island Airport. Porter Airlines says it is temporarily suspending all flights as part of the public health effort to contain COVID-19. (Chris Young/Canadian Press)

His organization represents both large and small airlines, including Porter — which has grounded its entire operation— leisure carrier Sunwing and more than a dozen regional operators that serve rural and remote communities.

McKenna said that some carriers won’t make it through this crisis. He warned that the damage to the industry will only increase while it waits for the federal government to act.

‘Help us out here’

He said the promised wage subsidies for all businesses will help but his organization is also looking for interest-free loans to provide carriers with some much-needed capital.

He’s also asking that certain government fees and surcharges be waived so the companies can stay afloat. He asked that planned changes to the Canada Labour Code — including new rules for rest periods — be deferred to lessen the regulatory burden.

“Give us a break on everything else while we concentrate on surviving. Help us out here,” McKenna said.

He said some airlines were already in “dire straits” before COVID-19 hit, as carriers had to park their Boeing 737 MAX jets while still paying purchase agreement loans. The 737 Max was grounded worldwide a year ago after an Ethiopian Airlines flight crashed outside of the capital Addis Ababa, killing all 157 people onboard.

“You’re telling people not to fly. You can’t just leave us hanging like that,” McKenna said.

Finance Minister Bill Morneau announced Tuesday that Ottawa would be waiving rent payments for 21 of the country’s airports between March and December 2020.

In Canada, most major airports are operated by independent, non-profit authorities, but the land on which these airports sit is still owned by the federal government. With fewer people flying and paying fees, making the rent is a challenge.

That measure will save airport authorities about $331 million a year in rent payments. But that does little for the national and regional air carriers that fly through them.

“I’d be surprised if we saw any of that,” McKenna said. 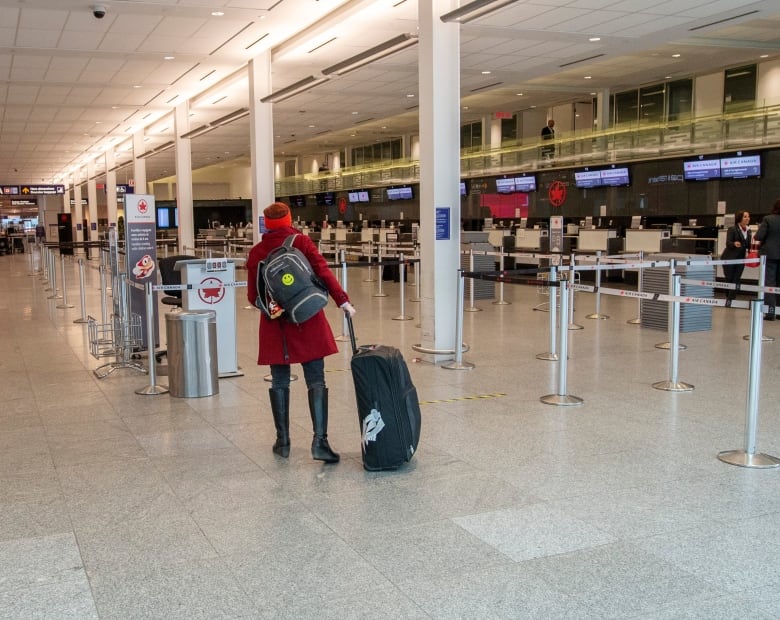 A passenger makes her way to the check-in at Trudeau International Airport Monday, March 30, 2020 in Montreal. The federal government is waiving the monthly rent paid by airport authorities to Ottawa for the rest of the year as revenues plummet due to the COVID-19 pandemic. (Ryan Remiorz/Canadian Press)

Larger air carriers like Air Canada and Air Transat have been pressed into service to rescue Canadians stranded abroad by travel restrictions driven by the pandemic’s spread, but revenue from other operations has all but evaporated.

Air Canada, one of the world’s largest airlines, is in the midst of a system-wide shutdown that will result in a stunning 85 to 90 per cent reduction in capacity compared to the same period last year. Starting today, dozens of flights to the U.S. or international destinations will be grounded.

Nearly 17,000 of its employees have been temporarily laid off as the airline tries to protect its balance sheet and avoid bankruptcy. Beyond a few “air bridges” to locations overseas, Air Canada is a fraction of the size it was only a month ago. The company’s share price has declined by some 70 per cent from its high in January.

“To furlough such a large proportion of our employees is an extremely painful decision but one we are required to take given our dramatically smaller operations for the next while,” said Calin Rovinescu, president and CEO of Air Canada.

WestJet, the country’s second largest carrier, has also halted all international operations and is running some of its domestic flights with greatly reduced capacity at a time when demand has never been lower.

WestJet has laid off 7,000 employees and has cancelled virtually all planned capital investments for the year.

“This is devastating news for all WestJetters,” said Ed Sims, WestJet president and CEO, in a statement to reporters announcing the layoffs.

Major hotels, like Ottawa’s iconic Château Laurier, have temporarily closed while others are welcoming fewer than a dozen guests each night.

Tony Elenis, president of the Ontario Restaurant Hotel & Motel Association, said hotels are dealing with “a catastrophic” drop in business.

Some hotels have been asked by provincial health authorities to house some patients in the future as hospital capacity becomes increasingly limited, but the rates will be lower than what they could get from a regular traveller, Elenis said.

Regardless, it could be a much-needed source of revenue at a time when properties sit vacant, he said. 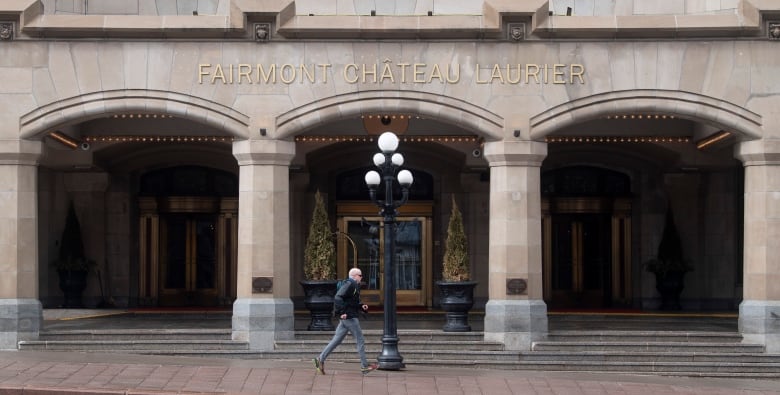 A man jogs past the Chateau Laurier hotel in Ottawa. The hotel announced it will temporarily suspend operations because of the COVID-19 pandemic. (Adrian Wyld/Canadian Press)

Dr. Theresa Tam, chief public health officer of Canada, said Tuesday that governments across the country are readying hotel rooms and other “alternative sites” to house non-COVID-19 patients or those with milder symptoms.

Quebec already has rented out a Quality Inn in Laval, Que. for this very purpose, with other sites expected to come online soon as the province grapples with the country’s largest caseload.

“We’re gearing up to accommodate patients. All of us should be working in any way we can to support those who are getting rid of this virus. A lot of hotel managers really want to support this,” Elenis said.

Tourism Minister Mélanie Joly did not respond to requests for comment.