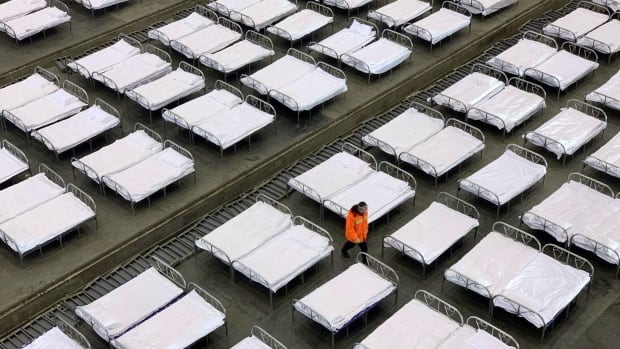 A small, specialized unit within the Canadian military’s intelligence branch began producing detailed warnings and analysis about the emergence of the deadly novel coronavirus in Wuhan, China in early January, CBC News has learned.

The medical intelligence (MEDINT) cell within Canadian Forces Intelligence Command is tucked away on the edges of the country’s security and defence establishment.

It has a mandate to track global health trends and contagion outbreaks to predict how they’ll affect military operations, but its assessments are heavily influenced by reports from the Five Eyes Intelligence partners, including the U.S. military’s National Center for Medical Intelligence (NCMI).

For at least one of the country’s leading intelligence experts, the fact that the unit was tracking the COVID-19 outbreak and reporting on it raises serious questions about information-sharing within the federal government — and its possible failure to heed early warning signs.

The MEDINT cell monitored the early progress of the outbreak in China and assessed how it could affect ongoing missions.

“We can confirm that CFINTCOM started to report on COVID-19 starting January 2020,” Lt. Hrayr Karageozia, a spokesperson for the military intelligence branch, said in an email.

The military unit, which is made up of specialists in public health, microbiology, biochemistry, emergency management and clinical medicine, uses open-source data — including World Health Organization statistics and analyses — along with classified intelligence from allies.

Its use of classified information could be significant in light of reports coming out of Washington this week that the U.S. military’s medical intelligence agency was following and reporting on the novel coronavirus as early as last November.

ABC News reported on Wednesday that detailed NCMI briefings, which raised the alarm about the COVID-19 outbreak, were circulated multiple times among decision-makers and policy experts in the Trump administration throughout December. They eventually ended up in President Donald Trump’s daily intelligence briefing package in early January.

Those assessments said the virus posed a serious threat to American forces in Asia and, significantly, claimed China’s leadership knew the outbreak was out of control and that crucial information was being withheld from foreign governments and public health agencies.

Karageozia said the MEDINT unit works “directly with its peer organizations,” but would not say whether those stark analyses made their way into the Canadian military’s medical intelligence brief.

‘How seriously was it taken?’

Wesley Wark, a University of Ottawa professor and one of the country’s top intelligence experts, said the Canadians may not have seen the full picture but would have seen some sort of overall information summary shared by the Americans.

“It would have been in the United States’ interest to share it with us and other allies so we could have a common front in what was to be a global pandemic,” said Wark.

The military medical intelligence unit’s role is “a very significant” factor in working out what the wider Canadian intelligence community may have known about the outbreak, he added.

“Here we have at least one part of the Canadian intelligence community that was doing early reporting. The question is, where did this reporting go? How seriously was it taken?”

The unit’s reports certainly made it to the desk of Chief of the Defence Staff Gen. Jonathan Vance, and likely were given to Defence Minister Harjit Sajjan as well.

Given that MEDINT is a small unit toiling deep within the confines of the military, Wark said he wonders whether it had the clout to be heard outside the bureaucratic confines of the Department of National Defence.

“How seriously was it regarded, both within DND and the wider security and intelligence community?” he asked. “Were its reports being properly circulated? Did it have the kind of respect within the community you need to have to get attention paid to intelligence reports?”

At one of the recent daily ministerial media conferences, Health Minister Patty Hajdu said her first major briefing on the pandemic occurred in early January.

It’s not clear whether any of those briefings were prepared using warnings from the military and allies, or if they were based strictly on data and assessments from the Public Health Agency of Canada (PHAC) — which is in charge of pandemic response in this country — and the World Health Organization.

It’s been reported that PHAC has its own small intelligence unit that has clearance to look at classified data, but Wark said he’s found little evidence of that unit in government documents, audits and briefings.

The country’s spy agency has no mandate to support PHAC’s data collection or efforts to track the impact of the pandemic, said John Townsend, a spokesperson for the Canadian Security Intelligence Service.

It has, however, offered the health agency “general advice” from its data science experts.

‘This is an intelligence failure’

Given the social and economic calamity that has been unleashed by the pandemic, Wark said, it’s alarming to see how “completely disassociated” PHAC is from the rest of the country’s security and intelligence community.

“This is an intelligence failure,” he said. “We didn’t have the early warning we needed and we didn’t have a system to deliver it.

“Intelligence likely came to us from our allies, especially the U.S., on what was unfolding in Wuhan and Hubei province, but whatever we saw from U.S. sources wasn’t enough to move our government to act sooner and more decisively.”

It wasn’t supposed to be this way, Wark said.

Following the SARS pandemic, Canadian officials were at the forefront of a number of domestic and international initiatives designed to provide early warning of pandemics.

The Liberal government of former prime minister Paul Martin embedded within its foreign policy statement a plan to beef up the Global Public Health Intelligence Network (GPHIN), a network of health professionals whose job — according to its website — is to “rapidly detect, identify, assess, prevent and mitigate threats to human health.”

It was supposed to operate in conjunction with the WHO and is headquartered in Ottawa.

Wark said that, despite the best intentions, the network is hobbled by other countries’ reluctance to share data and the accuracy of open-sourced media reports in a country where an outbreak occurs.

And a 2018 article, archived in the U.S. National Library of Medicine, reported that the GPHIN was in need of modernization and had turned to the National Research Council in Canada to “rejuvenate” its software, systems and tools.

“We put all our faith in a system of open reporting through the WHO. We should instead have applied the old adage — trust but verify.”