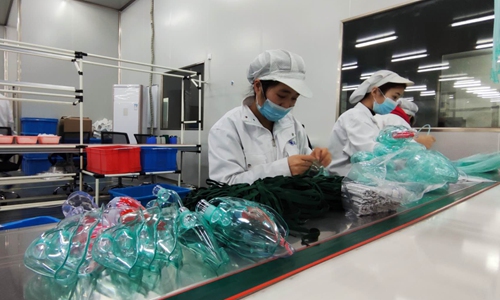 Even after the city lockdown was lifted, Liu Qi, a taxi driver in Wuhan, Central China’s Hubei Province, said he only had half the number of fares compared with before the coronavirus pandemic, as residents remain on high alert over its resurgence and are choosing to stay home. Ma Ming, manager of a local food market, said that 500 vendors haven’t earned a penny for the past two months, and are still anxiously awaiting a full resumption of business.

In the major manufacturing and export hub of Ningbo, East China’s Zhejiang Province, Chen Jie, deputy general manager of Ningbo Yikade Electrical Appliance Technology Co, said that production lines have been busy producing generators over the past month, but new export orders have been suspended due in part to port closures overseas, and workers could be furloughed if no new orders come in soon.

In the border city of Aksu in Northwest China’s Xinjiang Uygur Autonomous Region, the owner of a local garment factory said that the company was facing a “serious shortage of cash” to purchase essential materials to keep it running. Local farmers are counting on government support for securing everything from seeds to fertilizers to start the planting season.

These are vivid testaments to the depth and breadth of the far-reaching economic ramifications of the coronavirus pandemic, as well as the profound challenges the country faces in making up trillions of dollars lost over the past couple of months and lifting up the economy in the face of lurking uncertainties and risks going forward. They also provide a rare window for countries around the world that are still battling the virus to see what lies ahead in terms of economic recovery, even after they have successfully reined in the pandemic, and potentially draw lessons from how China tackles these challenges. A man works at a production line of the Swire Coca-Cola Beverages Hubei Limited in Wuhan, central China’s Hubei Province, March 24, 2020. Permitted by local authorities on March 15 to resume production, the beverage maker in Wuhan has restored the operation of some production lines since Monday. (Xinhua/Xiao Yijiu)

Many in China have billed the pandemic as a once-in-a-century event, that will reshape the global order and economy. However, with changes come pain. Beyond the devastating human costs, the pandemic has also left many in economic despair.

For taxi drivers in Wuhan, factory owners in Ningbo and farmers in Aksu, the virus first threatened their lives, and now it is threatening their livelihood. “I was also scared to death of going back to work, especially as my work requires constant contact with strangers… But if I stay home any longer, my family can’t afford food anymore,” Liu, the taxi driver, told the Global Times.

No sector has been spared by the outbreak, though some like the services industry and transportation have been hit harder than others. And no place – big or small, virus stricken or virus free, economic powerhouses in the East coast or less developed areas in the westernmost region – is immune to the fallout. Even as it has been squeezed out, the virus has left in its wake wounded consumer sentiment, broken supply chains and ultimately massive losses in gross economic output.

In Wuhan alone, the pandemic may have directly wiped more than 250 billion yuan ($35.5 billion) off the city’s GDP after a 76-day lockdown, local officials have estimated. That does not factor in the various indirect ways the outbreak has impacted the economy.

Under the worst case scenario, the coronavirus could have caused nationwide losses of up to 5 trillion yuan in economic output in the first quarter alone, as much of the economy was at a near standstill for nearly 50 days between late January and mid-March, according to Cao Heping, a professor of economics at Peking University in Beijing.

Cao’s calculation is based on the number of days the country was shut down and the Chinese economy’s average daily output of around 237 billion yuan, assuming only half of that output was intact during the period. Some overseas institutions have also predicted that the Chinese economy could shrink by 10 percent in the first quarter compared to a year ago, meaning total losses could come to around 2.13 trillion yuan.

“These are uncharted waters we are in. No one has faced anything like this before,” Cao told the Global Times. But he added that China can still make up the losses and more, if there isn’t a second wave of the epidemic and overseas risks are averted.

However, as the virus continues to spread abroad, uncertainties and risks abound. Apart from the risk of an influx of the virus, there are also risks for Chinese exports, which still account for over 30 percent of China’s total GDP, as foreign demand could be further dampened if major trading partners are unable to rein in the epidemic soon.

“It took China two months to control [the epidemic]… foreign countries can also control it, so overall we are optimistic but remain cautious,” Chen, the manager of Ningbo Yikade, told the Global Times, noting that his company generates about 80 percent of its annual sales revenue of 200 million yuan from exports.

While Chen remains optimistic, China’s top leadership are not taking any chances, calling for full-fledged efforts to restart the economy while continuing to put some anti-epidemic measures in place.

Warning of new difficulties and challenges for China’s economic and social development, President Xi Jinping on Wednesday urged “preparedness in mind and work” to cope with prolonged changes in the external environment, and efforts to minimize losses caused by the epidemic.

Xi made the remarks during a meeting of the Standing Committee of the Political Bureau of the Communist Party of China Central Committee, where the country’s top leadership discussed epidemic prevention and control and fully advancing work resumption, the Xinhua News Agency reported.

The meeting underscored the urgency felt by top leaders to reopen the economy despite the uncertainties and risks involved. It also provided a glimpse into how the country is planning to move forward on both fronts: normalizing anti-epidemic efforts, including strict quarantine and contact tracing, while stepping up efforts to lift the economy.

That also reflects the delicate balance China needs to strike between the speed of reopening the economy and intensity of measures to fend off lingering risks. Analysts are also torn over how fast China should speed up its recovery, with some like Cao calling for a faster pace and others urging a “cautious speed.” Some have also raised concerns over excess production if demand continues to sputter, but others point to the massive domestic market and unabated foreign demand for daily products in spite of the pandemic. However, they all agree that there is no precedent or standard for such an effort, but if robust measures are in place and consumers are reassured, speed and demand will pick up naturally over time.

“We cannot wait until the virus is completely eradicated to restart the economy, but at the same time, people won’t go out and spend money if they don’t feel safe,” Dong Dengxin, director of the Finance and Securities Institute at Wuhan University, told the Global Times, noting that domestic consumption remains the key to reviving the economy.

Domestic consumption contributes to more than 70 percent of GDP growth. With uncertainty continuing to loom over overseas markets, officials and businesses are also counting on the domestic market to make up some of the export shortfall to ease the pain. Chinese officials are also actively expanding export channels for domestic producers, including organizing large trade shows, increasing air and train cargo capacity and streamlining customs clearance procedures. In any event, Cao said that the domestic market is “big enough” and there is “plenty of time” left in the year to make up for the lost time and money, but just like during the epidemic, reviving the economy will also require a whole-of-society approach.

There is already a widespread social mobilization underway to save the economy, with the participation of governments at all levels, large state-owned and private corporations, and even ordinary citizens.

Just over the past few days, China said it would cut the amount of cash banks must hold as reserves in order to release about 400 billion yuan in liquidity to support small business and cut interest rates on excess reserves for financial institutions from 0.72 percent to 0.35 percent the first time since the global financial crisis in 2008. The country has also been relying heavily on fiscal policies to support the economy, including discount loans and major tax cuts for both businesses and consumers. This week, it also allocated 1.8 billion yuan to support low-income families.

Local governments across the country have also stepped up their own stimulus measures. Aksu, for example, has approved about 1.81 billion yuan in loans to small businesses. Many local governments have also issued coupons to residents to boost consumption. Hangzhou, in Zhejiang Province, has given away 220 million yuan in coupons that will help unleash 2.37 billion yuan in consumption. Many have expanded investment spending, including plans for new infrastructure such as 5G and big data worth at least 50 trillion yuan over the next few years.

More corporations have also joined in the fight over the past few days. On Tuesday, e-commerce giant Alibaba Group announced a plan to support small businesses with loans to as many as 10 million vendors and to help 1,000 factories reach online sales of over 100 million yuan within three years. Real estate developer Wanda Group is also giving away coupons worth 192 million yuan to consumers and has waived rents for some small businesses at its shopping malls.

It’s not just the government and corporations – internet celebrities and ordinary consumers are also doing their part by spending. For example, online sales sensation Li Jiaqi and television news anchor Zhu Guangquan have started to help push products from Hubei, and many are buying to support the local economy. After a promotion session on Monday night, the two reportedly helped sell 660,000 packets of noodles, rice wine and other local products.

“Just like the battle against the epidemic, the battle to save the economy also requires everyone to chip in. In that regard, China is better positioned than any other country,” Cao said, noting that “if everything goes smoothly,” GDP growth could still reach 5.6 percent for the whole year, an ideal target floated around by economists that could help the country meet long-held development goals, including doubling the 2010 GDP by 2020 and eradicating absolute poverty.