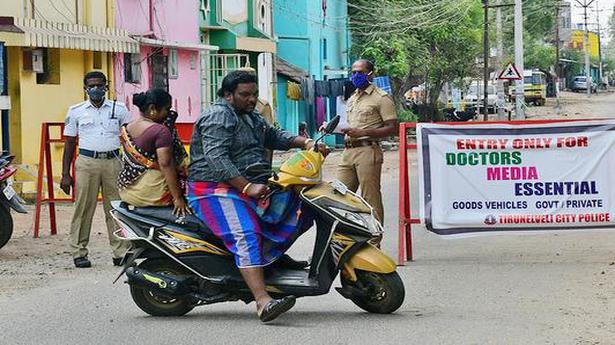 Has Tamil Nadu really got the lid on what it perceived as a big threat to its efforts to control the pandemic? With 1,103 people who attended the Tablighi Jamaat conference in Nizamuddin in Delhi, identified, health authorities do believe that the bulk of cases are under control.

The transformation from apprehension to confidence has been literally overnight. Until Monday, 515 people had been identified and the State government unsure of tracing every single person who attended the event in Delhi. In an initial batch, 16 out of 17 people whose swabs were picked up tested positive.

With this high rate of positivity conversion, it became imperative that every single person who attended the event be identified and tested. With the issue assuming alarming proportions and no viable route ahead, the State government decided to go in for a last resort measure — a suggestion that was apparently made by the Chief Minister — he said he would make an open appeal in the media, asking people who attended the event to come forward and declare themselves voluntarily. He went ahead with it.

In a couple of days, over 1,100 people had been identified. How did this happen? Health Secretary Beela Rajesh says it was simple: “They started calling us, they came on their own.” With the appeal from the Chief Minister, people started calling the helplines and the help lines started buzzing.

“They gave us details about themselves and also some gave us information about where we could find others who had travelled with them to Delhi.” By Tuesday, 515 people had been identified, and at 6 p.m. on Thursday, 1,103 people, across nearly 15 districts in the State, who had attended the conference had been identified, Dr. Rajesh adds.

With this, the Health Department believes it has caught the bulk of the group that went to Delhi. Work is on to test all of them and it will be completed in a day or so. The tail line and stragglers too will be identified in a day or two, Dr. Rajesh says.

Meanwhile, door-to-door surveillance is on in areas where these people lived, and containment strategies, cordoning off the area around the house, are ongoing.

Those who have stepped up, whether symptomatic or asymptomatic, have been sent to quarantine units in the government facilities, and all of them are tested. If they test positive, they will be sent on to the isolation unit in a hospital, and if they test negative, they will have to remain in hospital until the end of the quarantine period of 28 days, Dr. Rajesh explains.

When the contact tracing of family members and close friends and neighbours is complete, it is likely that within a week that the issue that threatened to overwhelm the State with a glut of unseen infections will be well within hand. With the government stating that the general community infection is at a mere 45 persons (out of 309 positive cases), the larger issue that one cannot see past is the contribution of the attendees. However, it seems as of now that the spectre of an explosion has materialised into a real form, and has been tackled, at least into quarantine.

Health authorities are well aware that while they might count this as an achievement, there is no room for complacence or fatigue here, and the vigil must go on, as long as COVID-19 remains a real threat in the country.