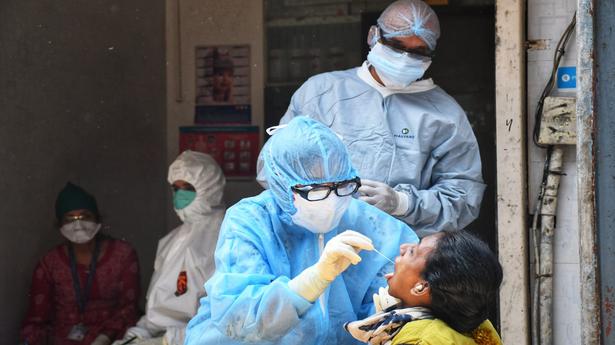 COVID-19 death toll in India exceeded 100 on Saturday, with the country reporting 104 deaths, including three in Tamil Nadu.

Over 3,500 confirmed cases have been reported across India, according to Health Ministry and State government data. As per Prime Minister Narendra Modi’s speech on April 3, the nation is poised to observe a lights-off event at 9 p.m. on Sunday ⁠— explained here is how that will affect our power system.

Across the world, more than 1.1 million people have been infected, the bulk of which is in Europe and China, which is the epicentre of the virus. Among India’s immediate neighbours, Pakistan has registered over 2,800 cases and 40 deaths.

The Hindu has brought out a multi-language e-book on essential COVID-19 information, in addition to covering the developments related to the coronavirus pandemic as it unfolded.

Here are answers from experts on your queries about the virus, a list of State Helpline numbers, a State-wise tracker for COVID-19 cases, deaths and testing, and a map of confirmed cases in India.

Here are the latest updates:

The number of positive Covid-19 cases in Andhra Pradesh crossed the 200-mark on Sunday, with the addition of 34 new cases overnight. The total tally stands at 226 cases as of Sunday morning.

Two new COVID-19 cases have been reported in Karnataka on Sunday, taking the total number of cases in the State to 146.

A bulletin issued by the Department of Health and Family Welfare states that both the patients have a travel history to Dubai and returned to Bengaluru on March 22. The two patients, a 62-year-old female and a 68-year-old male, were quarantined at Akash Hospital, and did not have any symptoms till date.

The number of COVID-19 positive cases in Bihar rose to 32 on Sunday.

The latest patient is a 65-year-old man from Bhagalpur district. He had recently travelled to the UK.

The test samples of a recently deceased 60-year-old woman residing in the city’s Yerwada area has tested positive for COVID-19, making it the third death in Pune district, said authorities on Sunday even as Maharashtra’s total positive cases soared to 661, with 33 deaths.

According to Ajay Chandanwale, Dean of Sassoon Hospital, the woman with difficulties in breathing was brought dead to the hospital a couple of days ago. Her tests samples which were sent to the National Institute of Virology returned positive.

Sources further said that the woman was placed in isolation at the city’s Naidu hospital a few days back and discharged after testing negative. However, soon she started complaining of breathlessness and was rushed to the Sassoon Hospital where she was declared dead on arrival.

Former Karnataka Chief Minister H.D. Kumaraswamy alleged on Sunday Prime Minister Narendra Modi’s appeal for lighting lamps in the context of the fight against the coronavirus was a “hidden agenda” of the BJP and challenged him to offer a credible scientific and rational explanation for his call.

“Has the PM slyly asked the nation to observe a candle light vigil on the eve of foundation day of BJP? April 6 being its foundation day, what else can explain the choice of date & time for this event? I challenge the PM to offer a credible scientific and rational explanation,” the Janata Dal (Secular) leader tweeted.

The Madhya Pradesh Principal Secretary of the Public Health and Family Welfare, the seniormost bureaucrat in the department, tested positive for COVID-19 on Saturday even as the toll owing to the illness reached double digits in the State.

She tested positive along with an Additional Director in the Directorate of Health Services tasked with implementing strategies to combat the outbreak in the State, according to Sudhir Dehariya, Bhopal Chief Medical and Health Officer.

Prime Minister Narendra Modi has reminded people to light up lamps on Sunday night to show the country’s collective resolve to fight coronavirus.

“#9pm9minute”, the Prime Minister tweeted to remind people of the exercise.

Mr. Modi had on Friday urged people to switch off the lights at their homes and light up lamps, candles or mobile phone torches for nine minutes at 9 p.m. on April 5 to display the country’s “collective resolve” to defeat coronavirus.

New York State, the epicentre of the coronavirus pandemic in the U.S., continued to record the highest count of daily deaths from COVID-19 as a staggering number of 630 people died in a 24-hour period and Governor Andrew Cuomo said the outbreak in the state could peak in about seven days.

The state had recorded the highest single increase in the number of deaths from novel coronavirus in a single day between April 2 and 3 when 562 people had died, one person dying from the viral infection almost every two-and-a-half minutes.

A South African Muslim cleric, who recently returned from India after attending the Nizamuddin congregation, has died after contracting the novel coronavirus, according to his family members.

Moulana Yusuf Tootla, 80, attended the March 1 to 15 Tablighi Jamaat congregation in the Nizmuddin area, that has emerged as the epicentre for the spread of the coronavirus in different parts of India and abroad after thousands of people took part in it.

Tootla, who died on Tuesday, was buried after his body was collected in a bag by the Islamic Burial Council (IBC).

The Central government has decided to provide free testing and treatment of Coronavirus under the Ayushman Bharat Scheme.

This, it notes, will help more than 50 crore Ayushman beneficiaries to avail free testing and treatment in designated private hospitals across India.

Confirming this Dr. Indu (CEO) of Ayushman Bharat said this would allow beneficiaries to get timely and standard treatment.

14 new cases of coronavirus were reported from Gujarat out of which 6 are linked with Tabligh Jamaat congregation in Delhi.

A 61 year old female patient who tested positive for COVID-19 died in Surat.

Another death in Jaipur

An 82-year-old man who was tested positive for COVID-19 died in Sawai Man Singh Government Hospital in Jaipur. He was admitted to the hospital on Saturday.

Six new COVID-19 positive cases, including that of an 82-year-old man who died in Jaipur, were reported in Rajasthan today, bringing the total number of cases in the State to 182. Of this, 25 people have recovered.

Adding the 28 evacuees from Iran who have been tested positive in the Army camp, the total number of cases in Rajasthan is 210.

Two more COVID-19 related deaths have been identified in the State, said Tamil Nadu health officials. With this, the death toll in the State rose to five.

A bulletin from the health department identified the two patients as a 71-year-old man from Ramanathapuram and a 60-year-old man from Washermanpet. They had both been admitted to the Stanley Government Hospital prior to death.

China has reported 30 new cases of the novel coronavirus, including five locally transmitted infections, even as nine of the 13 administrative districts of virus-hit Wuhan city were declared ‘low-risk areas’ signifying a gradual return to normalcy, officials said on Sunday.

China’s National Health Commission (NHC) in its daily report said other than the 30 new confirmed COVID-19 cases reported in the mainland on Saturday, 47 new asymptomatic cases were also reported.

The NHC said 1,024 asymptomatic cases were still under medical observation, including 244 from abroad.

Premier League leaders Liverpool have furloughed some of their non-playing staff due to the COVID-19 pandemic and are holding talks about the prospect of salary deductions for players and senior staff, the club said on Saturday.

Liverpool added on their website that the furloughed staff would continue to receive 100% of their salaries.

Furloughed British workers can claim 80% of their wages up to 2,500 pounds per month as part of the government’s Coronavirus Job Retention Scheme, which means Liverpool will top up the remaining 20% of salaries for furloughed staff.

DRDO comes up with more products to tackle coronavirus

The Defence Research & Development Organisation (DRDO) has announced a few more products made by its scientists with indigenous technologies to combat coronavirus pandemic.

U.S. to witness toughest next two weeks due to rising coronavirus cases: Trump

U.S. President Donald Trump has warned the Americans of the toughest next two weeks as the number of confirmed coronavirus cases crossed three lakh-mark and the death toll stood over 8,000.

“Next two weeks are going to be very, very deadly. Unfortunately, but we are going to make it so that we lose as few lives as possible and I think we are going to be successful, Mr. Trump told reporters during a press conference at the White House that was also attended by Vice President Mike Pence.

About 42% of those confirmed positive for COVID-19 in India are between the ages of 21-40 years old, the Union Health Ministry said on April 4, for the first time throwing light on the demography of the disease in India. Only 17% of those testing positive were over 60.

The grounding of the country’s civilian aircraft has strangled a key source of weather data that the India Meteorological Department (IMD) uses for its forecasts. Officials, however, clarified that India’s annual monsoon forecast system was on track, with the first forecast scheduled to be issued in mid-April.

Aircraft relay data about temperature and wind speed in the upper atmosphere to meteorological agencies the world over and this is used in the dynamical models, the ones which are run on super computers and relied on to give weather forecasts three days, or even two weeks ahead. “Inputs from aircraft are important for the dynamical models as it determines the initial conditions for these models,” D.S. Pai, chief forecaster, IMD Pune, told The Hindu. “However for the monsoon forecast, which is a long-term forecast, this isn’t significantly affected.”

Chief Minister Edappadi K. Palaniswami on Saturday announced that shops selling essential items would stay open only between 6 a.m. and 1 p.m. from Sunday.

He said that all markets should strictly follow the prescribed physical distancing norms and advised against any type of religious congregation.

The number of COVID-19 positive cases from Dharavi rose to four on Saturday.

A 30-year-old woman, a resident of the same area as the first patient, along with a 48-year-old man from Dharavi’s Mukund Nagar, tested positive for the disease. This brings the total to four from the area, excluding a conservancy worker, who also tested positive.

Facebook
Twitter
Pinterest
WhatsApp
Previous articleCoronavirus: Iran to resume 'low-risk' economic activity despite continuing deaths
Next articleCovid-19 cases in Moscow near 4,000 as mayor says residents are at ‘HIGHEST RISK’ compared to other regions