Coronavirus | One more succumbs to COVID-19 in Guntur 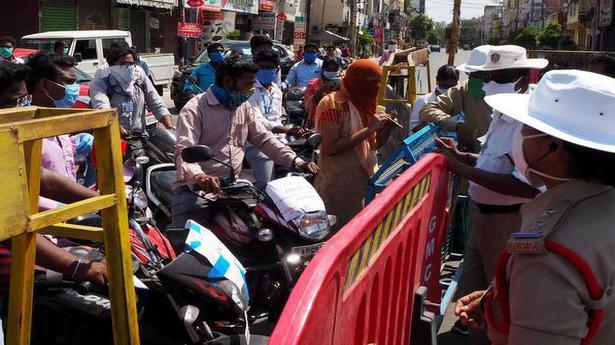 A 70-year-old woman from Dachepalli succumbed to COVID-19 on Saturday, taking the toll to two in the district.

Earlier this week, a 45-year-old man from Narsaraopet had died at the Infectious Diseases (ID) Hospital, where the doctors initially said he was a TB patient. However, the victim’s samples later showed that he had contracted coronavirus.

The woman from Dachepalli too was admitted with symptoms of lung infection. Her medical history indicated that she had been suffering from TB.

The day also witnessed a steep rise in the number of positive cases. With 14 new cases coming to light in the city, the tally in the district went up to 71.

Surprisingly, 10 of the new cases were from a single family residing at Kummari Bazaar, where a man, his wife, three sons, daughters-in-law and grandchildren were all infected.

District Collector I, Samuel Ananda Kumar announced several new measures in view of serious condition. He said a complete lockdown would be observed on Sunday when people would not be allowed even during the relaxation hours between 6 a.m. and 9 a.m. All shops, with the exception of medical shops, would remain closed.

“I urge people to stay indoors as the situation is turning serious. Please buy essential commodities to last for 15 days and ensure that you stay indoors. We are also thinking of relaxing the lockdown on alternative days. All these measures are aimed at containing the rapid spread of COVID-19,” the Collector said.

The district administration declared 12 containment zones in Guntur and all access roads to these areas had been blocked. “The local administration is making efforts to supply vegetables to the residents of these areas,” the Collector added.

Referring to the facilities at the quarantine centres, the Collector said quality food was being served to the patients for ₹50 a meal, which comprised dry fruits, fruits, eggs, and rice and vegetables.

Deputy Inspector General of Police, Guntur Urban, P.H.D. Ramakrishna, urged people not to stir of their houses as the spread of coronavirus was quite rapid in the district.

Superintendent of Police, Guntur Rural, Ch. Vijaya Rao, said of the 14 new cases, eight were linked to the Nizamuddin returnees.