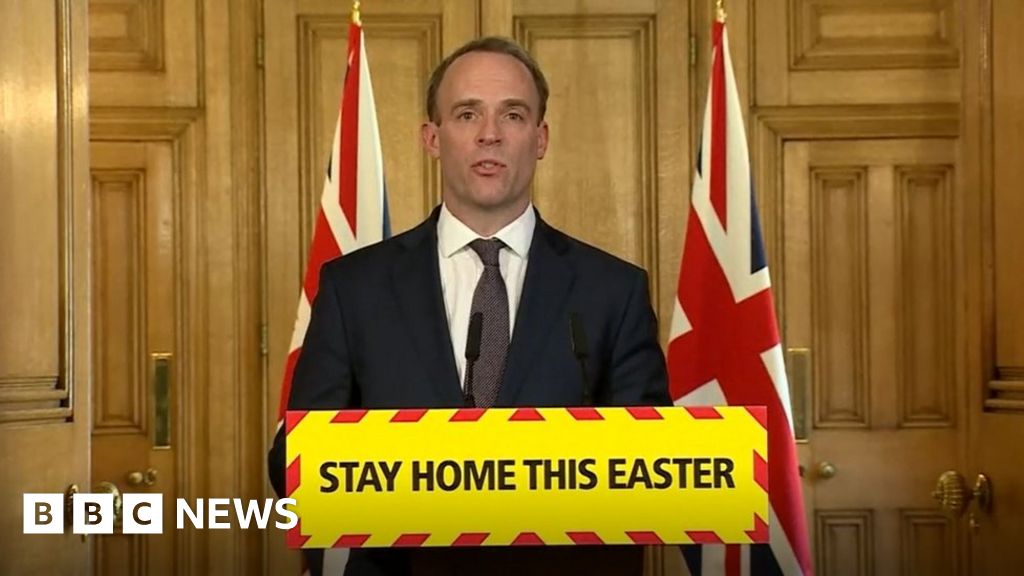 Foreign Secretary Dominic Raab has urged the public to stay indoors over this Easter weekend, telling people: “Let’s not ruin it now.”

He said after almost three weeks of lockdown “we are starting to see the impact of the sacrifices we’ve all made.”

Mr Raab said it was still “too early” to lift the restrictions.

A total of 7,978 people have now died in hospital after testing positive for coronavirus, up by 881 on Wednesday.

Speaking at the government’s daily briefing, Mr Raab said a decision on whether to ease the lockdown measures would not come until “the end of next week”.

But he stressed that the restrictions would have to stay in place until evidence showed the UK had moved beyond the peak of the virus.

He said: “After all the efforts everybody has made, after all the sacrifices so many people have made let’s not ruin it now.

“Let’s not undo the gains we’ve made, let’s not waste the sacrifices so many people have made.

“We mustn’t give the coronavirus a second chance to kill more people and to hurt our country.”

Mr Raab, who is deputising for the prime minister, said Boris Johnson was still in intensive care, adding that “he continues to make positive steps forward and he’s in good spirits.”

The announcement of another 881 deaths of people with coronavirus is yet another tragic piece of news.

And we know that the true death toll to date is higher: this figure doesn’t include people who have died with coronavirus but whose death has not yet been reported to the Department for Health and Social Care.

However this is a fall in the daily total compared to Wednesday’s announcement of 938.

Any fall in the daily figure is to be welcomed, but the scientists advising the government have warned that we shouldn’t be surprised if tomorrow’s figures once again set a record.

They have suggested that the peak of the epidemic may not arrive before next week.

The trends over the last week do suggest that the measures that everyone are taking are having an effect on the epidemic.

Until last Saturday, the number of deaths was doubling every three-and-a-half days, growing by just over 20% every day.

Since then, the growth in the number of deaths has halved, down to about 10% a day.

Even once we pass the peak, we will see more people fall victim to this virus – but there are growing suggestions in the data that the lockdown is having the expected effect.

There are now 65,077 confirmed coronavirus cases in the UK, an increase of 4,344 on Wednesday.