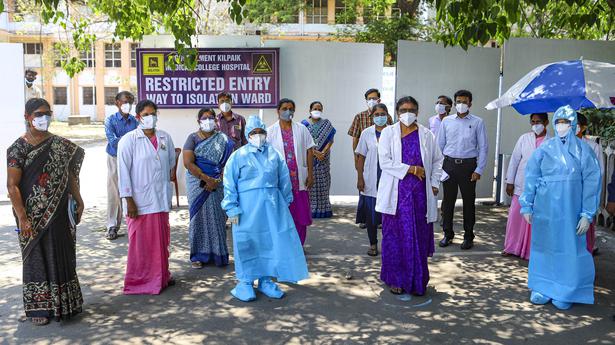 On a day when COVID-19 cases in Tamil Nadu went up by 58, taking the tally to 969, Chief Secretary K. Shanmugam emphasised that the State had adequate Reverse Transcription-Polymerase Chain Reaction (RT-PCR) kits, used for the diagnosis of the disease, as well as stocks of drugs such as hydroxychloroquine.

One patient died in Erode and another, in his fifties, died at the Rajiv Gandhi Government General Hospital in Chennai, taking the State’s COVID-19 toll to 11. The results of 485 patients were awaited.

Officials said the man who died in Chennai, an aircraft maintenance engineer with a private airline, had tested positive and was undergoing treatment. He was a diabetic.

Answering questions on the delay in arrival of rapid test kits and the efficacy of relying on PCR kits, Mr. Shanmugam said that 15,000 PCR kits were available. While the number was sufficient, the State continued to receive more. “When we get rapid test kits, we plan to cover all those in quarantine and containment zones, in addition to front line workers. But, only with the help of a PCR kit can we ascertain whether or not a person is a confirmed case,” he said.

Approximately, four lakh rapid test kits have been ordered by the State.

These are over and above what the Centre will supply to the State.

On the row over supplies from China, the Chief Secretary said only a limited number of companies were producing the kits. As the consignment, meant for India, was reported to have been diverted to the United States, it was expected that “our country will get the next consignment, in which Tamil Nadu will get 50,000 kits, in view of the State’s earlier order. We hope to get another 50,000 kits,” he said. Asked why the consignment went to the U.S., he said, “You all know the answer.”

Mr. Shanmugam said the State government had got even patients with mild symptoms admitted to hospitals despite the Centre’s advice of letting such patients remain at home.

As for converting public places into temporary wards, Mr. Shanmugam said that an official group had made an assessment of the State’s requirements. It had identified hotels, hospitals and large buildings, in which three lakh patients could be accommodated. The government, which was working on projections regarding the spread of COVID-19, would come out with its findings in a few days.

Asked whether the State government would bear the expenses for tests done at private hospitals, the Chief Secretary said that the Chief Minister was looking into the matter.

Facebook
Twitter
Pinterest
WhatsApp
Previous articleCoronavirus: 'We need Easter as much as ever,' says the Queen
Next articleDeath rate for coronavirus patients in intensive care increases to more than 51%