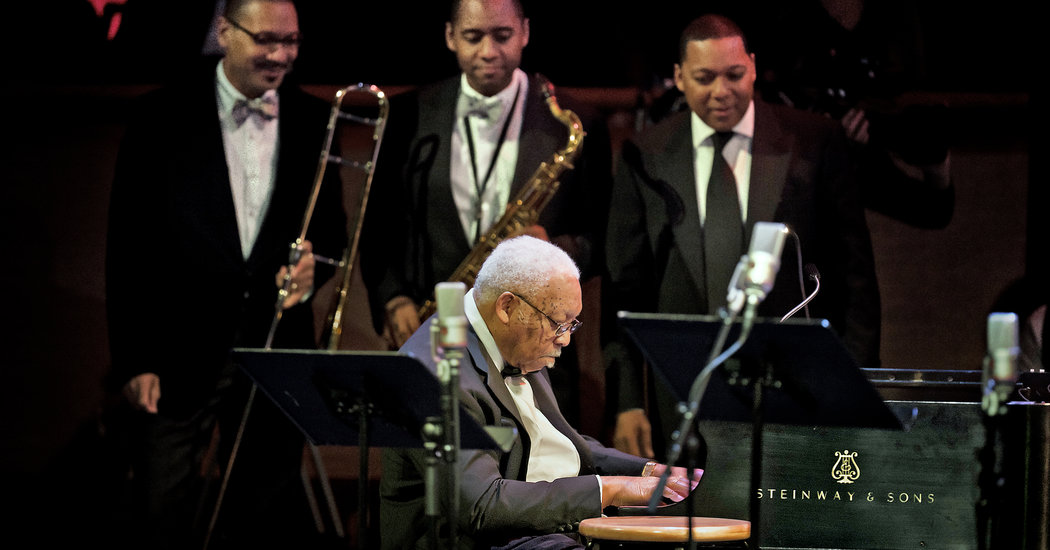 This obituary is part of a series about people who have died in the coronavirus pandemic. Read about others here.

Ellis Marsalis, a pianist and educator who was the guiding force behind a late-20th-century resurgence in jazz while putting four musician sons on a path to prominent careers, died on Wednesday in New Orleans. He was 85.

The cause was complications of Covid-19, the disease caused by the coronavirus, his son Branford said in a statement.

Mr. Marsalis spent decades as a working musician and teacher in New Orleans before his eldest sons, Wynton and Branford, gained national fame in the early 1980s embodying a fresh-faced revival of traditional jazz.

Mr. Marsalis’s star rose along with theirs, and he, too, became a household name.

“Ellis Marsalis was a legend,” Mayor LaToya Cantrell of New Orleans wrote on Twitter on Wednesday night. “He was the prototype of what we mean when we talk about New Orleans jazz.”

That was not always so. Mr. Marsalis’s devotion to midcentury bebop and its offshoots had long made him something of an outsider in a city with an abiding loyalty to its early-jazz roots. Still, he secured the respect of fellow musicians thanks to his unshakable talents as a pianist and composer, and his supportive but rigorous manner as an educator.

Once they reached the national stage, the Marsalises’ advocacy of straight-ahead jazz made them renegades of a different sort. Wynton, a trumpeter, boldly espoused his father’s devotion to heroes like Charlie Parker and Thelonious Monk, and he issued public broadsides against the slicker jazz-rock fusion that had largely displaced acoustic jazz during the late 1960s and ’70s.

Photogenic, erudite and fabulously talented, Mr. Marsalis’s children and many other young jazz musicians he had taught — including Terence Blanchard, Donald Harrison Jr., Harry Connick Jr. and Nicholas Payton — became the leaders in a burgeoning traditionalist movement, loosely referred to as the Young Lions.

“My dad was a giant of a musician and teacher, but an even greater father,” Branford Marsalis said in a statement. “He poured everything he had into making us the best of what we could be.”

In an acknowledgment of the patriarch’s influence as well as his own talents, the National Endowment for the Arts in 2011 named Mr. Marsalis and his musician sons Jazz Masters. It is considered the highest honor for an American jazz musician, and until then it had been awarded only on an individual basis.

By that point, the Marsalises were widely understood to be jazz’s royal family. Wynton had become the founding artistic director of Jazz at Lincoln Center in New York, the world’s pre-eminent nonprofit organization devoted to jazz, and he won the Pulitzer Prize for music in 1997. Branford was a world-renowned saxophonist and bandleader with three Grammys to his name. Mr. Marsalis’s two other musician sons, Delfeayo, a trombonist, and Jason, a drummer and vibraphonist, were well established as bandleaders.

In addition to those sons, Mr. Marsalis is survived by two nonmusician sons, Mboya and Ellis III; a sister, Yvette; and 13 grandchildren. Dolores Marsalis, his wife of 58 years, died in 2017.

In an interview with The New York Times Magazine in 2004, Wynton Marsalis said that his father had always led by example — expecting, rather than demanding, a high level of seriousness from his students.

“My father never put pressure on me.” he said. “He’s too cool for that kind of stuff.” Asked to define his father’s brand of cool, he explained: “The house could fall down and everyone would be running around, and he would still be sitting in his same chair.”

Mr. Marsalis started out as a saxophonist before switching to the piano in high school. He earned his bachelor’s degree in music education from Dillard University in New Orleans in 1955 and taught at Xavier University Preparatory School until enlisting in the Marine Corps in the late 1950s. There he became a member of the Corps Four, a quartet of Marines that performed jazz on television and radio to aid in recruitment.

After leaving the Marines he taught briefly in Breaux Bridge, La., then returned to New Orleans with Dolores and their four children to work at his father’s motel while playing shows at night.

Mr. Marsalis performed and recorded throughout the 1960s and ’70s with a variety of modern and progressive jazz musicians, including the drummer Ed Blackwell and the eminent horn-playing brothers Cannonball and Nat Adderley.

He later earned a master’s degree in music education from Loyola University in New Orleans and led the jazz studies program at the New Orleans Center for Creative Arts for high school students. It was there that he mentored such future stars as Mr. Blanchard and Mr. Connick as well as his own children.

He later taught at Virginia Commonwealth University and the University of New Orleans, where he served for 12 years as the founding director of its jazz studies department.

Always hungry for knowledge, Mr. Marsalis saw himself as a perpetual student. At the university, he said: “I’d like to get involved in a course on physics to get a good understanding of the physical aspects of the universe. There are literature courses I’d like to take. I might one day. I don’t buy the idea that colleges are just for young people.”

Reviewing a 1979 performance by Mr. Marsalis at the Carnegie Tavern in New York just before his family burst onto the national stage, John S. Wilson of The New York Times introduced him to his readers. “Unlike the widely accepted image of jazz musicians from New Orleans, Mr. Marsalis is not a traditionalist,” Mr. Wilson wrote, describing him as “an eclectic performer with a light and graceful touch” and an “exploratory turn of mind.”

Four years later, Mr. Marsalis made another New York appearance, at a next-door locale with a similar name: Carnegie Hall. There he gave a solo concert, oscillating between original compositions and jazz standards.

“Mr. Marsalis’s interpretations were impressive in their economy and steadiness,” the Times critic Stephen Holden wrote. “Sticking mainly to the middle register of the keyboard, the pianist offered richly harmonized arrangements in which fancy keyboard work was kept to a minimum and studious melodic invention, rather than pronounced bass patterns, determined the structures and tempos.”

Before Wynton and then Branford found acclaim, Mr. Marsalis had recorded only sporadically. But once they all became nationally known, that changed. In the 1990s, after the Young Lions boom he had helped unleash led major labels to reinvest in straight-ahead jazz, Mr. Marsalis released a series of albums for Blue Note and then Columbia.

In 2008, Mr. Marsalis was inducted into the Louisiana Music Hall of Fame.

He had held a weekly gig for decades at Snug Harbor, one of New Orleans’s premier jazz clubs, before giving it up in December.