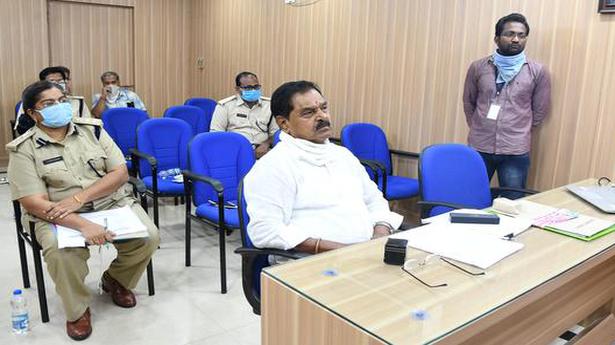 Deputy Chief Minister and Minister for Excise K. Narayana Swamy on Saturday alleged that a majority of violations in the excise policy was due to the involvement of the TDP leaders.

Addressing the media in Tirupati after a videoconference with the personnel of the Excise and Prohibition Department, Mr Narayana Swamy said all the violations would be viewed seriously. They could lead to the invoking of the PD Act, jail terms and huge penalties, apart from cancelling bar licences.

“Unfortunately, a small fraction of the department personnel are working hand-in-glove with the TDP leaders operating bars and encouraging illicit liquor dens. Such staff will face suspension and dismissal from service,” the Minister said, adding that stocks at all the wine shops and bars, before and after lockdown, would be verified, and the violators would be taken to task.

Referring to the appointment of new State Election Commissioner, he said it was in tune with the constitutional provisions.

TDP president N. Chandrababu Naidu was making it an issue to protect his vested interests, he alleged. Referring to the comments of JSP president Pawan Kalyan on the issue, Mr Narayana Swamy wondered what more could be expected of a “paid artiste.”

Referring to the lockdown to contain the spread of COVID-19, he said it was unfortunate that a section of the minorities were not cooperating with the officials in following the social distancing norm. “It is unfortunate that some of them are attacking and abusing the officials enforcing the guidelines,” he added. He appealed to the people to desist from gathering at places of worship and confine their prayers to their households.