FIR filed after marriage event amid lockdown in Bihar’s Madhubani 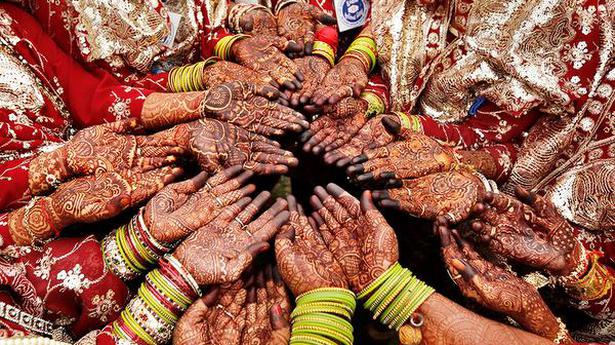 Amid the nationwide lockdown due to COVID-9 pandemic, a marriage event which saw the participation of many people happened in Madhubani district of Bihar and caught the attention of villagers and officials.

Later, an FIR was lodged against the village ‘mukhia’ (head) and others at the local police station under several Sections of the Indian Penal Code, the Disaster Management Act and The Epidemic Disease Act.

A video of the marriage too had gone viral on social media.

It shows a large number of people gathered under a concrete structure and the groom wearing a wedding turban being coerced into taking part in the ceremony. Village head Ajit Paswan and others too are seen watching the celebration.

It was said that a forced marriage (‘pakarua vivah’) took place, but later it was found out that the boy had a love affair with the girl who is sister of his brother’s wife.

The wedding was solemnised about a fortnight ago on March 27 and the decision to organise it was taken after other villagers agreed to it, the village head told a local journalist.

He denied that it was a forced marriage.

However, a member of the village panchayat samiti, Paltan Paswan, later filed an FIR (No: 46/20) against the village head and others at local Arer police station under various Sections of the Indian Penal Code, the Disaster Management Act and the Epidemic Disease Act.

The FIR said the marriage ceremony was held on April 8, 2020.

“An FIR has been lodged on the complaint by one Paltan Paswan and under investigation by one of our official R.C. Prasad,” said Arer Police station in-charge Rajkishore Kumar.

Madhubani District Magistrate Nilesh Deore too twitted to say that an FIR has been lodged in the case and appealed people to “stay at home, stay safe”.