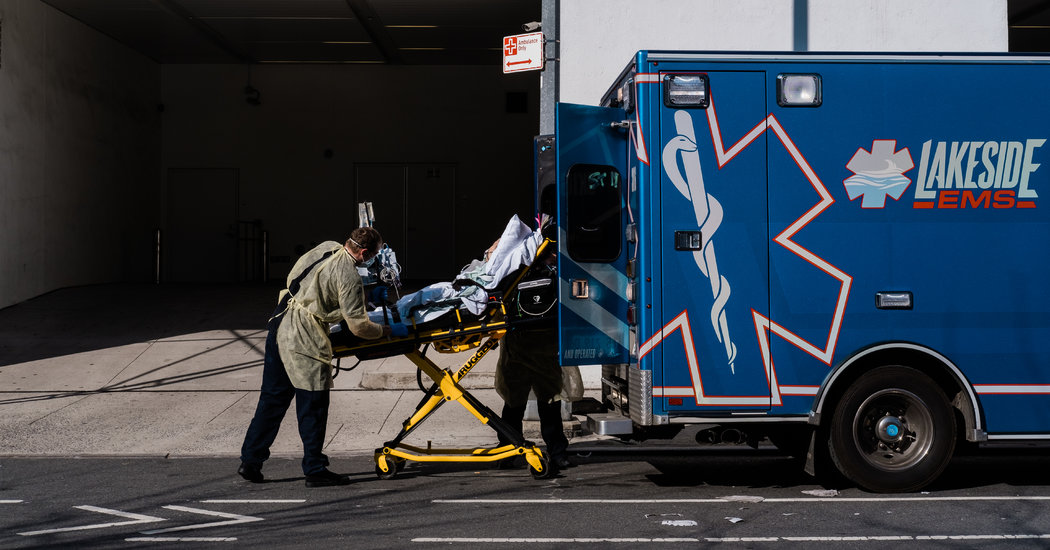 LOS ANGELES — Visa and airline ticket in hand, a Filipina nurse named Maria checked in recently for her flight from London to the United States, where a job awaited her as an intensive care nurse at a North Carolina hospital on the front lines of the coronavirus crisis.

But under the travel restrictions imposed by President Trump to help prevent new exposure to the virus, she was not allowed to board. “I was told that my visa is valid, and I would be allowed to travel once the restrictions are lifted,” she reported to the company that has been trying to bring her into the United States.

Hospitals in coronavirus hot spots are scrambling to address a shortage of medical professionals to help care for patients, as the number of cases continues to grow and as maintaining a full supply of health care workers, who are themselves falling ill, is challenging.

“I am asking health care professionals across the country, if you don’t have a health care crisis in your community, please come help us in New York right now,” New York’s governor, Andrew Cuomo, said on March 30.

In California, Gov. Gavin Newsom issued an urgent call at the end of March for additional health care workers to help fight the coronavirus outbreak, suggesting that recently retired physicians and medical students awaiting licensing could be brought in to help. “We need you,” he said.

Foreign health workers have been lining up to take jobs at American hospitals, but many are running into roadblocks. Some are having difficulty securing appointments for visas at U.S. consulates overseas that are hobbled by skeletal staffing. Others, like Maria, are running into travel restrictions imposed in the midst of the pandemic.

Still others are already working in the United States, but under the terms of their visas cannot leave the states they are in to work in cities heavily affected by the coronavirus.

“The protective gear and ventilators are slowly but surely getting to the system. But if the number of cases goes up dramatically, we will have equipment and no one to operate it,” said Ron Hoppe, chief executive officer of WorldWide HealthStaff Solutions, which matches medical professionals with facilities across the United States.

“The great supply and demand imbalance that existed before is being laid bare by the crisis,” he said.

Governors have called on retired physicians to return to work and asked medical schools to allow students to graduate ahead of schedule. Some hospitals are offering top dollar to woo nurses from other states.

Medical staff providers are also trying to speed up the import of qualified foreign health care workers, many of whom have been waiting years for permission to enter the United States — but the process has been full of logjams.

The State Department issued guidance late last month calling for foreign medical professionals with approved visas or certificates of eligibility for exchange visitor programs to make appointments at their nearest embassy to expedite processing, “particularly those working to treat or mitigate the effects of Covid-19.”

But many of those working to get medical help from overseas said there was an apparent lack of coordination between the various government agencies involved, including Citizenship and Immigration Services, the Department of Homeland Security and the State Department.

“There are gaps in communication at a time when they need to pull this together quickly,” said Beth Vanderwalker, vice president of operations at WorldWide HealthStaff Solutions. “We have hundreds of nurses who we could get here in a matter of weeks.”

Maria, the nurse in London, who feared that publishing her last name could jeopardize her green card, was turned away by American officials a second time when she tried to board a plane early this month, even though she said that she would be treating Covid-19 patients.

A few states that are facing major outbreaks have issued executive orders that allow some foreign health care workers who are already in the state to see patients. New Jersey, for example, is granting temporary licenses to doctors residing there who are licensed and in good standing in foreign countries. In New York, graduates of foreign medical schools are being permitted to treat patients after completing one year of residency, instead of the usual three.

However, the federal government has not broadly opened the way for foreign-trained workers to begin working.

Even before the coronavirus pandemic, demand for registered nurses in the United States was projected to grow from 2.9 to 3.4 million between 2016 and 2026, according to the Bureau of Labor Statistics.

The bureau had said an additional 203,700 nurses would be needed each year to fill new positions and replace retiring workers. However, only about 170,000 new nurses were licensed in the United States in 2018, the latest year for which data is available.

There is no guest-worker or nonimmigrant visa category for nurses. As a result, they must come to the United States with approved legal permanent residency, or a green card, a process that can take years to complete.

Meanwhile, hospitals in New York, New Orleans and elsewhere have been overwhelmed with patients, a backlog that sometimes forces people to wait hours to be admitted or to be sent home, potentially with life-threatening consequences.

“There are easy fixes that the administration should be willing to make in the face of a national emergency,” said Ian Wagreich, an attorney in Chicago who chairs the Government Liaison Committee of the International Medical Graduate Taskforce. The committee has been pushing various government agencies to take steps that would enable more foreign doctors to assist during the pandemic.

More than 25 percent of physicians in the United States are foreign-born, but a large share of them are in the country on visas that bar them from changing employers or moving to another state, even temporarily, a restriction that is making it difficult for them to move to virus hot spots.

For instance, there are more than 10,000 doctors on skilled-worker visas, or H1-B visas, who are only allowed to practice at the specific facility that sponsored them for their visas.

Ram Sanjeev Alur, an internist from India practicing at a veterans hospital in the small town of Marion, Ill., has watched as the pandemic has ravaged cities like New York.

Dr. Alur, the president of Physicians for American Healthcare Access, a nonprofit association representing foreign-trained doctors working in rural or underserved areas, said there were fewer than 10 confirmed coronavirus cases in the county where he works.

Dr. Alur said he was willing to relocate temporarily to a hospital where the need was greater. However, as an H1-B visa holder, “they restrict me to working only for my employer. I want to go work in New York; I can’t,” he said.

“In New York, they are asking retired physicians to come to work, medical school students to step up — I just think it’s a matter of no one realizing there is a way to boost the work force immediately,” said Dr. Alur, who came to the United States in 2007 for his residency training.

Raghuveer Kura, a nephrologist in Poplar Bluff, Mo., and a co-founder of the foreign doctors’ organization, said the group had compiled a list of doctors willing to go to New York and New Jersey to assist. But because of the rigidity of the government visa policies, nearly all of them are unable to do so.

“We are physicians trained at top U.S. institutions,” said Dr. Kura, who has been in the United States for 19 years. “People like me are not able to go to help in hot spots even though we can manage ventilators and we can manage I.C.U. patients.”

Varun Malayalah, an internal medicine hospitalist who practices in rural Delaware, said that he had been inundated with calls, texts and emails from recruiters representing hospitals that are grappling with the contagion.

“I would be there tomorrow, if it were possible,” said Dr. Malayalah.

He is 35, single and has a staggered schedule, one week on and the next off, the norm for hospitalists, or doctors who exclusively treat patients in hospitals.

“In the last month, instead of sitting home when I was off, I could have gone and worked where they needed me,” he said, were it not for the visa restrictions.

Representatives Tony Cárdenas and Zoe Lofgren of California sent a letter to Secretary of State Mike Pompeo and Chad F. Wolf, the acting homeland security secretary, urging their departments to allow foreign-born physicians and health care workers to practice freely during the crisis. The letter, sent April 6, was signed by 63 members of Congress.

“Many of these workers stand ready to serve our country but are unable to do so because of a lack of flexibility in their visa categories and other limitations in our immigration system,” the letter said.

It called on immigration-related agencies to expedite visa applications and provide emergency processing or other accommodations for some 4,000 foreign physicians scheduled to start residencies in the United States on July 1.

All told, there are about 1.5 million immigrants employed in health care in the United States as doctors, nurses and pharmacists. Another 263,000 immigrants and refugees with degrees in health-related fields are either performing low-level jobs or are out of work, according to a recent report from the Migration Policy Institute.

While two-thirds of them are proficient in English, their credentials may not be aligned with those required by the United States, and it can be difficult to pass exams and obtain licenses to become eligible to practice. The International Rescue Committee on Sunday launched an online platform for refugees and immigrants interested in obtaining health care accreditation.

Underutilized foreign-trained professionals have valuable linguistic and cultural skills that could be put to use, said José Ramón Fernández-Peña, president-elect of the American Public Health Association, and a doctor now advising students at Northwestern University.

They could consult with patients over the phone or by video, screen patients at hospitals or work at testing sites, and help with case management on the data side, he suggested.

Because these professionals might also speak the languages of underserved populations, he said, “we could reach the communities that are typically served last.”

A motorist was caught speeding at 151 mph near London after the coronavirus pandemic left many UK roads nearly empty over Easter weekend. ...
Read more
Uncategorized