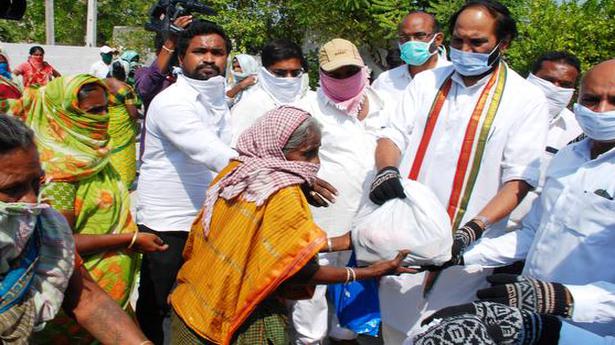 Sanitation workers who strive for cleanliness and hygiene in various wards of the municipalities during COVID-19 crisis are being treated badly by the government, Telangana Pradesh Congress Committee president and Nalgonda MP N. Uttam Kumar Reddy said on Saturday.

“I’ve met workers in Miryalaguda and on Saturday workers in Nalgonda. Both the groups said they are yet to receive their salary dues for the past two months. Is this the way to motivate our frontline warriors?” he wondered.

Speaking to press persons at the District Medical & Health Office, he said the sanitation workers were treated badly and demanded that the State government immediately release all dues and substantial incentives, while also pay full salaries to the employees, including contract and outsourced staff.

Speaking on the State of agriculture produce management he said sweet lime, a major crop with a close to ₹ 500 crore annual revenue in the district, should also be included in the ₹ 30,000-crore procurement plan of the State government.

The Congress leader reminded the recent instructions by the Supreme Court, on free COVID-19 diagnosis tests by private and government agencies, and wondered why the TRS government was not permitting ICMR-approved labs to ramp up testing.

“The assured 12-kg rice and ₹ 1500 to nearly 87 lakh BPL families, and nearly 3.5 lakh migrant population, is not achieved fully. The government should also clarify on the Centre’s promise of 15-kg rice distribution for the poor,” he said.