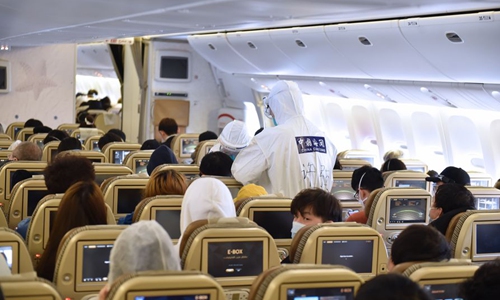 South China city of Guangzhou is tightening measures to control COVID-19 after imported cases from Nigeria caused local infections including the owner of a restaurant and two children.

According to a press conference on Tuesday in Guangzhou, five Nigerians living in Kuangquan Street, Yuexiu district of Guangzhou were confirmed to have contracted the coronavirus while in quarantine.

Four of the five Nigerians had frequently visited a local restaurant called Emma Food. Owner of the restaurant, a woman surnamed Zhuang, was confirmed to have contracted the coronavirus on April 2. Zhuang’s eight-year-old daughter, who was sent by her mother to Jieyang, a different city in Guangdong, was also infected and later transmitted the virus to a three-year-old boy in Jieyang, local health authority previously said.

So far, some 197 close contacts are put under quarantine, and 1,680 high-risk people had taken the nucleic acid tests. Samples from eight restaurants, nine hotels and 12 public places that the five imported cases had visited all came back negative.

To tightly control the COVID-19, Guangzhou has also upgraded the risk level of Yuexiu and Baiyun districts from low to medium.

Guangzhou has one of China’s largest African community due to its vibrant trade with the continent.

News of local infections had earlier sparked rumors that the Yaotai community that hosts many Africans in Guangzhou was in lockdown. But the local CDC denied the rumor on Tuesday saying people wearing masks can enter and exit with a health code after having their temperature taken.

The online rumor, however, reflected growing concerns over mounting pressure from imported cases on the southern Chinese city, where 111 imported infections have been reported so far. Among them, 25 are foreign nationals, with nine from Nigeria, three from Angola, two from Democratic Republic of the Congo and two from Niger. One each from France, Brazil, UK, Australia, Ethiopia, Syria, Burkina Faso, Madagascar and Russia has also been reported.

The city’s imported cases were detected through active screening measures. Among them, 57 were found at customs, 39 at quarantine centers, six during close contact management, six during community screening and three at fever clinics, spokesperson of the Guangzhou Health Commission Ouyang Ziwen said at Tuesday’s press conference.

Guangzhou has required people arriving from overseas to undergo central quarantine from March 27. The city has also screened people who arrived before the central quarantine policy was put in place as well as people coming from high-risk regions and via high-risk flights, enrolling 21,742 people into health monitoring mechanism.

The overall epidemic is under control but risk of sporadic cases and spread caused by imported cases still exists, said local official.