In life, Colleen Dilger’s 80-year-old mother was “a very social animal” who “never spent a moment by herself.” But the memorial service commemorating Sandra Stein following her death from cancer on March 26 is likely to be a much less social affair.

Due to coronavirus social distancing measures, the funeral home in Buffalo, New York, where the service is being held, is offering only two visitation options: Mourners can either walk past the casket one at a time, or drive by in their cars.

“It feels so incomplete because she always had family around her,” Dilger told me.

Dilger’s experience is quickly becoming the new normal. To help curb the spread of the coronavirus across the country, a number of US states have issued stay-at-home orders and banned gatherings of more than 10 people, including religious services.

Thus, funeral professionals and religious leaders now have to weigh a family’s need to mourn and the importance of conducting funeral rituals against both the safety of the larger community and potential legal consequences of violating state orders.

As a result, many funeral homes are severely restricting the number of people allowed to gather for visitations, memorials, and funerals, or offering alternative options like livestreaming. And even when a few close family members are allowed to attend a service in person, they’re often still required to maintain 6 feet of distance between one another at all times.

Which means the coronavirus that has interfered with so much of life is similarly interfering with all aspects of death. “The normal healing process has been disrupted,” Rabbi Elana Zelony of Congregation Beth Torah in Richardson, Texas, told me.

Memorial and funeral processes have changed in subtle but important ways since the coronavirus struck America.

Jeff Jorgenson owns funeral homes in California and Washington state. He told me that the timeline of services is now longer and the precautions he and his team take are much more thorough, but that most funeral homes still accept the bodies of people who have died of Covid-19.

For example, before the outbreak, Jorgenson would retrieve the deceased by going to a hospital’s security or admitting office and having a staffer accompany him to the morgue. But on a more recent hospital visit, he discovered that the process had gotten a lot more complicated.

“I had to go through screening, and then screening sent me up to admitting. Admitting sent me back to security, where security validated that I had been screened, and then I could go to the morgue,” Jorgenson told me. “It was two extra steps, really, but it added 25 minutes to transferring the person into my care. If you repeat that for three bodies, you’ve added about an hour and a half to your day.”

But that lengthened process only happens if a hospital and a funeral home can arrange a pickup. In New York City, the epicenter of the outbreak in the US, that’s not a guarantee.

Already, funeral homes are overwhelmed with the amount of bodies they’re taking. “There is just not enough capacity in the funeral homes in Queens and Brooklyn to handle the number of people dying right now,” Patrick Kearns, who owns the Leo Kearns Funeral Home in Rego Park (a neighborhood in Queens), told the New York Daily News.

When they do pick up a body, sometimes it’s not lying in the morgue, but rather in a refrigerated trailer outside of the hospital. The US government is expected to send 85 additional trucks to the city in the days ahead.

If the deceased’s family can’t arrange a transfer to a mortuary within eight days, New York City officials organize the burial or cremation process. That may include burying the body in a temporary grave in a public park until more space opens up in funeral homes.

For those families who are able to get their loved one transferred to a funeral home, there may still be delays in holding a memorial service. A funeral home in the city can’t hold more than three services a day, which allows staff to clean and disinfect in between families.

New York City’s funeral situation is much more dire than in most parts of the country, but there are challenges even in less hard-hit areas.

John Wenig, the president of Wenig Funeral Homes in a tight-knit community in Wisconsin, knows almost every client he has — which is why it was so hard for him to tell a woman whose husband died after 60 years of marriage that the funeral home couldn’t provide the services she wanted.

The reason has less to do with capacity than with state and federal guidelines. Basically, touching the body in any way — kissing, handholding, hugging — is highly discouraged to prevent the transfer of Covid-19. The social distancing rules are even more important, since visitations, memorial services, and funerals tend to draw large crowds. With most states restricting gatherings larger than 10 people, it’s impossible to hold such an event.

“That makes it hard on the grieving process for the whole family,” Wenig told me. “The elements of grief that are needed and most appreciated is the closeness of families coming together — the hugs, the kisses, holding each other. That is not happening right now, simply because families need to maintain the 6-foot distance.”

Wenig allows his clients to do small visitations and funerals, but is postponing all large memorial services until the summer at the earliest. “The deceased doesn’t know the difference during this period,” Wenig continued, “but the living do.”

Jorgenson also acknowledged the emotional hardship of these situations, but he is unapologetic about taking the necessary precautions.

“At this point in this pandemic, it’s my responsibility as a funeral professional to my community, and [to] the world at large, to not cause harm,” he said. “And if not causing harm in my community means you don’t get to see your dad … I’m sorry, this is bigger than you. That goes against most funeral professionals’ core being, but it’s the right thing to do.”

Rev. Bill Parnell, a leader in the Episcopal Diocese of Massachusetts, told me that many people in the 175 worshipping communities he helps oversee are struggling with the restrictions social distancing has put on their grieving process.

For instance, a retired priest died from the coronavirus two weeks ago in Cape Cod, leaving behind his wife, who is also infected. The priest’s family couldn’t visit him while he was sick, nor can they attend his funeral service because of travel and space restrictions.

“That’s just heartbreaking,” the reverend told me. “I can’t imagine what that must feel like.” It’s harder because now that church services have moved online — where attendance has actually grown, Parnell said — there’s no physical community to help console the grieving family. 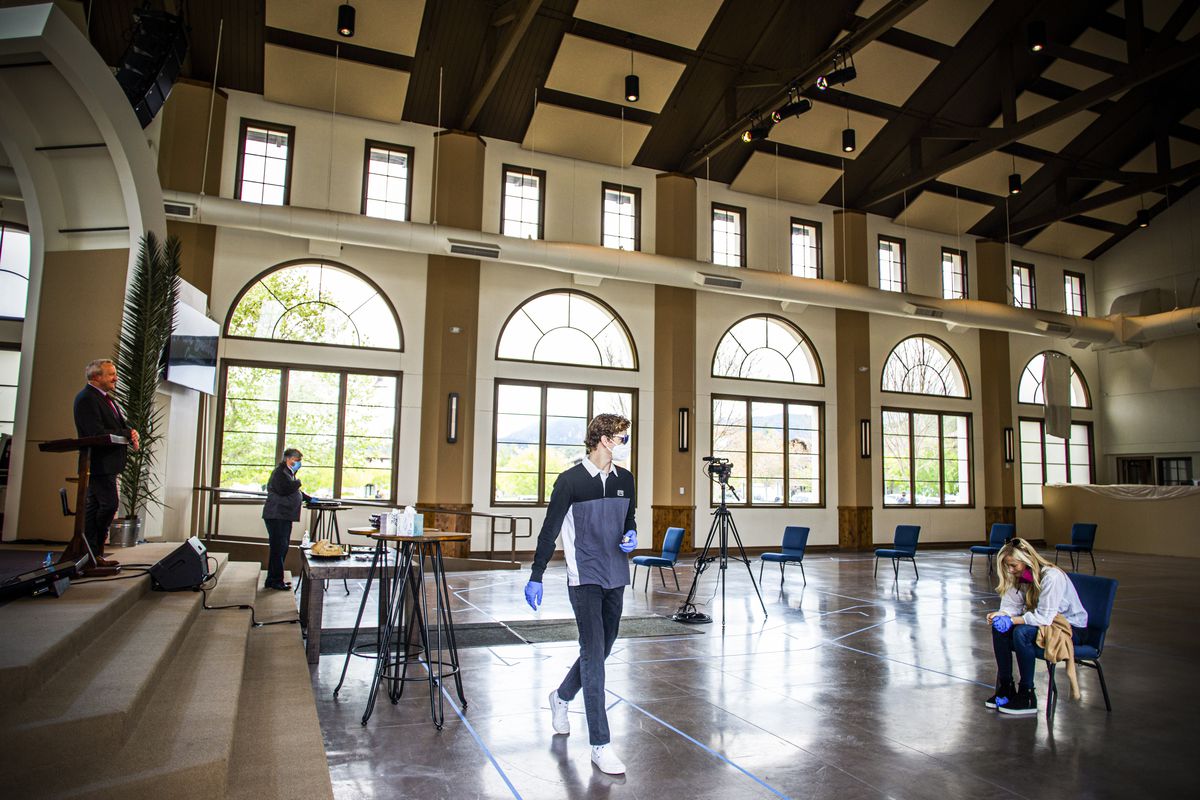 Zelony, the rabbi in Texas and the first woman to lead a Conservative movement synagogue in the state, has had a similar experience.

“I’m definitely grateful for the technology, but it’s so awkward,” she told me. “It’s much harder to read the body cues. I can’t hand them a Kleenex or give them a hug.” That bothers her, as “one of my jobs is to give people hope and support.”

Zelony also said that religious burial practices have been disrupted. Jews in the Conservative movement traditionally pour dirt into a loved one’s grave until it covers the top of the casket. That was easier to do when there were 50 to 60 people at a ceremony, she told me, but it’s much harder now, since no more than 10 can attend. “It made me notice the absence of having many community members to help,” Zelony added.

Families also can’t observe shiva, the weeklong mourning period in Judaism, as they did before, Zelony said. During this time, family and friends would normally stop by the home of the deceased’s family to offer food and condolences. But that doesn’t happen in the same way now, when few people are traveling and large gatherings are discouraged. “It’s just not possible in the same kind of way,” the rabbi said. “I’ve seen Jews take comfort in the traditions of mourning, and now they feel cheated.”

Many Muslims feel the same way. Imam Ibraheem Bakeer, from the Islamic Society of Greater Kansas City, told me that it’s customary in Islam for friends and family to gather and pray over the body of the deceased. Because of social distancing, that can’t happen — and it’s also why Bakeer is restricting visitations to no more than three people at a time.

Bakeer said he’s faced a lot of backlash for that decision. “It’s very tough, but our job is to convince these people and give them the conviction that we are in a bad situation and in critical circumstances,” he told me. “We can’t do the regular things, and they have to understand this.”

The CDC recommends several measures to help prevent the spread of Covid-19:

Alua Arthur is a “death doula” based in Los Angeles. Death doulas, sometimes called end-of-life doulas, are trained nonmedical professionals who offer emotional care and logistical planning and support to both people who are facing death (often in hospice) and their loved ones.

Arthur provides her clients with companionship and emotional support in their final days, as well as practical help taking care of the myriad administrative tasks surrounding death and estate planning. That support may involve just being a person to talk to or even opening mail when such a thing seems too hard in trying times.

But the coronavirus has upended that dynamic. Instead of being in the home of a client, Arthur uses FaceTime or other technology to stay in touch from home. It’s nowhere near the same, as she struggles to pick up on the nonverbal cues that allow her to do her job the best.

But the hardest part, she told me, is watching her clients and loved ones struggle with the uncertainty of death, especially as the coronavirus rages.

She believes this grief is more widespread than most let on. Covid-19’s ubiquity in our lives means “death is on everybody’s mind, when it wasn’t before,” Arthur said. adding that there’s “a sense of, ‘Oh, shit, I might die from this.’”

Countless people now have to get creative in the ways they grieve and mourn.

“It’s hard to find a new ritual and give it meaning,” Arthur told me. “It’s hard because you might have to break the mold [of a traditional memorial and funeral service, which requires] removing judgment about what we’re doing or not doing.”

“This isn’t about thinking outside the box, it’s about creating a whole new box — and that’s hard when we’re anxious and fearful and uncomfortable,” she added.

But whatever form it takes, remembering the ones we love the most may be one of the most important things any of us do during this time.