How France found itself in the middle of a coronavirus catastrophe

A member of the medical staff watches from the platform as a patient infected with the COVID-19 virus lies in a train at the Gare d’Austerlitz train station, Paris. With its hospitals overwhelmed, France has been sending COVID-19 patients to other countries for treatment. (Thomas Samson/Pool via The Associated Press)

Emmanuel Macron opened his official visit to Italy on Feb. 26 with a big two-cheek kiss for Prime Minister Giuseppe Conte. Then he was off for a 20-minute round of handshaking in the streets of Naples, even though the Italian coronavirus outbreak was already big news there.

In Paris on March 9, the day neighbouring Italy was locked down, Macron went strolling with his wife on the Champs-Élysées, telling restaurant patrons he wanted to “send a message of confidence to the French economy.”

In retrospect, it wasn’t such a great idea. France is now among the worst-performing countries in handling the outbreak. 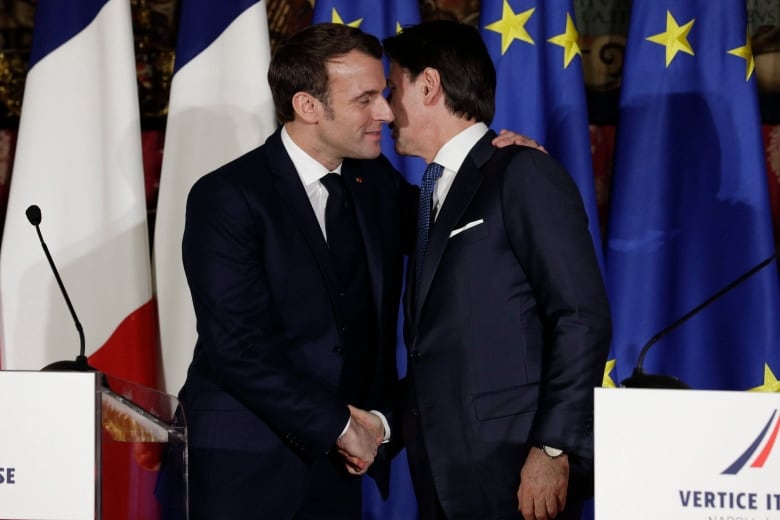 French President Emmanuel Macron and Italian Premier Giuseppe Conte came in close contact twice during their summit in Naples in late February, when the coronavirus pandemic was unfolding. Macron also embarked on a round of hand-shaking on the city’s streets. (The Associated Press)

“In France, the French president is like a king. He’s a republican king,” says Mathieu Magnaudeix, one of France’s top investigative journalists. “It’s very clear they didn’t grasp how important the situation was. It’s a failure of the whole system. It’s a failure of French executive power and especially the president.”

Occasionally, the president was challenged. On a Feb. 28 visit to a French hospital, he was confronted by a doctor about how public hospitals were effectively on fire like the famous Notre Dame Cathedral and needed his immediate attention.

Macron pushed back, saying, “OK, so I can count on you?” The doctor quickly responded, “Oh yes, you can count on me, but the opposite still needs to be proven.” 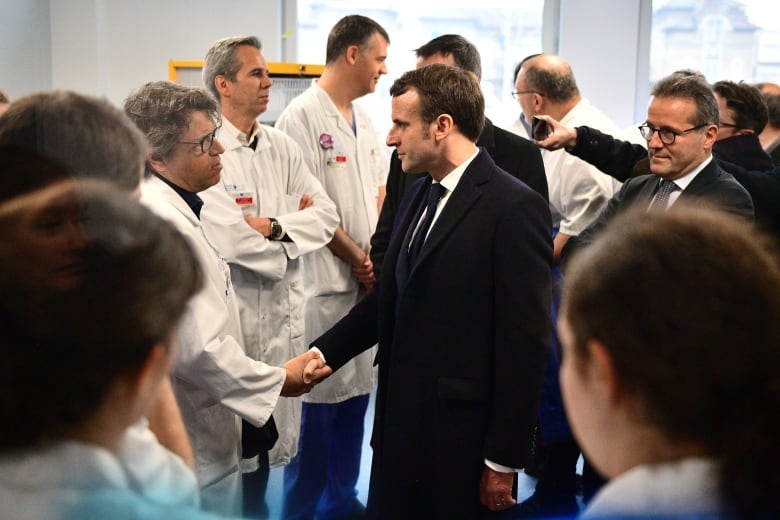 Before long, France was embroiled in a full-scale heath crisis, with so many cases of COVID-19 that hospitals and some seniors’ care homes were overwhelmed with patients. (MARTIN BUREAU/POOL/AFP via Getty Images)

There is a lot of anger directed at the French government right now, Magnaudeix says.

“We basically lost two months or three months, three very important months, where we could have helped prevent this pandemic from getting bigger and bigger in France,” he said. “After all of that is over, the government will have to be accountable for what they’ve done or not done.”

It wasn’t all the government’s fault. On March 12, Macron finally went on TV to announce he was closing schools and calling for physical distancing because France was now at war with COVID-19.

The very next day, the public flooded into Parisian terraces and courtyards to enjoy the sunshine with their friends and relatives. Many people seemed to pay no attention to the possibility that France could share Italy’s horrible fate. 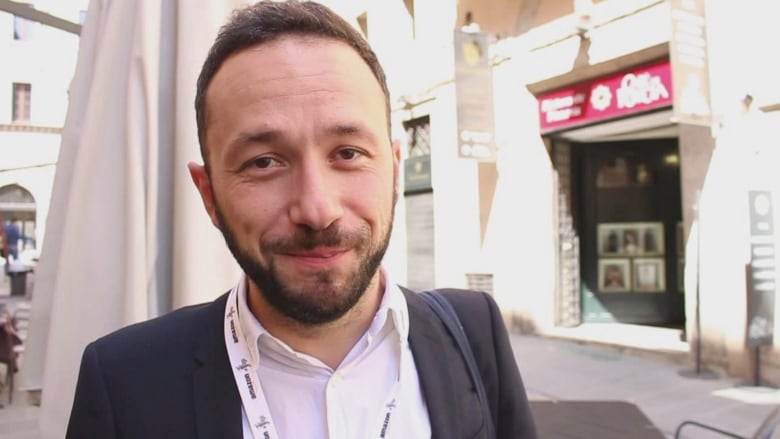 “Instead of thinking that those were examples, people just hoped for the best and they talked about the Italian scenario as if it was a Western movie made by Italians or something exotic. It’s ridiculous! The same causes tend to have the same consequences.” 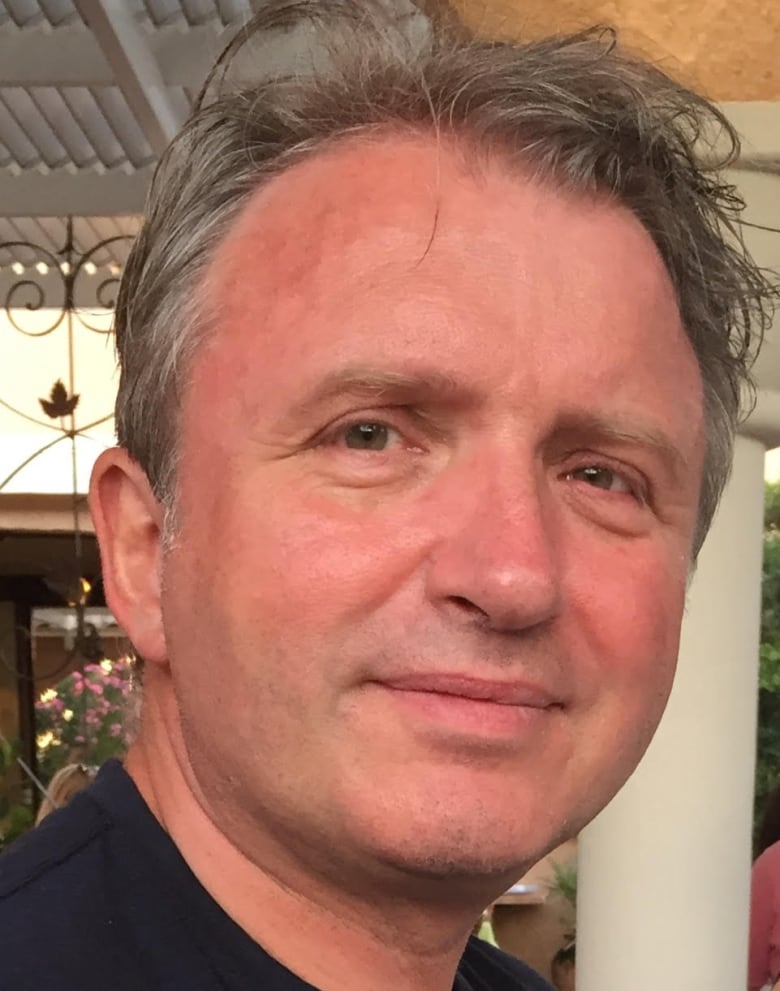 Eric Maury, an intensive care physician at Hôpital Saint-Antoine in Paris, said there are thousands more intensive care patients in France than its health-care system can handle. (Eric Maury)

Sure enough, the consequences have arrived. A tidal wave of COVID-19 patients is overwhelming France’s hospitals.

“Actually there are more than 7,000 patients requiring ICU, so we have actually more patients than France can treat in ICU beds,” he said.

France has responded to the shortage with an amazing mobilization of high-speed trains and aircraft to move patients from saturated hospitals in Paris and the eastern portion of the country to less busy hospitals in other regions, and even other countries.

“They sent patients to Germany, to Switzerland, to Luxembourg because [the system] was overwhelmed,” Maury said. “There were too many patients to take care of and there were no more ICU beds, no ventilators.” 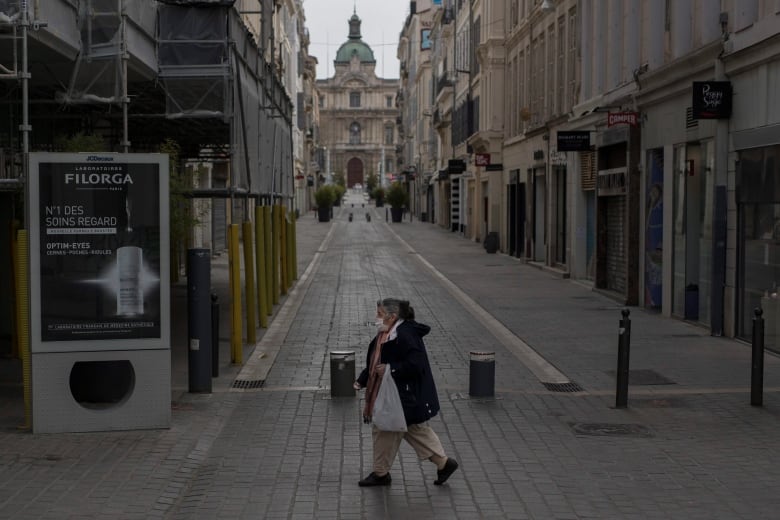 France claims to have a suspiciously low number of confirmed cases, but epidemiologists like Hill don’t believe it.

“My estimate is that you have to multiply the published figures by something like 50, so there’s an enormous gap,” she said.

The overconfidence shown by French President Emmanuel Macron as neighbouring Italy went into lockdown to contain COVID-19 was followed by a lack of regard for physical distancing recommendations and has resulted in the most lethal outbreak in the world.   6:05

There was a scandal in France when it turned out that a much-discussed stockpile of masks and other protective equipment was far smaller than promised. Macron toured a mask production line and promised more were on the way.

“What I am telling the government is if there is no protection, we are not going to take care of patients,” he said. “It’s not possible to do that.”

Even as France is flying patients to other countries, the government is announcing plans to return to normal.

Experts like Hill doubt that’s possible without a large increase in testing.

“Half of the contaminations are caused by individuals who do not know they are infectious,” she said. “There are millions of people in France who are positive right now. How do you release the quarantine? You really have to start testing massively to sort out the people who are contagious and bring them aside.”

And like Canada, France has a shockingly high proportion of deaths in nursing homes. 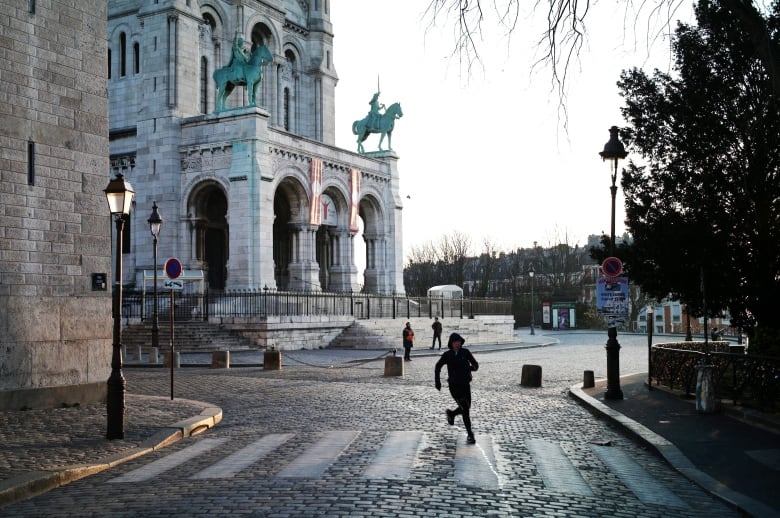 A man runs on the forecourt of the Basilica of Sacre-Coeur on top Montmartre hill during a nationwide confinement to counter the new coronavirus. (AP Photo/Thibault Camus)

It’s something Macron did not seem to see coming back on March 6, when he joined the dinner table at a Paris seniors’ residence and didn’t pay attention to physical distancing.

Today, the number of seniors who have died of COVID-19 in France is roughly 5,000. The deaths in seniors’ homes are perhaps the most shocking element of France’s lamentable coronavirus record.