For weeks, state legislators and health care providers across the country have called on the Trump administration to help with the lack of personal protective equipment (PPE) available to fight the coronavirus pandemic. The Trump administration has meanwhile argued it is the states’ responsibility to procure PPE, a stance that has led states to compete with one another for supplies — and that has led to confusion on the part of suppliers.

Since March, US hospitals have faced shortages as the disease became widespread: Health care workers say they’re rapidly running out of masks, gowns, gloves, ventilators, and other protective supplies to treat Covid-19 patients, some of which are necessary to protect doctors, nurses, and providers on the front lines.

Some workers are wearing bandanas and scarves as an alternative to masks, fashioning gowns from trash bags, and rationing or even reusing medical equipment. The federal emergency stockpile is nearly depleted and “the supply chain for PPE worldwide has broken down,” a DHS official told the Washington Post. The situation is dire, and states, especially those with increasing numbers of coronavirus cases, are desperate for supplies. However, the federal distribution of supplies has occurred unevenly and several actions taken by the Trump administration will likely make it harder for hospitals to get the PPE and ventilators they need in the weeks to come.

After President Donald Trump declared the coronavirus a national emergency in March, he instructed governors to order their own ventilators and other PPE, saying the federal government is “not a shipping clerk.” Trump added the administration will “help out wherever we can,” but state leaders say that current efforts aren’t enough — and that the Trump administration’s refusal to coordinate PPE distribution has forced them to compete with one another for supplies.

“It’s like being on eBay with 50 other states, bidding on a ventilator,” said New York Gov. Andrew Cuomo in a press briefing on March 31.

“We the states are trying to actively get every piece of PPE that we can. We’re bidding against one another, and in some cases, the federal government is taking priority,” Michigan Gov. Gretchen Whitmer said on CNN’s State of the Union.

A number of governors — including Massachusetts Gov. Charlie Baker — have said they’ve seen orders for masks and other needed equipment canceled because the federal government outbid them. This has led to some finding creative ways to disguise their orders to mask them from the Trump administration.

Baker’s administration worked with Patriots owner Robert Kraft, the Chinese UN ambassador, and other Chinese officials to secure a shipment of 1.2 million face masks to the state. The governor told reporters Thursday he worked with the Kraft family to create a “‘private humanitarian mission’ to keep the Feds from finding out” about the mask shipment and seizing it, according to reporter Adam Gaffin — and the masks came to the state on the Patriots’ team plane. 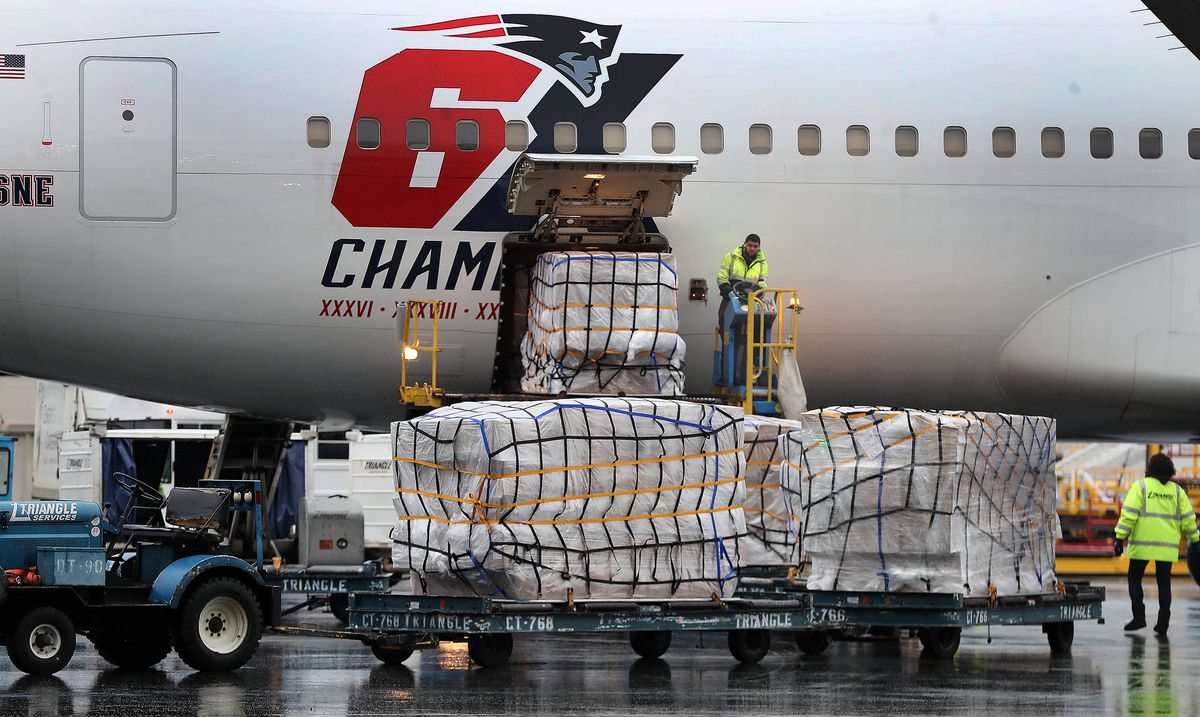 Masks are being unloaded from the New England Patriots jet, which was used to fly a massive shipment of more than 1 million N95 masks from China to Boston. Jim Davis/Boston Globe/Getty Images

Trump administration policy has left other states having to make similar extraordinary efforts to obtain PPE — for example, Illinois legislators rushed to deliver a $3.4 million check to a middleman at a McDonald’s parking lot so that the supplier he represented wouldn’t cancel the deal in favor of other, potentially more lucrative offers. They successfully handed off the check, and secured a shipment of 1.5 million N95 respirators from China.

The goods states have received from the Trump administration haven’t always been helpful. Local governments, in some cases, have received broken or damaged PPE. Montgomery County, Alabama’s shipment of 5,880 masks had dry rot and were expired, although the county later received a replacement order. The city of Los Angeles was also given 170 broken ventilators, which had to be repaired before use.

And distribution of medical supplies from the stockpile also appears to be uneven, the Washington Post reported in late March. Massachusetts officials said the city of Boston has received 17 percent of the protective gear it requested, while the state of Maine got a shipment of 25,558 N95 respirators, or 5 percent of what it sought. On the other hand, Florida has received all the supplies it requested — two shipments for 430,000 surgical masks, 180,000 N95 respirators, 82,000 face shields, and 238,000 gloves.

The amount of supplies left in the federal stockpile is dwindling, and as Recode’s Adam Clark Estes reported, it appears that what the US currently has on hand isn’t close to meeting the overall demand that’s expected to last through the coronavirus pandemic.

Critical medical supplies are being produced in the US, but instructions as to who will receive the products haven’t been made clear to suppliers — a situation that has reportedly left badly needed supplies sitting in warehouses. Manufacturers who are making PPE at the request of the Trump administration told CNN recently they have not yet heard whether they should ship their products to states, to FEMA for distribution, or elsewhere.

On March 24, the Advanced Medical Technology Association wrote a letter to FEMA, urging the Trump administration to decide “how to allocate these products in the most effective way” among state and local governments. “Some of these potential purchasers should have a higher priority than others based on the acuity of patient needs in their areas,” the letter read. “It is difficult for manufacturers to establish these priorities.”

The solution to this would be for the federal government to make greater use of the Defense Production Act, which would allow the Trump administration to coordinate production, procurement, and delivery. Trump, however, has made limited use of the act thus far, first to ask General Motors to manufacture ventilators, and later using the law to prevent the hoarding or exporting of critical medical gear like gloves and surgical masks — a move some in industry, like 3M, have warned “would likely cause other countries to retaliate and do the same.” As a result, 3M claimed, “the net number of respirators being made available to the United States would actually decrease.”

These policy choices ultimately mean there will continue to be delays in getting PPE into the hands of health workers, putting greater strain on hospitals and caretakers — and that local officials and hospital procurement officers will continue to have to take extraordinary measures to get PPE.