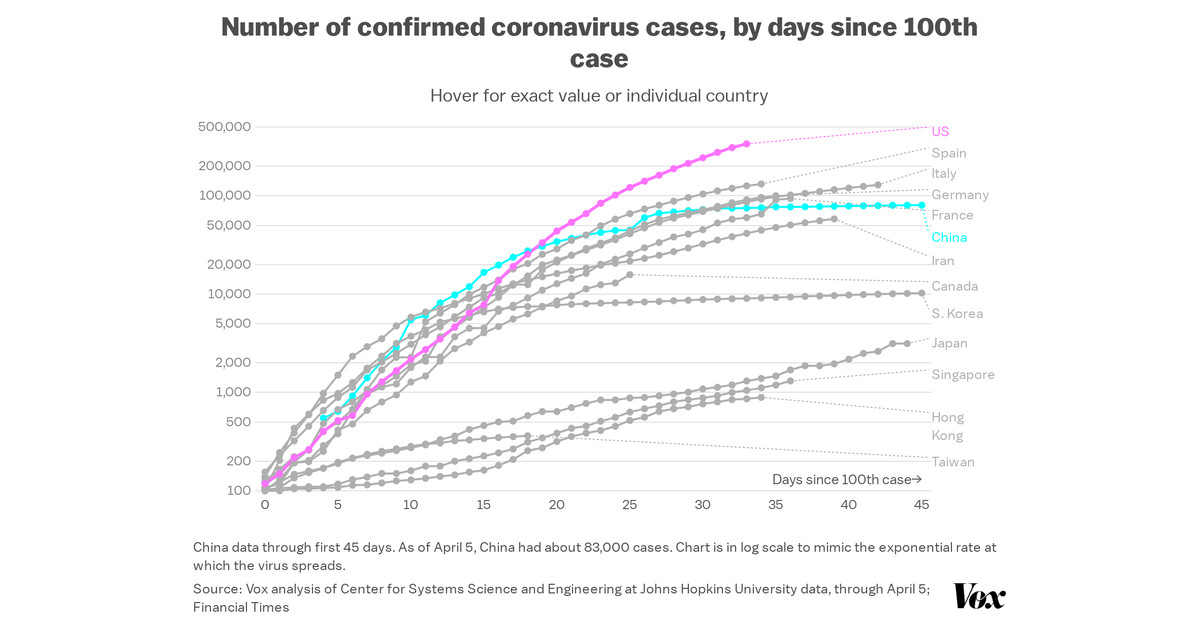 The United States has the most confirmed Covid-19 cases in the world, with four times the number of cases reported in China and more than twice as many cases as Italy and Spain, the other epicenters of this global outbreak.

America started off testing people for the coronavirus at a slower rate than most other developed countries, yet the number of people diagnosed with Covid-19 in the US has still been rising steadily, more quickly than our peers abroad. We don’t yet know the full extent of the outbreak, but America has become the focal point of the coronavirus pandemic.

The US health system was less prepared for a pandemic than those of other wealthy nations. A high uninsured rate, high out-of-pocket health care costs, and low medical system capacity combined to make the country more vulnerable to a pathogen before the coronavirus ever came to our shores. America’s lax response in the early days of the outbreak only compounded those problems.

“Everyone working in this space would agree that no matter how you measure it, the US is far behind on this,” Jen Kates, director of global health and HIV policy at the Kaiser Family Foundation, told Vox of the coronavirus response.

Here’s how the number of confirmed cases in the US compares to select other countries, based on days since each country reached 100 confirmed cases, according to data we analyzed from the Johns Hopkins University coronavirus dashboard.

Note that the chart uses a log scale, meaning that the Y-axis goes up in equal distances between 100, 1,000, and 10,000 to mimic the exponential rate at which a contagion like the coronavirus spreads.

Here’s that same chart on a traditional linear scale.

As of April 6, the Johns Hopkins research data shows more than 1.2 million confirmed cases worldwide, about 334,000 of which were in the US. The actual number of cases is likely much higher. More than 70,000 people have died across the world from Covid-19, including about 10,000 in the United States. The US has surpassed Iran, Italy, and even China in number of confirmed cases.

As the Wall Street Journal has reported, Chinese health officials recently acknowledged they did not include 1,500 asymptomatic cases in their previous national tallies, but said that such cases would be counted starting on April 1. And based on reporting by the South China Morning Post, China may be undercounting asymptomatic cases to an even greater degree. But remember, most countries’ numbers are probably low because people who have no or mild symptoms generally don’t get tested.

Going by the data we have, the US now has four times as many cases as China, the ground zero of the outbreak.

Case numbers in the US have also far outpaced places like Hong Kong and Singapore, where the governments mobilized more quickly. Japan’s case numbers also appear to be quite low, though the government there has been criticized over not having enough tests to properly judge the true number of cases. On the other hand, the number of deaths in Japan is small compared to the hardest-hit countries, suggesting better containment there than some European nations or the US.

As America implements dramatic measures to control the spread of Covid-19, with schools and businesses closing and general social distancing underway, the country still struggling to understand the full scope of the outbreak because of the slow start of testing. It has undeniably hindered the US response.

“The testing failure is putting additional strain on our already challenged health system,” Cynthia Cox, director of the Peterson-Kaiser Health System Tracker, said. “The combination of all of these factors will make the US worse off than similar countries.”

Testing is not only important because it gets people diagnosed and appropriate treatment if they do have an infection; it also establishes how widespread a virus actually is. Experts know the size of the problem, they know the rate at which people are being hospitalized or dying, and they can follow its movements.

But the United States has faltered in rolling out coronavirus tests, putting America far behind its economic peers in tracing the outbreak. A manufacturing problem with the test kits that were initially sent out in the field, and a delay in approving commercial tests, set the nation back in stopping or slowing down Covid-19.

Even as testing capacity has ramped up in the US, as of April 6, America is still lagging behind other places in the world hit hardest by the virus in the share of its population being tested. The US has tested about half as many people per million residents as Italy and South Korea. (Taiwan, one of the exceptions, has seen few confirmed cases so far.)

There have been nearly 1.8 million tests conducted in the US for its population of 329 million, but the number of tests per capita conducted varies greatly by state.

The US has finally started to catch up to the rest of the developed world in responding to Covid-19. But as case numbers and deaths continue to increase, we’re still learning the full scope of the crisis.