How will the global coronavirus pandemic end?

Health-care workers remove bodies from the Wyckoff Heights Medical Center during an outbreak of COVID-19 in the Brooklyn borough of New York City on Thursday. Experts say until we have an effective treatment or vaccine, we’re at the whim of a virus that shows no signs of slowing down. (Brendan Mcdermid/Reuters)

This is an excerpt from Second Opinion, a weekly roundup of eclectic and under-the-radar health and medical science news emailed to subscribers every Saturday morning. If you haven’t subscribed yet, you can do that by clicking here.

The coronavirus has infected more than a million people worldwide, and almost every country on earth has been hit by the pandemic with no clear end in sight.

A vaccine is at least a year away, and while effective treatments may come sooner, the global focus is now on containment efforts to prevent our health-care systems from being overwhelmed.

But the question remains — how will the pandemic end?

Experts say there are several likely scenarios that could play out, but for the time being we’re at the whim of a virus that shows no signs of slowing down.

One solution depends on achieving an adequate level of immunity in the global population in order to stop the continued spread of the virus.

Dr. Yonatan Grad, an assistant professor of immunology and infectious diseases at the Harvard T.H. Chan School of Public Health, wrote recently in an op-ed for STAT that there are two ways to achieve this: immunity from infection or immunity through vaccination.

“We hope that when you get infected with the virus, you develop sufficient immune protection to prevent subsequent infection, at least for a little while,” he told CBC News.

Antibodies arise after someone has recovered from COVID-19, but the timing can vary between individuals. The World Health Organization says the average recovery time for mild cases is about two weeks and three to six weeks for patients with severe disease. Patients can still infect others for up to two weeks after symptoms disappear.

So in the absence of a vaccine, how do we collectively achieve immunity?

“One possibility is to just let it go and have the epidemic run through the population. And we think that’s a bad idea, obviously, in that it would result in a large number of deaths and likely challenge or overwhelm the health-care infrastructure,” he said.

“Second, you could do what most of us are trying to do — half of the world’s population is in some form of physical distancing. By decreasing the contact with other people, we’re slowing the spread of the virus and flattening the curve.”

Tarik Jašarević, a spokesperson for the World Health Organization, told CBC News that while it’s too early to know when or even how the pandemic will end, the course of the outbreak will be determined by the action countries around the world take.

But that’s not a comforting thought for experts like Steven Hoffman, director of the Global Strategy Lab and a global health law professor at York University who studies pandemics.

“I’m not sure every government in the world has a clear end game in mind for its citizens. I haven’t seen any country that has articulated fully and transparently its specific strategy to get back to normality,” he said.

“That, for me, is worrisome. Although maybe the exit strategy is just to watch and see and make decisions on that basis.”

Almost four billion people are currently undergoing some form of physical distancing in response to the pandemic, but these measures aren’t long-term solutions. 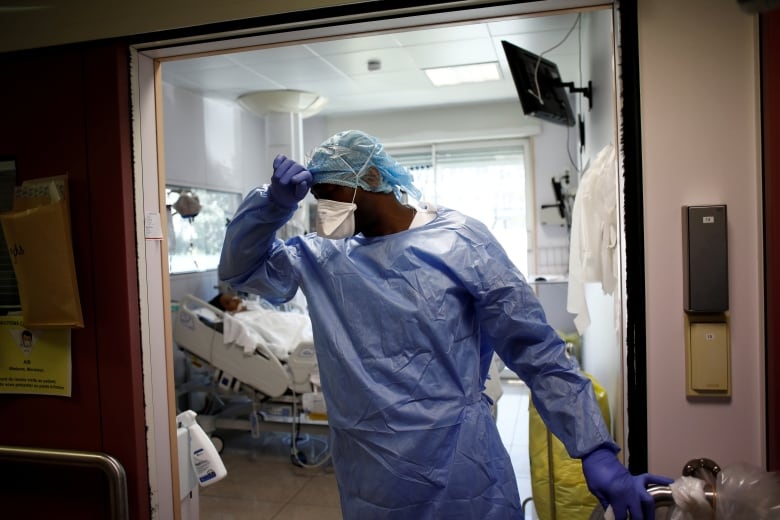 Medical staff work on COVID-19 patients at the intensive care unit at Ambroise Pare clinic near Paris on Wednesday. Without a vaccine or treatment, the global focus is now on containment efforts to prevent our health-care systems from being overwhelmed. (Benoit Tessier/Reuters)

“Physical distancing measures can slow down the virus, so the health-care system can cope, but they will not stop this pandemic purely in their own right,” Jašarević at the WHO said.

“To turn the pandemic around, countries need to invest in a comprehensive and blended approach. To suppress and control epidemics, countries must isolate, test, treat and trace.”

Countries like China, South Korea and Singapore have all been successful with using this comprehensive approach to containing the spread.

But it’s not without its limitations.

“The concern with this approach is that there will be a substantial amount of the population that remains susceptible,” Grad said, adding that any resurgence of the virus could be devastating.

“If there were introductions of the virus into the population, you’d worry about outbreaks.” 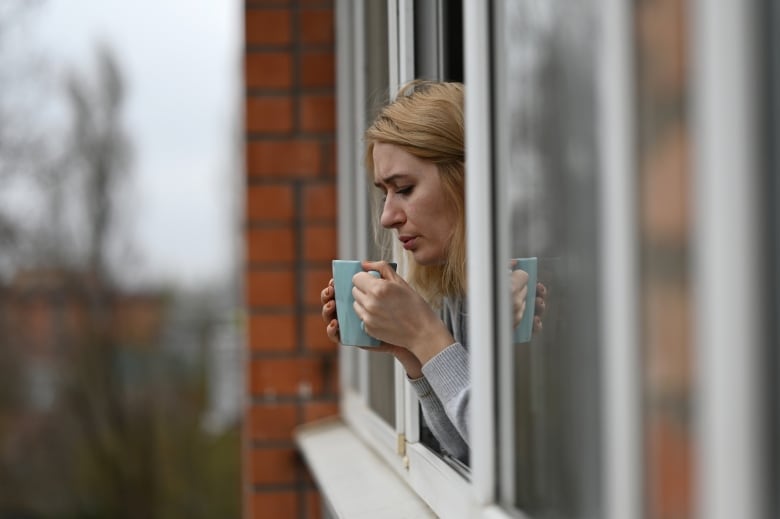 A woman drinks tea during self-isolation at home in the southern city of Rostov-on-Don, Russia on Monday. Almost four billion people are currently undergoing some form of physical distancing in response to the pandemic, but these measures aren’t long-term solutions. (Sergey Pivovarov/Reuters)

Raywat Deonandan, a global health epidemiologist and an associate professor at the University of Ottawa, said this approach will keep new cases at a “simmering boil” but alone is not a solution.

“There is a threat if we were to return just en masse as society, the disease will come back,” he said. “Then we have to lock down again.”

Grad and his research team have also been modelling the effectiveness of this concept, which he calls “intermittent distancing.”

“If the problem with one-time distancing is that we risk resurgence, well then what about if you do distancing multiple times?” he said.

“Our results suggest that it would have to be multiple rounds of distancing if we wanted to try to address the problem that way and it would also require incredibly good surveillance in order to time it correctly.”

How can we end the pandemic sooner?

Jašarević said the WHO has received applications for 40 diagnostic tests, more than 50 vaccines are in development, and many clinical trials of therapeutics are already underway — with results expected in several weeks.

In the meantime, strengthening the surveillance of suspected and confirmed cases of COVID-19 is essential to the effectiveness of ongoing efforts to contain the spread of the virus until treatments or a vaccine are widely available.

But contact tracing is notoriously time consuming, and it can take days to confirm a case through testing, systematically identifying anyone who may have come into contact with them and then isolating them to prevent wider spread. 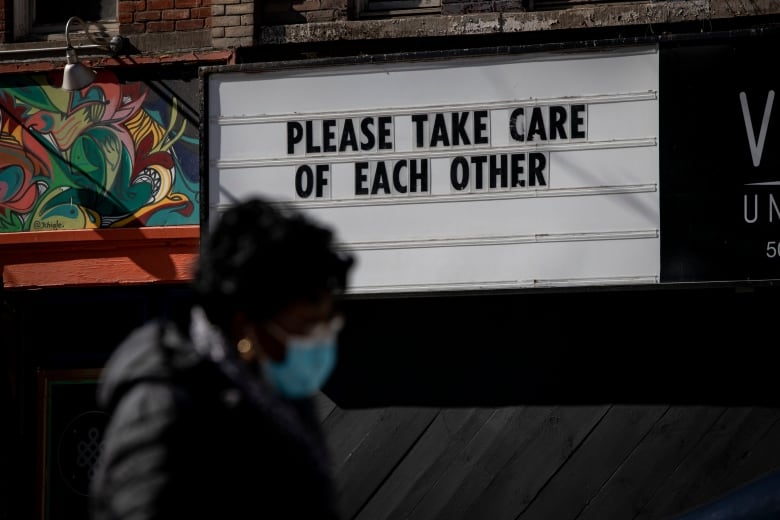 Christophe Fraser at Oxford University says improving traditional contact tracing is especially important in the current pandemic, given that up to 50 per cent of COVID-19 transmissions occur before people even present symptoms. (Evan Tsuyoshi Mitsui/CBC)

That’s a problem researchers at the University of Oxford’s Big Data Institute in England are working to solve quickly, and their results were published in a paper in the journal Science earlier this week.

They’ve designed an app that can trace the locations of contacts through cell phone data and notify them individually that they have come into contact with someone who tested positive for COVID-19.

“You realize with a pandemic of this scale that there are some really fast and effective measures needed to retrace who we’ve come into contact with,” Prof. Christophe Fraser at Oxford’s Nuffield Department of Medicine said in an email to CBC News.

Fraser said bolstering traditional contact tracing is especially important in the current pandemic, given that up to 50 per cent of COVID-19 transmissions occur before people even present symptoms.

“Our mathematical models suggest we can use this approach to reduce transmission at any stage of the epidemic, for example to ease countries out of prolonged lockdown,” said Dr. David Bonsall, senior researcher and clinician at Oxford’s John Radcliffe Hospital.

“Once this mobile app is installed, we have the capability to send all those at-risk people an infectious person has come into contact with a message to go home and self-isolate.”

Bonsall said the approach could protect health systems, save lives and bide time until vaccines and treatments could become widely available.

“Together we can help to protect our health systems, save lives and livelihoods, and bide some time until vaccines and antiviral treatments become widely available.” 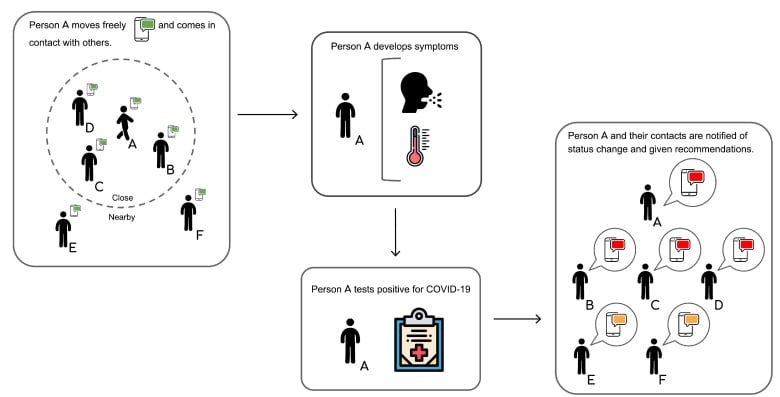 A visual representation of how a contact tracing mobile app could be effective in stopping the spread of COVID-19. (Oxford University Big Data Institute)

Grad, at Harvard, said the “clever approach” could amplify and improve contact tracing efforts, but it’s only one piece of the solution.

“Contact tracing with quarantine and isolation is one approach for containment,” he said. “But it would just be something you would need to keep on doing until you get population immunity in some way. It’s not in itself a long-term solution.”

Grad said serological testing — blood tests that can detect if someone has been infected and has antibodies against the virus — is the next key factor in developing an effective treatment for COVID-19.

“It’s the critical piece,” he said.