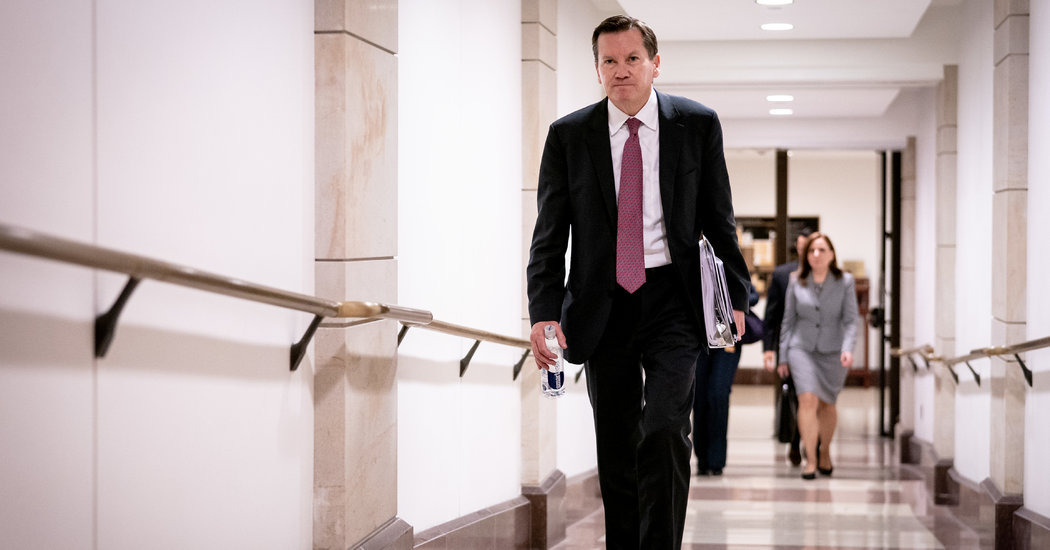 WASHINGTON — The intelligence community inspector general whom President Trump fired late Friday night has called on whistle-blowers to overcome any fears and come forward with information about waste and illegality in the government despite the administration’s reprisals.

“The American people deserve an honest and effective government,” the fired official, Michael K. Atkinson, said in a lengthy statement late on Sunday. “They are counting on you to use authorized channels to bravely speak up — there is no disgrace for doing so.”

He added: “Please do not allow recent events to silence your voices.”

Mr. Atkinson, who was appointed by Mr. Trump in 2018, drew the president’s ire last year after he received a whistle-blower complaint from an intelligence community official accusing the president of abusing his power over foreign policy to coerce Ukraine’s government into announcing investigations that could deliver him personal political benefits.

Mr. Atkinson deemed the complaint to be credible and to have raised an “urgent concern.” Under a federal whistle-blower law, if the intelligence community inspector general makes such a determination, the Office of the Director of National Intelligence “shall” disclose it to Congress.

But the Trump administration initially attempted to withhold it from lawmakers, before reversing under political pressure. The impression that the White House was trying to cover something up supercharged the dispute, which quickly prompted the impeachment inquiry.

While Mr. Trump’s letter to Congress gave no reason for firing Mr. Atkinson, he made clear at a news briefing about the coronavirus pandemic on Saturday that he dismissed Mr. Atkinson because he was angry that the inspector general had pushed to tell Congress about the whistle-blower complaint in the first place.

“He did a terrible job, absolutely terrible,” Mr. Trump said, adding: “He took a fake report and he brought it to Congress with an emergency, OK? Not a big Trump fan, that I can tell you.”

Although witness testimony during the impeachment inquiry confirmed the essential facts of the complaint, Mr. Trump also continued to portray it all as a hoax. He also continued to assert that the issue was only a “perfect” phone call he had with Ukraine’s president — in which a rough transcript shows he pivoted from discussing the prospect of military aid to asking for political investigations as “a favor, though” — even though the impeachment inquiry and news media reports showed it was instead a monthslong pressure campaign on Kyiv by his proxies.

In his statement, Mr. Atkinson stressed that protecting whistle-blower identities should be a nonpartisan issue and defended his handling of the Ukraine matter as fulfilling his obligations under the law.

Democrats have decried Mr. Trump’s firing of Mr. Atkinson as corrupt. Republicans have largely been silent, although Senator Charles E. Grassley, Republican of Iowa and long a defender of whistle-blower protections, has said he wants more “written reasons” about Mr. Trump’s reasoning for removing the inspector general.

The Democratic-controlled House impeached Mr. Trump for abuse of power and obstruction of Congress in the Ukraine affair. The Republican-controlled Senate then swiftly acquitted him without hearing witnesses.

A key vote in protecting Mr. Trump from witnesses, Senator Lamar Alexander, Republican of Tennessee, said that the evidence proved Mr. Trump did withhold aid from Ukraine for personal political benefits, but said while that was “inappropriate,” it was not an impeachable offense. Several key Republicans said Mr. Alexander’s view was widespread.

Mr. Trump has subsequently been purging federal officials he sees as disloyal because they testified about what they knew when Congress subpoenaed them during the House inquiry phase. Mr. Atkinson became the latest, and Mr. Trump told congressional leaders that he had lost confidence in him.

“It is hard not to think that the president’s loss of confidence in me derives from my having faithfully discharged my legal obligations as an independent and impartial inspector general, and from my commitment to continue to do so,” Mr. Atkinson wrote, saying he was disappointed and saddened by the removal.

By law, the inspector general for the intelligence community cannot be removed until 30 days after Congress has been notified of the president’s intent, but the Trump administration circumvented that limit by also immediately placing Mr. Atkinson on administrative leave.

From 2016 until Mr. Trump appointed him as inspector general in 2018, Mr. Atkinson worked in the Justice Department’s National Security Division. Since his firing, some of Mr. Trump’s supporters have been trying to link Mr. Atkinson to responsibility for widespread problems with F.B.I. applications for national-security wiretaps or for the investigations into Hillary Clinton’s use of a private email server and into Russia’s election interference and the Trump campaign.

But Mr. Atkinson had no role in wiretap oversight or in the Clinton and Trump-Russia investigations, according to Mary McCord, the acting head of the division from 2016 to 2017. She said he instead worked on cybersecurity, economic espionage, export control and foreign investment review issues.