Japan preparing to declare state of emergency to COVID-19 fight

Japanese Prime Minister Shinzo Abe takes off mask as he speaks to reporters at the prime minister’s official residence in Tokyo on Monday. Abe said that he will declare a state of emergency for seven prefectures, with Japan also launching its largest ever stimulus package. (Yoshitaka Sugawara/Kyodo News via AP)

Japanese Prime Minister Shinzo Abe said that he will declare a state of emergency for Tokyo and six other prefectures as early as Tuesday to bolster measures to fight the coronavirus, but that there will be no hard lockdowns.

Abe also told reporters Monday that his government will launch a 108 trillion yen ($1.4 trillion Cdn) stimulus package — Japan’s largest ever — to help counter the economic impact of the pandemic, including cash payouts to households in need and financial support to protect businesses and jobs.

Abe said experts on a government-commissioned task force urged him to prepare to declare a state of emergency, with the COVID-19 outbreak rapidly expanding in major cities including Tokyo, and hospitals and medical staff overburdened with patients. He said the state of emergency will cover Tokyo, Osaka, Fukuoka and four other hard-hit prefectures, and will be in effect for about a month.

National broadcaster NHK identified the other prefectures as Kanagawa, Saitama, Chiba and Hyogo.

Measures are expected to include a stay-at-home request for residents, but there will be no penalties for objectors. Public transportation, banks, groceries and other essential services will continue operating.

Abe said the state of emergency is intended to further reinforce social distancing between people to slow the spread of the outbreak, and to maintain as much social and economic activities as possible.

“But we need to ask everyone to step up co-operation,” he said.

The government enacted a special law in March that paved the way for Abe to declare a state of emergency. The law, however, is a divisive one because it could limit civil rights.

Abe said he will hold a news conference on Tuesday to further explain the state of emergency.

The economic package — which amounts to about 20 per cent of the GDP of Japan, the world’s third-largest economy — will pay out 300,000 yen ($3,890 Cdn) to each household with severe income loss due to the outbreak, and will include 26 trillion yen ($337 billion Cdn) to address delays in taxes and social welfare payments, Abe said.

“It’s to protect the people’s health and their lives,” he said. 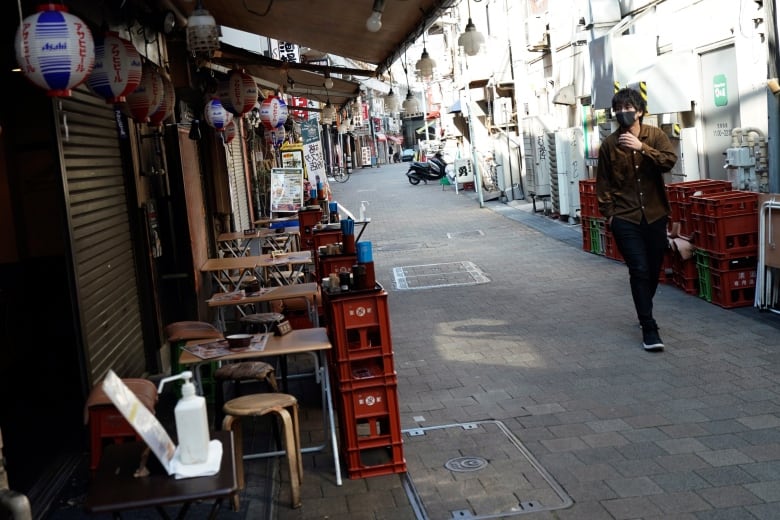 A man with a protective mask walks an empty restaurant street Monday in Tokyo. The city’s governor has warned about a potential ‘infection explosion’ unless stricter distancing and lockdown measures are taken. (Eugene Hoshiko/The Associated Press)

Tokyo Gov. Yuriko Koike said the city will start transferring patients with no or slight symptoms from hospitals to hotels and other accommodations to make room for an influx of patients with severe symptoms.

Koike has raised alarms over the acceleration of the outbreak in the Japanese capital since late March, warning of an “infection explosion” and saying that the only way to avoid a complete lockdown of the city is to follow guidelines such as social distancing.

Haruo Ozaki, head of the Tokyo Medical Association, said that the situation in Tokyo “is already critical.” He said Tokyo’s infections are on the brink of being out of control due to a lack of restraint by residents.

Japan had kept its number of coronavirus cases relatively low by closely watching clusters and keeping them under control rather than conducting massive tests, but that strategy has become increasingly difficult because of a sharp rise of unlinkable cases.

Japan’s health ministry has confirmed 3,654 cases, including 84 deaths, as well as another 712 infections and 11 fatalities on a cruise ship that was quarantined in the port of Yokohama near Tokyo earlier this year.