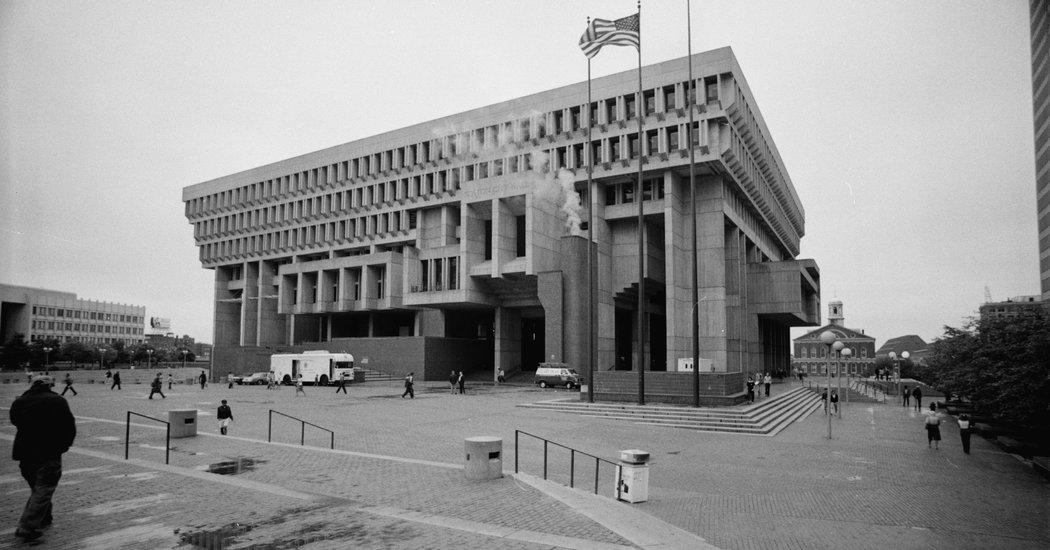 This obituary is part of a series about people who have died in the coronavirus pandemic. Read about others here.

Michael McKinnell, whose heroically sculptural and democratically open design for Boston City Hall catalyzed the city’s urban revival in the late 1960s and embodied the era’s idealism and civic activism, died on March 27 in Beverly, Mass. He was 84.

His wife and architectural partner, Stephanie Mallis, said the cause was the coronavirus.

In 1962, the British-born Mr. McKinnell was a 26-year-old graduate student in architecture at Columbia University working as a teaching assistant to the German-born architect Gerhard Kallmann when, almost on a lark, the two entered a competition to design a new Boston City Hall. Vying with 255 other submissions, they won.

“They were as amazed as anyone that they prevailed,” Ms. Mallis said. Neither had ever built anything.

Except for fellow architects, few Americans had seen anything quite like the winning proposal — certainly not the city’s mayor, John F. Collins, who reportedly exclaimed on first seeing the design, “What the [expletive] is that?”

It wasn’t the proper government structure of Boston’s staid red-brick tradition; rather, it was a proudly monumental building that would command the vast plaza of the new Government Center complex with thunderous authority.

What Mayor Collins saw was the exposed musculature of mighty concrete piers supporting a massive cornice line of offices. The building was to stand at the edge of a fanning plaza whose bricks entered the ground floor of the structure like a carpet, running up three flights to the City Council chambers.

Spaces and forms interpenetrated. Sculptural concrete projections that housed the chambers and the mayor’s office protruded from a modular facade of offices. A brick amphitheater of stairs on the ground floor accommodated gatherings of citizens, even spontaneous sit-ins; the vast plaza in front, inspired by the Campo of Siena, Italy, anticipated the thousands of protesters of those riotous times.

It was a benevolent structure that took the side of the people, guaranteeing citizens free access through porous perimeters in that cradle of American democracy.

Twenty years Mr. McKinnell’s senior, Mr. Kallmann was best known for publishing an essay about two divergent trends in architecture: one in which buildings were composed rigorously within a controlling grid; the other, propelled by French and British Brutalists, in which designs in concrete embraced sometimes violent breakout forms. The Kallmann-McKinnell design synthesized the two approaches, the rational and the complex.

Both men had been educated in British architecture schools that taught that architecture’s mission was to build well in the service of a moral and social purpose. And both had been imbued with the belief that concrete was, as one theorist said, “the stone of our time.”

Built in concrete and brick, their robust City Hall design implicitly critiqued the thin commercial glass-and-steel buildings then chilling cities across America. It was a statement of protest against what Mr. McKinnell called the “degenerate frippery and surface concerns” of “cosmetic” architecture.

Its deliberate monumentality expressed a generosity toward the public rather than a corporate idea of minimal expense, and its exposed concrete surfaces gave the building a sense of authenticity — an “all thoroughness,” Mr. McKinnell said in an interview, admitting that had they had their way, “we would have used concrete to make the light switches.”

Like the Sydney Opera House, the structure landed on postcards, the two men’s design becoming a symbol of the new Boston. And though it proved controversial with some members of the public, who found the rugged materials and bold forms confrontational, it was, for most architects and critics, the masterpiece that would hover over the rest of Mr. McKinnell’s nearly 60-year career.

The two architects quickly won a half-dozen commissions to design a series of buildings in and around Boston, all built in concrete. Both received appointments to the faculty of Harvard’s Graduate School of Design.

Their careers were inextricably linked. They even sat opposite each other at a partners desk, passing drawings back and forth as they conceptualized and developed projects.

Their emphasis on constructional rigor would earn Mr. Kallmann and Mr. McKinnell the sobriquet “Column and Mechanical” in one of their Harvard classes.

But by 1974, as concrete grew unpopular and a national recession took hold, Mr. McKinnell and Mr. Kallmann found themselves out of work, waiting for the phone to ring in a garret office on Tremont Street overlooking Boston Common. They thought of returning to England.

At the same time, the softer architectural blandishments of postmodernism, promising the comforts of architectural history and tradition, were challenging modernists.

In 1978, the second act for Kallmann McKinnell & Wood, as their firm was then called, arrived in the form of a commission for the American Academy of Arts and Sciences, to be built on a hill in residential Cambridge, Mass. Its directors told the architects, “Not one square inch of concrete, inside or out.”

The commission was for a house for academics, a grove of academia, and having learned the lesson of survival — that they should design not for an audience of architects but for clients and the public — Mr. Kallmann and Mr. McKinnell embarked in a new direction that would last the rest of their careers. Mr. Kallmann died in 2012.

They built the Academy with a sloping roof, like the houses around it, and they consulted history books to evoke the turn-of-the-20th-century architecture of Frank Lloyd Wright, the brothers Charles Sumner Greene and Henry Mather Greene, and others who used natural materials like wood and stone. For the Academy, City Hall’s arresting vertical lines were tranquilized into calming horizontals. And Mr. McKinnell relaxed the interiors, realizing that a space for artists, philosophers and historians needed to have “talking places” — nooks and crannies for informal conversation.

The critic Ada Louise Huxtable of The New York Times wrote approvingly of the project. “The architects have felt free to find their answers in terms of existing building types and historical precedents,” she wrote, “rather than through the invention of new forms. The design goes beyond modernism.”

But it was a period of style wars in architecture, and modernists believed Mr. McKinnell and Mr. Kallmann had stepped onto a slippery architectural slope. Indeed, years of postmodernist buildings followed in their portfolio, designs that indulged historicism and traditions less probingly than in the Academy building.

“Yes, it was possible to have the rigor and systematic nature of modernism together with some symbolic and representational elements,” Andrea Leers, a friend and teaching colleague of Mr. McKinnell’s, said in an interview. “But to most of us, it was a kind of capitulation.”

If the firm lost the attention of modernists, it gained the support of a larger audience, and Kallmann McKinnell & Wood went on to add scores of employees and to attract commissions to design embassies, academic buildings and museums around the world.

Noel Michael McKinnell was born on Dec. 25, 1935, in Salford, Manchester, England, to Ronald and Marguerite McKinnell. His father was an accountant who had fought in both world wars; his mother was a homemaker.

Mr. McKinnell’s marriage to Jane D’Espo in 1961 ended in divorce. Besides Ms. Mallis, whom he married in 2003, he is survived by two daughters from his first marriage, Caitlin McKinnell and Phoebe McKinnell; a sister, Sheila Sharman; and four grandchildren.

After Mr. McKinnell left his firm several years ago and moved to Rockport, Mass., he and Ms. Mallis continued to design buildings, completing institutional projects in Israel. They also both painted.

He remained the dedicated architect and builder even on his deathbed. After he refused life support in the hospital in Beverly, he spoke by telephone with his wife, herself isolated at home because of the coronavirus. He described to her the design for a grave site, to be created in their backyard garden in Rockport overlooking the sea. It would be a simple square of white roses, his favorite flower, planted in a lower terrace on an axis with another flower bed on the upper one.

As he described it, she drew the design. The gravestone itself, carved with both their names, would be granite, not concrete.