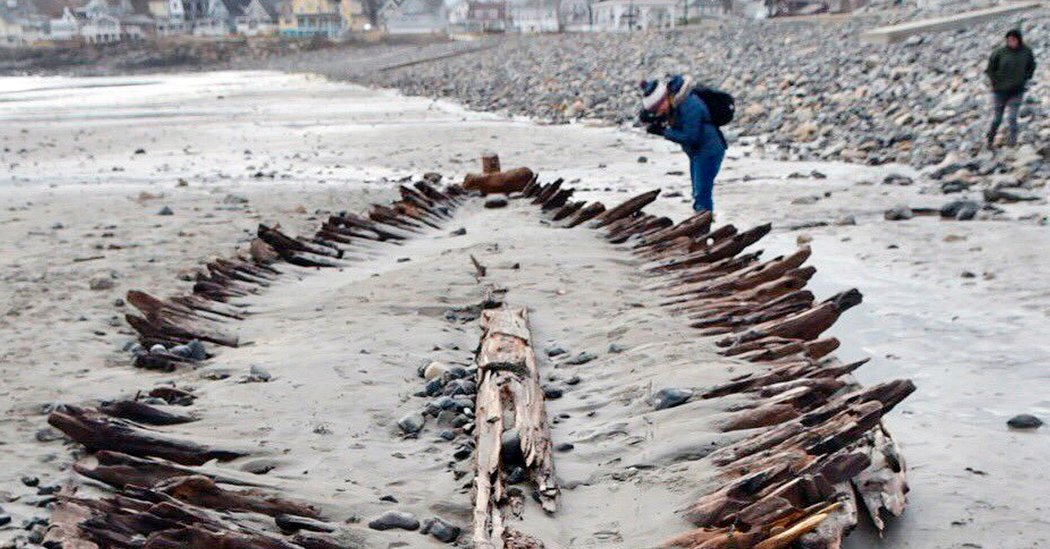 In 1769, a cargo ship laden with flour, pork and English goods set sail from Salem, Mass., headed to Portland, Maine.

The ship encountered a fierce storm and never made it to its destination. Now a maritime archaeologist believes he may have solved the mystery.

Every few years, the remains of a shipwreck have surfaced on a beach in York, Maine. Its wooden hull, which is about 50 feet long, appeared in 1958 after a storm, and again in 1978, 2007 and 2013, capturing the interest of local residents and visitors to Short Sands Beach. The last time waves exposed its frame was in March 2018.

The Maine Historic Preservation Commission has said it believes the wreckage dates from the period between the Revolutionary and Civil Wars. But the history and identity of the ship remained uncertain in York, a small resort town 45 miles south of Portland.

Relying on historical records, archaeological work and wood samples from the ship, Stefan Claesson, the maritime researcher, told York town officials last month that he believed the remains most likely were from the Defiance, a sloop that was built in Massachusetts in 1754. Sloops were single-mast vessels used for transporting cargo.

“This is one of a very few examples of a pre-Revolutionary War or Colonial-built ship from New England,” said Mr. Claesson, the owner of the aerial drone and archaeological surveying company in New Hampshire. “There is still a lot to learn about how exactly these ships were designed and built — ships that were the lifeline for early settlements, and were the main vehicles of trade and commerce in New England and the U.S.”

Mr. Claesson, who grew up in Maine and spent his summers and early years in York, said he first became interested in the wreckage after a storm in 2007.

“Like most everyone, I was completely unaware of the wreck under the beach until it was revealed by that Patriots’ Day storm in 2007,” he said.

The wreckage typically lies between 4 and 6 feet below the sand. About a month after it is exposed, it gets covered up naturally, but the town also trucks in sand to help the beach recover, he said.

In 2018, after waves revealed the wreckage again, Mr. Claesson took wood samples from the hull plank and ship frame. The samples were tested at the Cornell University Tree-Ring Laboratory in Ithaca, N.Y., to determine their age.

The analysis suggested that the trees that were felled had a ring date of about 1753.

“Of interest in this particular study was that three different species were used, two that are not commonly used in shipbuilding, that grow right here in New England and northeastern North America,” Carol B. Griggs, a senior research associate at the Tree-Ring Laboratory, said on Sunday.

Whether the ship is the Defiance or another vessel, it was built in 1753 or soon after, and most likely somewhere along the New England coast, she said.

After combing through historical and notary records, including a firsthand account he found at the Phillips Library at the Peabody Essex Museum in Rowley, Mass., Mr. Claesson learned that there was a sloop called the Defiance that had been wrecked in York in 1769.

He also found that a sloop with the same name “was coincidentally built in 1754 in Massachusetts, which fits well with out tree-ring dates of circa 1753,” he said.

Mr. Claesson said his research found that the Defiance was traveling from Salem and headed for Portland when it encountered a storm.

“They took anchor, but in heavy seas the crew was forced to cut the anchor cables, and were pushed ashore onto York Beach,” Mr. Claesson said. “The ship was a total loss, but the crew survived.”

Over the years, storm waves have occasionally uncovered the shipwreck. The weathered ruins have intrigued residents and visitors who come to marvel at the site and take photos.

“It is a local oddity,” said Elizabeth D. Blanchard, a member of the York Board of Selectmen. She has seen the wreckage about three times. “It doesn’t appear very often,” she said. “It’s kind of neat.”

In 2018, York’s Police Department posted photos of the wreckage on Facebook, drawing more than 2,000 shares and national headlines.

Because of the attention at the time, town officials temporarily placed police tape around the ruins after reports that people were taking pieces of it, The Portland Press Herald reported.

Mr. Claesson said he has presented his research to the York board and the Ellis Park Committee, which manages the beach. He said he hoped town officials could protect the wreckage.

“Minimally, I hope there will be a local stewardship team assembled to keep an eye on the site during storm season, protect the site from looters, and inform visitors how to interact responsibly with the site when it is exposed,” he said.

But Mr. Claesson added that there must be more archaeological research to confirm that the wreck is indeed the Defiance.

“It would be great to have a chance to conduct a more detailed archaeological investigation to understand how the ship was designed and built, and confirm the identification as Defiance,” he said. “We may not have too many more opportunities to document marine architecture of this vintage, and tell the story of these early American seafarers.”