Nearly one million people applied for an emergency income support benefit on the first day the program opened. The program aims to help people who lost pay due to the global pandemic. (Francis Ferland/CBC)

Nearly one million Canadians filed for income support benefits on the first day the emergency COVID-19 program was open for applications.

Employment Minister Carla Qualtrough’s office says 996,000 new claims were filed for the Canada emergency response benefit (CERB) on Monday, which offers people about $2,000 a month for up to 16 weeks.

Since March 15, the federal government has received more than four million claims, including employment insurance (EI) claims that will be paid out as the CERB for the first four months before EI payments kick in.

More than three million applications have been processed to date.

In his daily briefing this morning, Prime Minister Justin Trudeau expressed appreciation for the public servants processing those claims, noting that they are working around the clock to get Canadians the help they need as quickly as possible.

Despite the high numbers, Trudeau acknowledged Monday that some people who should qualify for the aid aren’t eligible under current rules.

He promised that changes will be announced in the coming days to include students and people such as gig workers, contractors and volunteer firefighters who work 10 hours or fewer per week.

He also said there would be support for those who continue to work but are making less than they would through CERB, such as home care workers or people caring for vulnerable seniors in long-term care facilities.

“You need support now, and work is underway to get it to you as soon as possible,” he said.

“For people in all of these situations, we see you, we’re going to be there for you, and we’re working as hard as we can to get you the support you need.”

He recommended several amendments to capture more people in the CERB eligibility rules, including students and low-income Canadians.

Singh also urged the government to deliver “courage pay” to ensure essential workers make at least $15 an hour, along with a 20 per cent top-up for danger pay.

“The consequences of having a program that excludes the most vulnerable are as tragic as they are human,” Singh wrote in the letter.

The government is asking people to apply for CERB on days of the week according to birth month in order to avoid overloading the system managed by the Canada Revenue Agency. 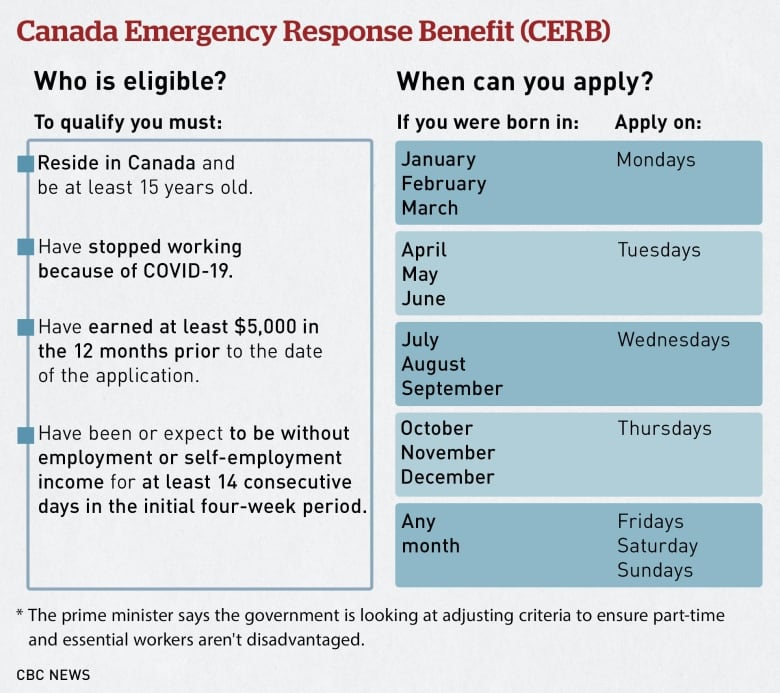 On Monday, people born January through March were to apply. Today, it’s people born April through June. Tomorrow, people born July through September should apply, while Thursday is application day for those born between October and December.

The government also is offering a 75 per cent wage subsidy program to help businesses keep people on the payroll. Under that program, businesses qualify if they have seen a 30 per cent decline in revenue compared to the same month last year.

All businesses, charities and non-profits are eligible for the subsidy. Parliament is expected to be recalled in coming days to pass legislation to enable the program, which is expected to cost $71 billion.

“I know House leaders will be speaking throughout the day to reach an agreement for the House of Commons to quickly pass this legislation, which will give much needed financial support to Canadian workers while helping employers to keep their staff on the payroll,” he said.

“A lot of work has been done since we announced our plan to subsidize wages. We continue to rely on your input and feedback as we refine it, and we’ll have more details to share very soon.”