New SEC gets down to work in Andhra Pradesh 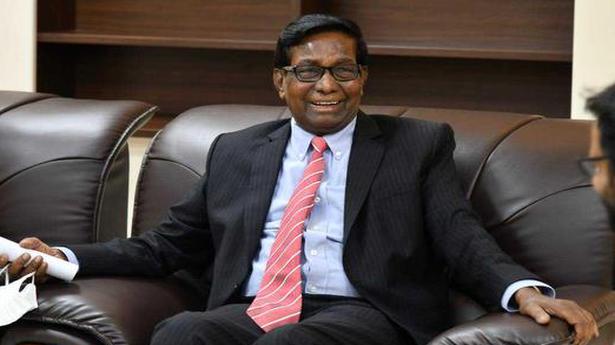 The new State Election Commissioner (SEC), Justice (Retd.) V. Kanagaraj, who assumed office on Saturday morning, said the COVID-19 lockdown period gave him time to do some groundwork and take charge of the situation.

With bundles of books and reports with him to go through, Mr. Kanagaraj said he was already on the job.

He, however, hinted at taking a call on the local body elections once the severity of the pandemic reduced.

Speaking to The Hindu, Mr. Kanagaraj dubbed the situation as an extraordinary one, which needed to be handled differently.

He dedicated his first day of work indoors to evaluate some key documents pertaining to the elections.

“The whole world is worried about the pandemic, and humanitarian considerations take precedence over other issues. Meanwhile, I’ve got some key documents and books related to the State polls. Got into my job and going through them for now. Taking advantage of the current holidays for indoor work,” Mr. Kanagaraj said.

Responding to the divergent opinions over his appointment, he said, “It is 100% constitutional and has come through an ordinance post a decision by the State Cabinet.”

“Constitution decries class legislation, but not a reasonable classification. If anyone has any objection, they can challenge the Act, but not the execution part of it. Ultimately, it’s people’s will that triumphs over. Post Independence, some of the British officials and the Nizam of Hyderabad wanted to take refuge in the United Nations, but the law of the free India prevailed over,” he added.

The State government had earlier reduced the tenure of the former SEC, N. Ramesh Kumar, from five years to three, resulting in his automatic termination.

Mr. Kanagaraj had served as Judge of the Madras High Court for nine years and had several landmark judgments to his credit, particularly in cases related to the education sector and women and children safety.

He had graduated from the Madras Law College in 1972 and started practising as member of the Salem Bar Association in 1973. He had the distinction of sitting in the Madurai Bench of the Madras High Court, which was the only Bench created after 57 years of Independence, on its inaugural day.

Since his retirement from the Madras High Court, Mr. Kanagaraj resumed legal practice in the Supreme Court, where he had been a designated senior advocate.