An NHS nurse has confronted a group of young men who were drinking beer in a park and ignoring the government’s plea to stay at home.

Louise Ann, a mother of two from Basingstoke, was told to “f*** off” by the group, who were lounging around in the sunshine surrounded by their bikes – going against the current lockdown rules due to the coronavirus pandemic.

Filming the encounter, she told them: “My husband is not getting paid. I have to go in and do overtime, all the time. I’ve got two kids in there.” Image: The nurse was told to ‘f*** off’ after telling the men to go home

As some of the men began to stand up and move away, one of them replied: “Well don’t stand near us then, innit?”

One of them sniggered after she said: “I have to go to work every day fearing I’m going to bring it home to my family because of people like you.

“You are absolute idiots.”

After being told to stop recording, the nurse added: “No! If you’re going to be stupid, then I’ll show the world how stupid you are.

“Absolute idiots. Why do you think you’re better than anyone else? I’ve got no idea.” 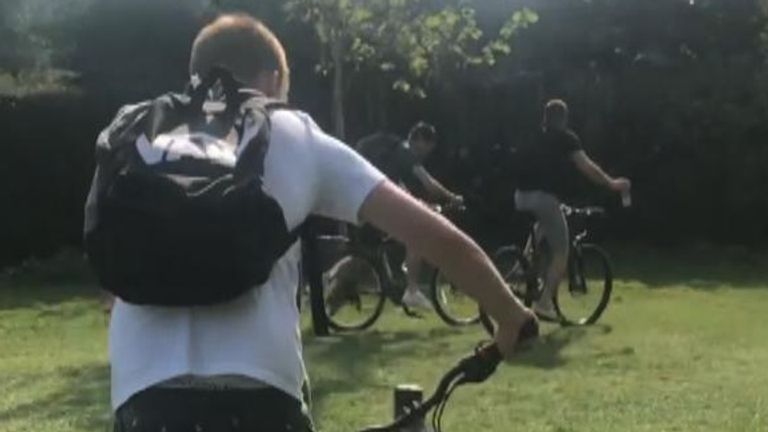 Image: After being confronted, one of the men said: ‘Don’t stand near us then, innit?’

Uploading the video to Facebook – where it has been shared thousands of times – Louise said she hated confrontation but had to act because she was “so cross”.

The weather has been warm for many of us over the Easter weekend, but Britons are being urged to follow government advice and avoid visits to beaches and parks. 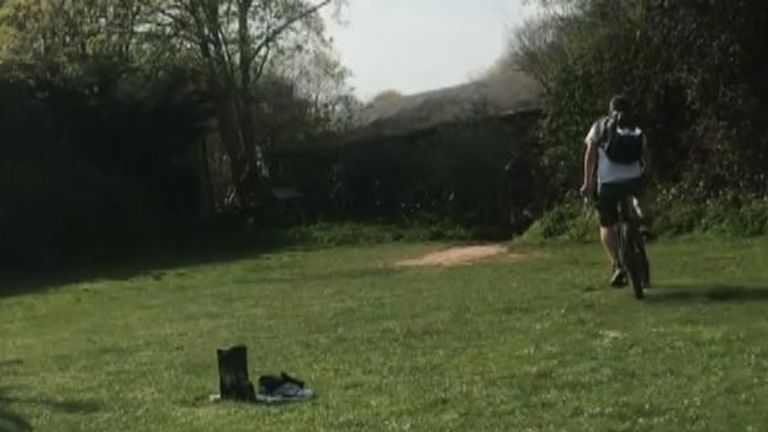 Image: The men eventually cycled off after being confronted by Louise

Police officers from 37 forces in England and Wales issued more than 1,000 fines in the run-up to Thursday, for people breaching COVID-19 regulations.

But despite some high-profile reports of people breaking the lockdown restrictions in recent days, the vast majority of Britons appear to be adhering to the rules. Image: What a difference a year makes: Scarborough during the 2019 Easter bank holiday weekend versus yesterday

The Met Office has said temperatures could exceed 24C (75.2F) on Easter Sunday, with the best weather forecast in the South.

Several parks have introduced new measures to deter people from sunbathing and gathering inside.

On Friday, Health Secretary Matt Hancock said: “This Easter will be another test of the nation’s resolve. It’s a time of year when people normally come together.

“But however warm the weather, however tempting your local beach or park, we need everyone to stay at home.”

On Saturday, the UK recorded 917 new coronavirus deaths, including an 11-year-old.

This brings the total number of UK deaths to 9,875.