OPEC and Russia are said to reach a deal to temporarily trim oil output.

The Organization of the Petroleum Exporting Countries and other countries including Russia reached a tentative agreement on Thursday to temporarily cut large volumes of production, according to a person with knowledge of the matter.

OPEC and the other oil-producing countries agreed to cut about 10 million barrels a day, or about 10 percent from normal production levels, in May and June, said this person, who spoke on condition of anonymity because the announcement had not been made official.

Possible further trims could come from a meeting of the Group of 20 nations on Friday.

Negotiations hit a snag late Thursday over Mexico’s reluctance to cut its share of oil, reportedly 400,000 barrels a day, leaving the deal in limbo.

Even before that happened, oil prices fell because analysts and traders had hoped for a bigger reduction to prevent the buildup of a glut of oil. On Thursday afternoon, the West Texas Intermediate crude future contract, the American benchmark, was down more than 7 percent to $23.28 a barrel.

Amrita Sen, chief oil analyst at Energy Aspects, a research firm, said markets would not be impressed by the deal.

In addition, the new cuts won’t begin until May, allowing oil supplies to increase. There are also doubts about whether some of the countries party to the cuts, like Iraq, which often produces whatever it can, will really observe them. Ms. Sen said that OPEC and its collaborators were largely doing what they would be forced to do anyway.

Still, the meeting appears to be at least a start at tackling the most serious problem the oil industry and OPEC countries have encountered in decades. The decision to cut might go some way toward assuaging growing tensions between members of the cartel and the United States.

Bank of America traders feel pressure to go into the office.

Traders and other employees of Bank of America have felt pressure to continue showing up at the office even though some employees at the firm’s Midtown Manhattan headquarters have caught the coronavirus, according to nine current employees and six former employees with knowledge of conditions there.

The situation is forcing some to make a painful choice: report to the office and risk infecting themselves and their loved ones, or remain home and risk the loss of a job or income.

The bank’s communications about the number and location of sick employees have been scant, say employees, leaving many worried that they may have unwittingly spent time near a virus patient. The lack of information has also created an atmosphere of paranoia, whispers and gossip, employees say.

The bank would not say how many people had fallen sick. “We’ve got a critical role to play to help keep the economy moving forward,” said Jessica Oppenheim, a spokeswoman for Bank of America, in a statement. “That’s our assignment. At the same time we are sparing no expense or consideration taking care of our people.”

She added that 95 percent of trading-business employees now work from home.

Small businesses wait for cash as a disaster loan program freezes up.

Flooded by requests for help, a federal disaster loan program that was supposed to deliver emergency relief to small businesses has run low on funding and nearly frozen up entirely. Now, business owners who applied are desperate for cash and answers about what aid, if any, they are going to receive.

The initiative, known as the Economic Injury Disaster Loan program, is an expansion of an emergency system run by the Small Business Administration that has for years helped companies after natural disasters. To speed along billions in aid, the government directly funds the loans, sparing applicants the step of finding a lender willing to work with them.

But in the face of the pandemic, the loan program is drowning in requests. Many applicants have waited weeks for approval, with little to no information about where they stand, and others are being told they’ll get a fraction of what they expected.

The program is supposed to offer loans of up to $2 million, but many recent applicants said the S.B.A. help line had told them that loans would be capped at $15,000 per borrower. That was backed up by a message from the agency that one applicant shared with The New York Times.

S.B.A. officials did not respond to repeated requests for comment.

“I’m afraid I won’t see a penny,” said Virginia Warnken Kelsey, an opera singer in Branford, Conn., who applied on March 29 and had not received a response as of Thursday.

Fed programs could pump $2.3 trillion into the economy.

The Federal Reserve on Thursday announced an expansive effort to help companies and state and local governments gain access to funding, ramping up its already extensive efforts to protect the economy and financial markets from the impact of a severe downturn.

The central bank said it could pump $2.3 trillion into the economy through the new and expanded programs. It rolled out the relief package just as the government announced that 6.6 million more Americans were newly jobless, laying bare the severe damage to the economy from the coronavirus pandemic.

About 16 million people have filed for unemployment in the past three weeks. Also on Thursday, a reading of consumer confidence plummeted to its lowest level since 2011, potentially forecasting a pullback in spending that could lead to a further cascade of business closings and layoffs.

The Fed’s new program makes use of funds recently authorized by Congress to buy municipal bonds and expand corporate bond-buying programs to include some lower-rated and riskier debt. Doing so will keep credit flowing through the economy, including to companies and state and local governments that might otherwise struggle to get access to it.

“They understand the gravity of the situation,” said Julia Coronado, founder of MacroPolicy Perspectives, an economic consultancy. “This recession is not going to be a joke, and the Fed gets that.”

The markets that local governments use to issue bonds and finance themselves have been in turmoil, which threatened to make it difficult for officials to fund their governments just as sales tax and other revenues dried up and the need for cash skyrocketed. 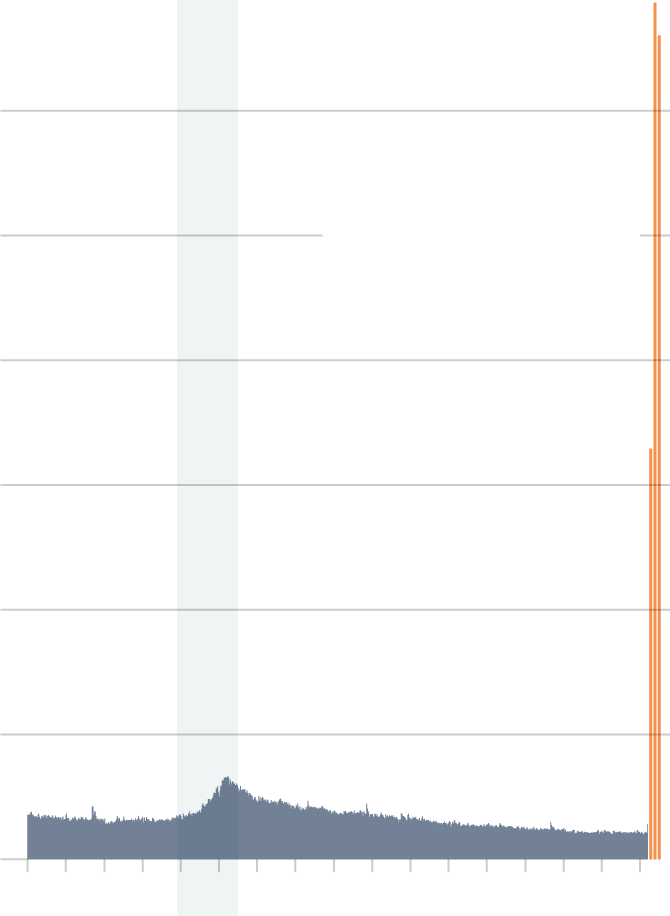 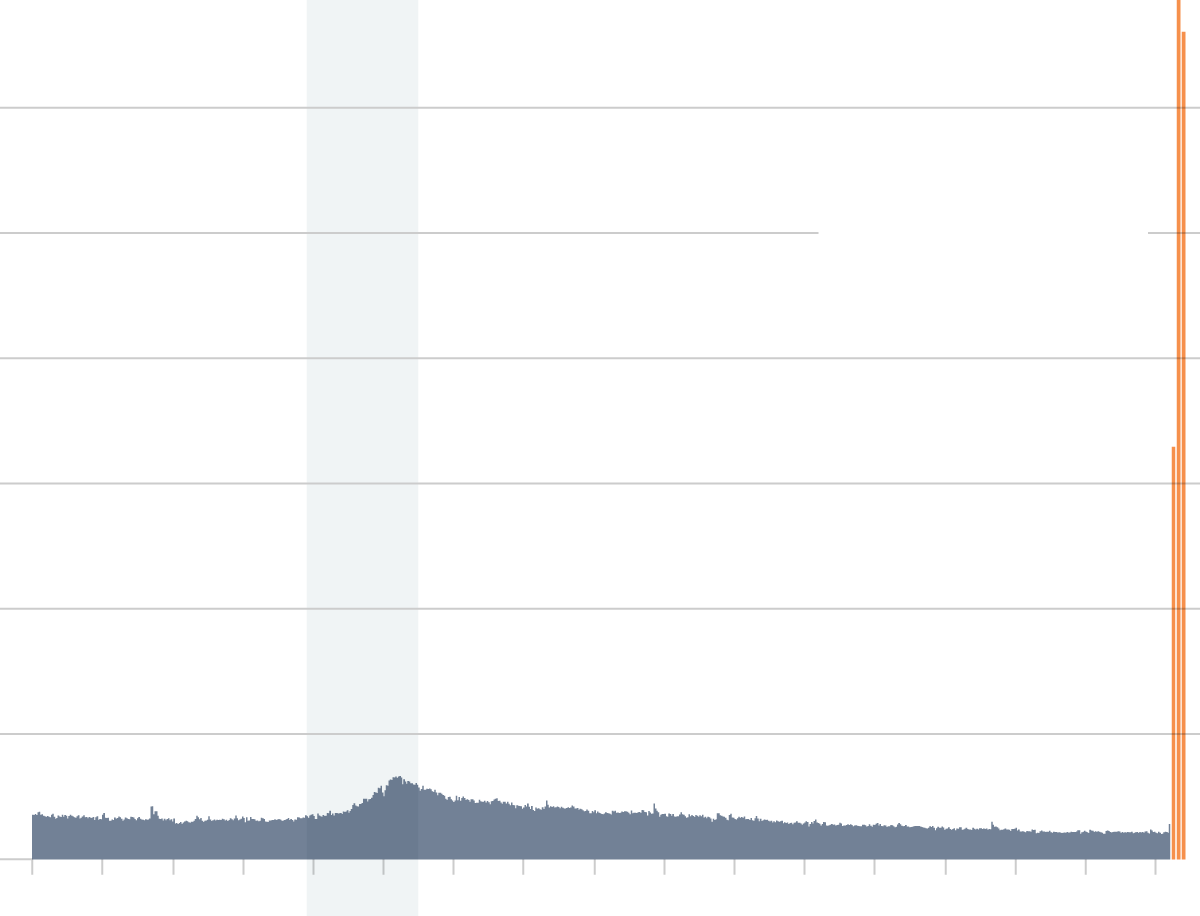 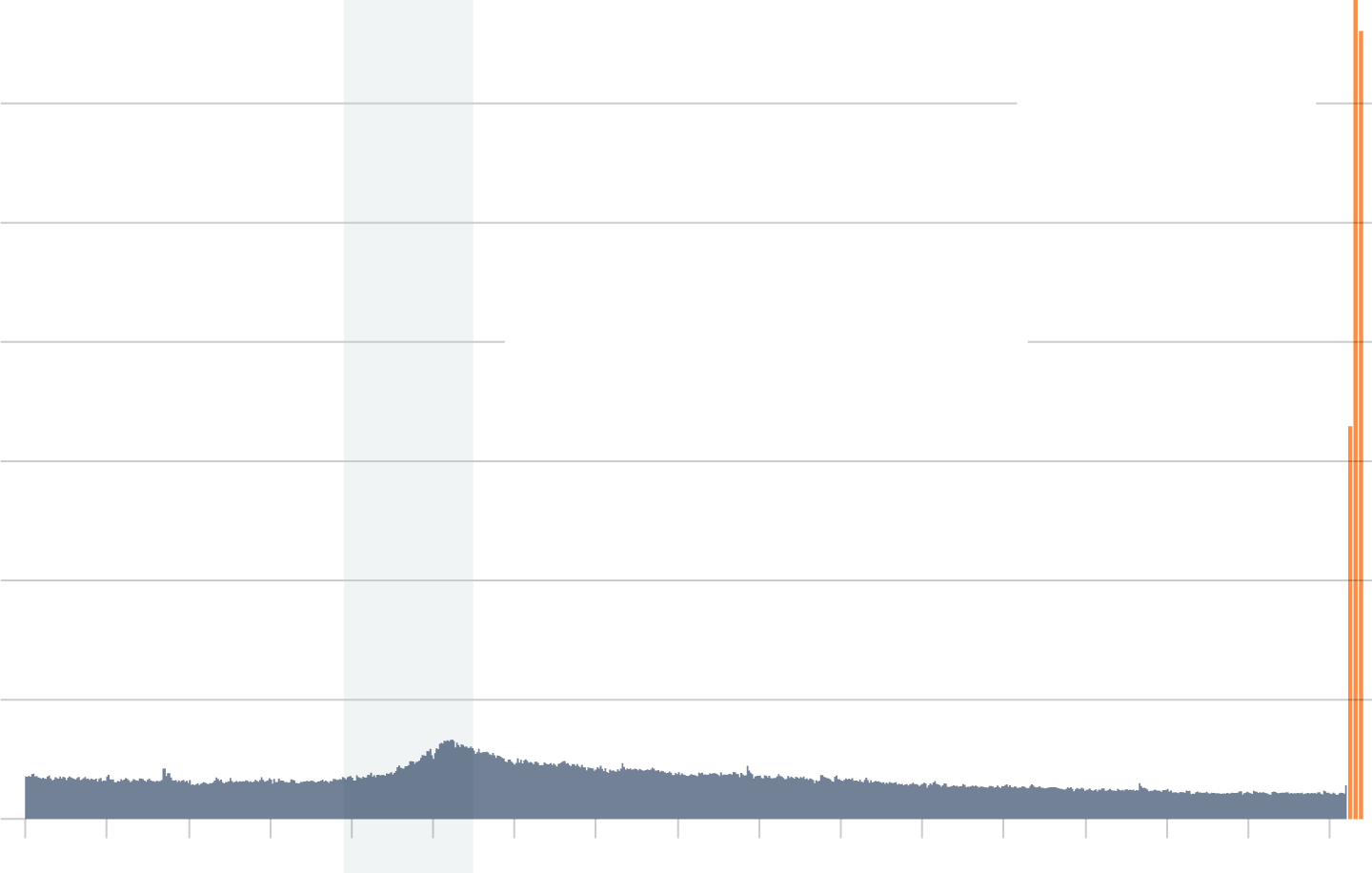 Another 6.6 million people filed for unemployment benefits last week as the coronavirus outbreak continued its devastating march through the American economy, the Labor Department reported on Thursday.

The release came as the Federal Reserve said it could pump $2.3 trillion into the economy through new and expanded programs it announced on Monday, ramping up efforts to help companies and state and local governments suffering financially amid the coronavirus outbreak.

With astonishing swiftness, the pandemic has shut down both longstanding and new businesses, leaving veteran workers and recent hires in nearly every type of industry without a paycheck. In just three weeks, more than 16 million Americans have lost their jobs — more losses than the most recent recession produced over two years.

It’s as if “the economy as a whole has fallen into some sudden black hole,” said Kathy Bostjancic, chief U.S. financial economist at Oxford Economics. Many Wall Street analysts concede that at this point, forecasts are not much more than gussied-up guesses: The purposeful and sudden halt in economic activity has no precedent, and no one knows when the restrictions on movement and commerce will be lifted.

Given the current information, though, several economists expect that by the end of the month more than 20 million people will have been thrown out of work, pushing the unemployment rate toward 15 percent. In February, it was 3.5 percent, a result of 113 straight months of job growth.

Stocks rose on Thursday after the Federal Reserve announced an expansion of its emergency lending powers in another bid to backstop the U.S. economy, but the gains faded in the afternoon after oil prices fell and shares of energy companies followed.

Still, the S&P 500 rose about 1.5 percent, bringing its gains this week to 12 percent. Markets in the U.S. are closed on Friday, ahead of Easter.

But investors largely shrugged off the bad news, as they had on several occasions recently. As economically damaging as the pandemic will be, Wall Street is starting to see a path forward that was not clear a few weeks ago. Slowing infection rates, hefty government relief packages and the Federal Reserve’s efforts to calm the markets have helped eased investors’ minds.

Shares of companies that have been hardest hit by the outbreak rallied. Retailers Gap, Nordstrom and Kohls all rose more than 10 percent, while United Airlines gained more than 14 percent.

On the flip side, energy stocks weighed on the S&P 500 as crude oil futures fell. Schlumberger dropped about 4 percent and Halliburton fell about 6 percent.

Rich countries push poor ones aside in the scramble for coronavirus gear.

As the United States and Europe compete to acquire scarce medical equipment to combat the spread of the coronavirus, poorer nations are losing out to wealthier ones in the global scrum for masks and testing materials.

As wealthier nations face accusations of “modern piracy” for trying to secure medical supplies for their own people, manufacturers say orders for vital testing kits cannot be filled in Africa and Latin America because almost everything they produce is going to the United States or Europe. UNICEF says it is trying to buy 240 million masks to help 100 countries, but has so far only managed to source around 28 million.

“There is a war going on behind the scenes, and we’re most worried about poorer countries losing out,” said Dr. Catharina Boehme, the chief executive of Foundation for Innovative New Diagnostics, which collaborates with the World Health Organization in helping poorer countries gain access to medical tests.

The supply divide matters in part because testing is the first defense against the virus, and an important tool to stop so many patients from ending up in hospital.

Phone calls are making a comeback. The nation’s biggest telecommunications companies were prepared for a huge shift toward more internet use from home, but did not expect the return of plain old voice calls.

Verizon is now handling an average of 800 million wireless calls a day during the week, more than double the number made on Mother’s Day, one of the busiest call days of the year. Verizon added that the length of voice calls was up 33 percent from an average day before the outbreak. AT&T said that the number of cellular calls had risen 35 percent and that Wi-Fi-based calls had nearly doubled from averages in normal times.

In contrast, internet traffic is up only 20 percent to 25 percent from typical daily patterns, AT&T and Verizon said.

Catch up: Here’s what else is happening.