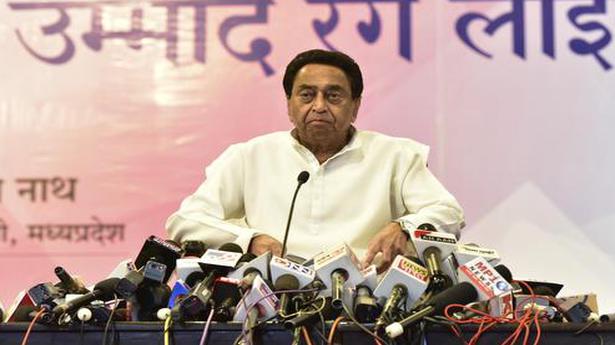 Former Madhya Pradesh Chief Minister Kamal Nath on Sunday said Parliament was allowed to function during the COVID-19 outbreak to ensure that the State Assembly could function too.

Asked if Parliament was allowed to run to ensure the State government could be toppled, Mr. Nath told reporters via a videoconference Parliament functioned even when all countries were expressing concern over the outbreak and the Odisha and the Chhattisgarh Assemblies were adjourned.

“Our Assembly Speaker in his wisdom had adjourned the session to March 26 in view of the lockdown but he was mocked at,” he said.

The former Congress government had initiated a lockdown by shutting malls and colleges from March 12 itself. “The Centre didn’t take any action as they were waiting to topple the government.”

Madhya Pradesh, he said, was perhaps the only State in the world at present which didn’t have a Health or a Home Minister.

Alleging that the health infrastructure is crumbling, he said 90% of the positive patients were being treated in private hospitals. Doctors at the government hospitals including the AIIMS in Bhopal were mainly functioning with paramedics as the former were refusing to attend to patients in the absence of personal protection equipment (PPEs).

“Most of the figures are emerging from urban areas. The more you test, the more number of positives there will be and vice versa,” he said.

The former Chief Minister, who had also been a Union Commerce Minister, said the country had been hit by an economic crisis and with the Centre’s revenues and collections from the GST falling, India may well have to approach the International Monetary Fund.

“I see a situation where India may have to go back to the IMF as we did it in 1980. When we took an IMF loan at that time there were such conflicting views.”

Talking about an economic package, Mr .Nath said the government should have a calibrated plan to restart targeted sectors of the economy with a focused package.