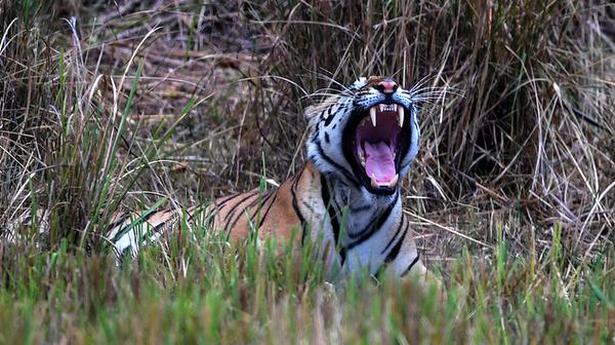 The spectre of COVID-19 has made its appearance in one of India’s most storied tiger reserves. The death of a 10-year-old ailing male tiger, in the Pench Tiger Reserve (PTR) — the country’s most munificent reserve —that succumbed to a ‘respiratory illness’ last Saturday would have been a routine affair.

But a report of a confirmed COVID-19 infection in a tiger at the Bronx Zoo, in New York, United States and advisories by divisions of the Environment Ministry that deal with the protection of the cats in zoos, as well as in Tiger Reserves has officials in the National Tiger Conservation Authority (NTCA)— the organisation that manages the protection of India’s 3,000-odd tigers — puzzling on whether the tiger should be tested for the novel coronavirus disease.

The people who handled the dead tiger and were involved in its post-mortem would be tested for the infection, PTR Field Director, Vikram Singh Parihar told The Hindu. The viscera samples collected as part of the standard protocol have been preserved and will be sent to the veterinary research college in Jabalpur as well as the Indian Veterinary Research Institute, Bareilly, Uttar Pradesh. “The animal came to the pond frequently for water possibly because it was running a high fever. We gave him antibiotics on Friday but that didn’t show much improvement. Finally, it died on Saturday morning. We still don’t have a confirmed cause of death,” he said.

Swabs from the throat and nose to test for rhinotracheitis, a viral infection that afflicts cats and causes respiratory illness were collected, an official at the NTCA, Delhi said. However, it was unlikely to be enough to test for COVID and given the remoteness of the forests and lockdown in effect, would likely degrade and be unsuitable for testing.

Officials said they had implemented measures to keep a watch out for COVID among tigers. On Monday, both the Central Zoo Authority (CZA) and the NTCA issued guidelines that require zoos to be on the “highest alert” and monitor animals on closed-circuit cameras 24/7 for “abnormal behaviour and symptoms.”

Nadia, the COVID-positive tiger in the Bronx Zoo is believed to have been infected by an asymptomatic zookeeper. The CZA has also directed zookeepers to approach sick animals wearing personal protective equipment and isolate and quarantine them. “Mammals such as carnivores especially cat, ferret and primates to be carefully monitored and fortnightly samples of suspect cases to be sent to designated animal health institutes to initiate COVID-19 testing,” the circular noted.

The directive to Wildlife Wardens in States and reserves adds that tigers ought to be observed for symptoms consistent with COVID-19 such as respiratory signs of nasal discharge, coughing and laboured breathing and that personnel handling tigers have to be ascertained negative.