Policewoman bitten on the arm while explaining COVID-19 lockdown rules

A man has been charged by police after a female officer was bitten on the arm as she tried to explain the rules surrounding the coronavirus lockdown.

Greater Manchester Police (GMP) released photos of the injury suffered by the 21-year-old PC after she was called to reports of a man causing a disturbance in Rochdale.

Officers tried to explain to the man that he should not be going to other people’s homes following the government’s guidelines to tackle the COVID-19 pandemic, the force said. 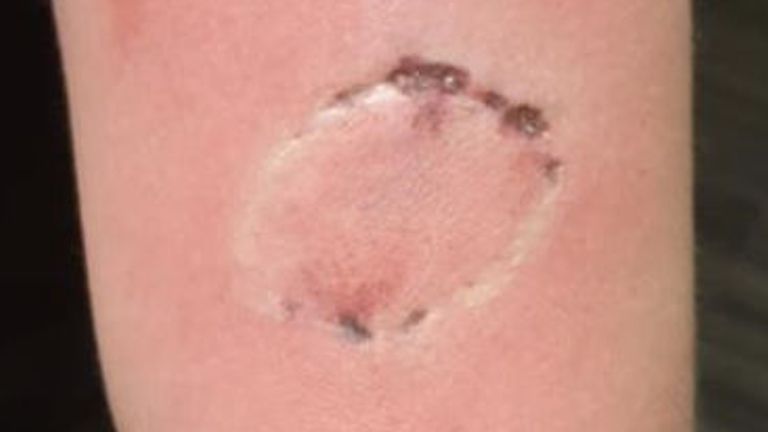 Image: The 21-year-old policewoman was left with a bite mark on her arm. Pic: GMP

While trying to engage with the man, two officers were punched and the 21-year-old officer was then seriously bitten.

She attended hospital following the incident on Thursday evening before being discharged to recover at home.

Days earlier she had been delivering Easter eggs to children while out on patrol, GMP said.

Christopher Hill, 29, of no fixed abode, has been charged with two counts of assault by beating of an emergency worker and one count of criminal damage.

He is due to appear at Manchester Magistrates Court on Saturday.

GMP Chief Constable Ian Hopkins described the attack on the officer during the coronavirus pandemic as “just the lowest of the low”, writing on Twitter: “Words fail me when it comes to some people’s behaviour.”

The message was retweeted by Home Secretary Priti Patel.

Superintendent Richard Hunt said he recognised the pictures of the officer’s bite injury were “quite graphic” but he hoped they helped people “understand the vicious nature of this attack”.

“This is a particularly challenging time for everybody at the moment, made worse by something so mindless like this,” he added.

“Having spoken to the officer earlier this morning, she said that [Thursday] night’s incident was a stark contrast to the support she has felt over the past few days, whilst she has been delivering Easter eggs to local children whilst out on patrol.

“This just goes to show that thankfully, incidents like this are not a reflection of the vast majority of the public, who are showing great support to us.”