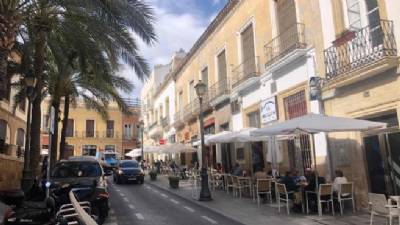 RESTAURANTS and bars in Almería city and province are staying in daily contact with their regulars and offering them home deliveries – a strategy that is proving successful and allowing them to stay ‘open’ during the national lockdown.

Although they cannot trade on their physical premises or allow customers in, eateries and bars continue to cook up a ‘dish of the day’ and drop it round to punters who phone in or contact them via social media.

David Giménez of Restaurante Entrevinos in Almería says he creates a ‘lightweight menu’ with dishes made from produce that is ‘not too difficult to find’ at a time when only supermarkets and other food shops are allowed to open.

They include casseroles, stews, sausages, and steaks, and sometimes, Giménez says, customers will buy the cuts of meat off them directly, raw, so they can cook it themselves at home.

El Rincón de Basi, also in Almería city, says it was already offering home deliveries before national quarantine started, but that now it is attempting to engage more with its clientèle via social media.

This includes creating a competition on Facebook offering a free home-delivered meal to the winner.

Discount vouchers have been created to encourage people to stay with them even while they cannot go there in person – Taberna Nuestra Tierra, an inn based in the city, has launched a series of ‘money off’ coupons via its campaign #SaveTheBares.

“The idea is that you can buy now, and come in and eat when we’re open again,” says manager Moisés Ferrón.

He says it offers regular customers an ‘incentive’ whilst helping the business retain ‘a bit of cashflow’ to deal with bills it has to pay that cannot be postponed.

Interest in the scheme has spread to other bars in Almería’s historic quarters, along the C/ Jovellanos.

“I’m sure we’ll come up with even more ideas, because this one has been very widely accepted,” Ferrón explains.

Also, social scientists have found that the sense of enjoyment and reward when buying in advance is greater than when a person acquires and pays for something in the same move.

For example, ordering goods online or via catalogues, which involves payment upfront, creates a sense of anticipation, and receiving them at a later date activates the same reward system in the brain as when opening a birthday or Christmas present.

Buying something and taking it home in the same act feels less rewarding, studies show, because of factors that include a nagging guilt at spending money, impulse buys that spark regret afterwards, and a sense of having to make a sacrifice to acquire something.

But the time lapse between paying for an item and actually receiving it means the initial ‘sacrifice’ feels less ‘current’ by the time the item arrives, making it seem more rewarding.

Plus, impulse-buying is less likely to occur, studies have found, when a person pays up front but does not immediately own the item.

Additionally, the restaurants’ ‘pay now, eat later’ scheme is focusing on the very human and instinctive feeling of hope – having something to look forward to ‘when this is all over’ makes it easier to bear in the meantime.

Although some restaurants and bars in the province of Almería say they have had to make temporary lay-offs, in full or in part, they are still working hard on ‘ticking over’ and, through their efforts to drum up future business for after the lockdown, know they are helping to secure those jobs again in a few weeks’ time when their staff are able to return.

The photograph shows Almería’s C/ Jovellanos, in the historic quarter, which is replete with pavement cafés and restaurants (taken by the city council).