A week after most of the country went into a strict partial lockdown, Russia reported 954 new Covid-19 infections on Monday. A sharp increase on the previous days tally and a sign the fight against coronavirus is intensifying.

The total number of cases nationwide now stands at 6,343, with 47 dead. Over two-thirds (4,484) of known instances are concentrated in Moscow, Europe’s largest city and the country’s main transport hub.

However, there are worrying signs that Covid-19 is also spreading to more far-flung provinces, with infections now recorded in 80 of Russia’s 85 federal subjects. On Monday, the first death from the virus was recorded in Siberia, a 62-year-old man in the Irkutsk region.

Meanwhile, the remote northern Komi Republic announced 31 positive tests and Buryatia in eastern Siberia found eight. It followed confirmation on Sunday that the coronavirus had reached Kamchatka, an isolated peninsula which reaches as far east as New Zealand.

Russian federal television reported that half of Moscow’s hospitalised Covid-19 patients are under 45 years of age, contradicting the general assumption that younger people are less likely to feel its worst effects.

Furthermore, some of the deceased were far from pension age. “Among the dead there are also young people. One person is 39 and another is 34,” Anastasia Rakova, a deputy to Mayor Sergey Sobyanin, told the ‘Russia 24′ news channel. “A lot of people in the hospital are in serious condition, also at a young age.” Rakova added that all the under 45’s had some form of health problem before contracting the virus.

Sobyanin said on Sunday that Moscow is considered to be at the “highest risk” due to the high volume of international visitors that normally pass through the city. He claimed that the growing number of Covid-19 hospitalizations forced him to take stringent measures to stop the spread of the virus. 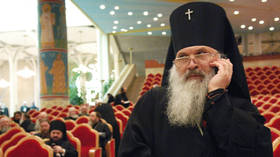 With that in mind, three regions – Irkutsk, Tomsk and Krasnoyarsk – will order all arrivals from Moscow (and Saint Petersburg) to self-isolate. Authorities in Chechnya went even further, by completely shutting its borders. Prime Minister Mikhail Mishustin described frontier closures as “unacceptable” and “excessive.”

News agency RIA Novosti reported that three priests have tested positive for coronavirus in the capital, where strict quarantine measures have been imposed with bans on all non-essential commerce and movement. Other cities around the country have introduced even harsher measures than Moscow. In southern Krasnodar, for instance, residents need a printed permit, obtainable only by essential workers, to travel beyond the area near their homes.

The present restrictions are so far scheduled to be lifted at the start of May, which is traditionally the time of Russia’s main annual holiday period, celebrating both International Worker’s Day and the WW2 victory over Nazi Germany.