As coronavirus attacks the respiratory systems of people all around the world, perhaps there will be one less thing destroying the lungs of Russians – cigarettes.

With the designation of tobacco as a non-essential product, half of the country’s production will grind to a halt. Before President Putin’s Thursday confirmation of an extended self-isolation period, experts suggested that any extension could lead to a shortage. Now, it’s very likely.

Despite Russia seeing a steep drop off in the volume of sales in the 2010s, the country is still the 4th largest cigarette market in the world. According to numbers from market research firm Euromonitor International, Russia sits only behind China, Indonesia, and the US. In 2015, the World Health Organization estimated that 59 percent of Russian males over the age of 15 smoke, although Rosstat figures suggest those numbers have fallen significantly since then, amid major public health campaigns in Russia. 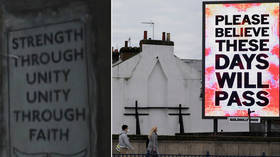 On Sunday, the Ministry of Industry and Trade excluded tobacco from the list of essential goods during the Covid-19 emergency. As a result, some of the industry’s most prominent players – Philip Morris, Japan Tobacco International, and British American Tobacco – have closed their plants since March 30. All three factories are located in St. Petersburg and the surrounding Leningrad Region, and each employ about 5,000 people.

According to Petrostat, the annual output of tobacco products in the region is around 180 billion rubles, and combined, they produce approximately 50 percent of all cigarettes consumed in Russia. Unsurprisingly, they have already appealed to the governor of Petersburg to add tobacco to the ‘essential goods’ list.

“According to the World Health Organization, there are about 36 million adult smokers in Russia,” Yana Guskova, the head of the external relations department at British American Tobacco Russia, said. “Cigarettes are goods that cannot be replaced. Stopping the production and sale of cigarettes will provoke a rush of demand and, despite the availability of stock, will lead to a shortage.”

Guskova believes that the suspension of the country’s cigarette industry could cost the government about 10 billion rubles a week in lost taxes, and asserted that the gap will immediately be filled with illegal products.

With ever-stricter quarantine measures, and restrictive rules on day-to-day life, stopping addicts from receiving their hit may lead to civil unrest. At least, that’s what Russian politician and former Federation Council Chairman Sergey Mironov thinks. The politician, who incidentally is not a smoker, said that the lack of cigarettes could lead to “tobacco riots.”

“I don’t smoke. I approve of reasonable restrictive measures… [but] what, now smokers will give up their habit? Naive hopes! We already have an epidemic, we don’t need tobacco riots too! And these decisions only provoke them,” Mironov told reporters.

According to Kommersant, the closure of factories may lead not only to a shortage of cigarettes in the country but completely change the market. The newspaper suggests that Philip Morris International, which has the best capacity to import cigarettes, will overtake the leader, Japan Tobacco International. The illegal market could also become completely altered – 38 percent of counterfeit cigarettes come from Belarus, and the border is now closed.