A sex worker has told Sky News how the pandemic has left her and many others without any income, as a hardship fund has helped more than 230 who are in crisis.

Lizzy, who has worked as a sex worker for 10 years in England, told Sky News she’s applied for benefits for the first time in her life after her line of work was hit first by the storms and flooding, and now by the coronavirus outbreak.

She told Sky News: “I’m ok at the moment because I have applied for universal credit for the first time ever. 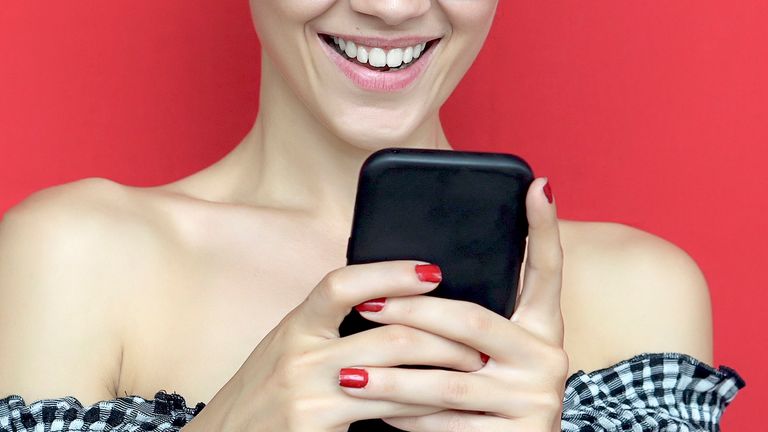 Image: Sex workers are having to try to reach clients remotely. File photo

“I did have some savings but they have been mainly used up in the last few months when it has been quiet. January and February is always very quiet for me which I had planned for but the storms made it practically dead, but then coronavirus started in March which is when I’d expect it to pick up again.”

She hasn’t seen any clients for the last few weeks, with many dropping off or herself choosing not to meet up.

She said: “I have had a couple of enquiries surprisingly but I’ve chosen not to work at the moment.”

Lizzy, who does most of her work in person, says even online or remote work has become difficult because people have lost their income or are at home with their families.

“I’ve done a bit of camming [working via a webcam] in the past so I was hoping to pick it up again,” she explained, “but it’s very quiet at the moment as is phone work, probably because a lot of other people have also lost their income.”

She added: “Being stuck at home with anyone – wife or housemates or grown children can make it extremely uncomfortable I’d imagine, especially if it involves things like cam or phone which can be easily overheard!”.

Explainer: How to self-isolate

She has praised a hardship fund set up by SWARM, a UK sex worker-led collective that advocate for the rights of everyone who sells sexual services, and criticised charities who present themselves as looking to help sex workers but she claims have now gone quiet in this time of need.

On 27 March, SWARM’s hardship fund for sex workers has paid out crisis grants to more than 125 people in need, with those behind the scheme saying there were 150 more workers on their waiting list in need of emergency funds.

By 3 April, they updated their figures, saying they had helped 234 sex workers in the UK who are in crisis but that their waiting list now has more than 300 of those in need of help.

“Due to the coronavirus pandemic, sex workers across the UK have seen their industry evaporate almost overnight. We know the impact has been severe based on the hundreds of stories we’ve heard in the last two weeks. That’s why we set up this hardship fund,” the collective wrote on Twitter.

The number of people involved in sex work across the UK is not known, partially because of stigma and the hidden nature of the work.

It is not illegal for individuals to buy or sell sex from each other in the UK. Soliciting sex in public is illegal, and those offering services are banned from working together.

Campaigners have been seeking to decriminalise organisations of sex workers in order to improve safety and employment rights, rather than struggling sex workers having to turn to benefits or face continuing work despite the additional risk of the virus.

Lizzy told Sky News: “The fund is important for sex workers, particularly survival sex workers, because we often don’t have savings to fall back on.

“Survival sex workers often start working because they are in a desperate situation already and need money quickly.”

She added: “Most sex workers are indoor workers, which means we either do outcalls to someone’s home or hotel, or take incalls in our own premises.

“When people are told to stay home it stops us travelling to clients and clients travelling to us, and obviously the advice to stay two meters away from anyone not in your household makes having sex with strangers pretty impossible anyway!”

Image: A campaign to decriminalise sex work was marked with a protest in March

Last year, a report commissioned by the Home Office found although “some identify selling sex as a pleasurable and lucrative career choice…a substantial proportion of individuals (mainly women and trans women) are selling sex to get by financially”.

The loss of income from sex work as a result of coronavirus could leave people at risk of becoming unable to afford groceries.

SWARM has reported seeing a sharp rise in the amount of people doing online sex work in the last two weeks, they believe because people “want access to economic resources in order to survive.”

Groups such as the English Collective of Prostitutes (ECP) have called for the government to provide sex workers with emergency money and introduce legislation to decriminalise sex workers as recommended by the Home Affairs Committee.

For those who are unable to seek work online or alternative work, some may continue in-person services.

Gynaecologist Sarah Welsh, who co-founded Hanx, a female-focused sexual health and condom brand, outlined the risks sex workers would be taking if the continued in-person work.

She told Sky News: “We know that being in close contact (within 6ft) of another person who is infected with COVID-19 is close enough to transmit the virus.

“We know it spreads through direct contact with an infected person’s saliva or mucus. Therefore, kissing and being intimately close with another person who is infected is highly likely to spread it.”

She added: “We do know, however, that other viruses similar to coronavirus are not sexually transmitted.

“Using condoms ensure you’re protecting yourself and your partner against STIs, but as coronavirus is spread through droplets when a person coughs or sneezes, any close contact is enough to transmit the virus.”