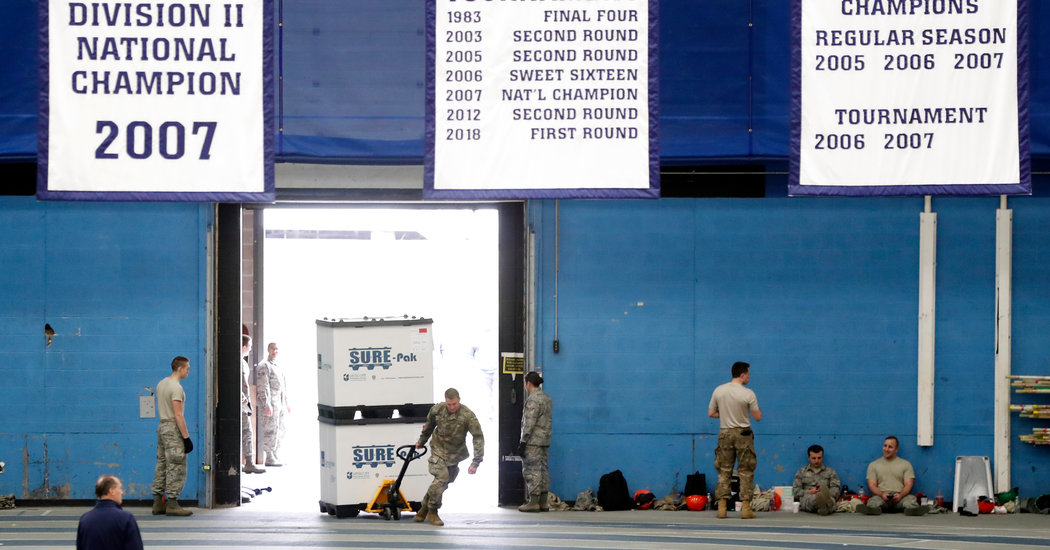 WASHINGTON — In Massachusetts, state leaders said they had confirmed a vast order of personal protective equipment for their health workers; then the Trump administration took control of the shipments.

In Kentucky, the head of a hospital system told members of Congress that his broker had pulled out of an agreement to deliver four shipments of desperately needed medical gear after the supplies were commandeered by the Federal Emergency Management Agency.

Gov. Jared Polis of Colorado thought his state had secured 500 ventilators before they were “swept up by FEMA.”

For weeks, the Trump administration pushed states to procure their own ventilators and protective gear, like masks, gloves and face shields. But a new effort by the administration to create a hybrid system of distribution — divided between the federal government, local officials and private health care companies — has led to new confusion, bordering on disarray, and charges of confiscation.

In a lengthy conference call with governors on Monday, Vice President Mike Pence, the FEMA administrator and the Navy admiral tapped to lead the government’s logistical “air bridge” tried to lay out how the new system worked.

“What the president has stood up through FEMA today is essentially a control tower at the airport,” Mr. Pence said.

“We have the visibility on medical supplies that are moving into this country and are available to vendors in this country,” he said, according to a recording of the call obtained by The New York Times.

Federal officials say they are trying to expedite the shipment to the United States of large quantities of medical supplies procured by private health care providers such as McKesson Corporation, Cardinal Health, Owens & Minor, Medline and Henry Schein. FEMA allows those distributors to sell about half of the equipment to companies and counties that had previously placed orders. The other half of the shipments must be sold to counties that the federal government prioritizes by the severity of the outbreak, based on data compiled by the Centers for Disease Control and Prevention.

The federal government will also soon save 10 percent of the supplies on each flight for the national stockpile, according to officials. A Korean War-era production act also allows the federal government to force companies to prioritize its order over another client’s, whether it be a private hospital or another nation.

The administration pivoted to the system of distribution after President Trump tapped FEMA to replace the Department of Health and Human Services as the agency leading the response to the coronavirus pandemic. States had previously submitted formal requests to the government to obtain materials from the stockpile.

Because the federal government determines which states are in greater need, governors and hospitals executives preparing in advance for the worst have complained that FEMA was effectively commandeering their personal protective equipment, or P.P.E.

“FEMA realizes that prioritizing P.P.E. deliveries to Covid hot spots can have the unintended consequence of disrupting the regular supply chain deliveries to other areas of the country that are also preparing for the coronavirus,” said Lizzie Litzow, a FEMA spokeswoman, adding that the agency was not seizing any shipments.

The intervention has confused some local officials and company executives who have watched as the administration has repeatedly called on states to find medical supples on their own without relying on the federal government. But hundreds of hospitals continue to struggle with widespread shortages of test kits, protective gear for staff members and ventilators, according to a new report by the inspector general for the Department of Health and Human Services.

The chaotic race to procure such supplies has also drawn fraudsters looking to hoard items and resell the equipment at a steep price. A number of F.B.I. investigations are already underway.

Some states also trying to bring order to the process on their own.

California, the most populous state, with 40 million people, is attempting to band with smaller states to procure supplies. The collaboration is aimed at ensuring that smaller states do not lose out to California, which because of its size has the ability to outbid others.

“This has been described, I think appropriately, as the wild, wild West,” Gov. Gavin Newsom of California said on Sunday. “We are trying to organize in a more deliberative manner.”

Adding to the disarray is the White House’s ad hoc system of disaster response in which the right call to Mr. Trump can result in one county getting priority over another. Advisers to Jared Kushner, the president’s son-in-law, have surprised FEMA officials in recent weeks to deploy supplies to communities after the area’s representatives got through to Mr. Trump, even if the state had not yet gone through the formal process to secure supplies.

For instance, after Mr. Trump heard from friends that the New York public health system was running low on critical supply, Mr. Kushner directed agency officials to ensure that there were enough N95 masks in the administration’s inventory, Mr. Kushner said at a White House briefing.

Now, Democratic governors are trying to balance how to put pressure on the Trump administration without entirely rupturing their relationship.

“It would be like high school cafeteria drama if it weren’t life or death,” said Jared Leopold, a political consultant and the former communications director for the Democratic Governors Association.

“He’s basically playing political games around life-or-death issues and leaving states to fend for themselves, which is unheard-of for a president to show zero federal leadership in the middle of a national crisis,” Mr. Leopold said.

Confusion still plagues some communities. After Somerset County, N.J., secured an order of 35,000 N95 and other surgical masks, the shipment was taken by the federal government, Shanel Y. Robinson, the county’s freeholder director, told The Franklin Reporter & Advocate.

Garren Colvin, the head of the board for the Kentucky Hospital Association, wrote last week to members of Congress saying that four shipments of protective gear were taken by FEMA before they could be delivered to the hospitals that had originally contracted for the supplies.

Private companies have also appeared to lose out on supplies. Dr. Ed Ellison, one of Kaiser Permanente’s top doctors and executives, told staff members last month that the company found 20 million masks to purchase the previous week and that Kaiser’s chief executive had authorized a payment for it that was more than usual because of rising mask prices.

“But the feds actually seized that shipment before we were able to acquire it,” Mr. Ellison told staff members, according to a recording of the call reviewed by The Times. “And that’s their right. They’re helping to put together for the nation, but just it goes to show you how challenging procurement can be.”

When asked by The Times days later about the call, a Kaiser spokesman said company officials were unable to find evidence that the government took Kaiser’s masks. The spokesman said the initial information came from a middleman.

Yet in an internal notice to some workers on Monday, Kaiser Permanente said that Cardinal Health, its main supplier of isolation gowns, notified the health system “that FEMA is intervening and taking the U.S. supply from the Cardinal China manufacturer. We will still receive a small resupply under a protected allocation. However, there are very few other sources for isolation gowns.” As a result, Kaiser told workers to conserve the gowns they had.

When asked about the complaints from some states and hospitals, Janet Montesi, a FEMA spokeswoman, said the agency’s flights were accelerating the arrival of gear to the United States and that its distribution strategy was designed to ensure that hard-hit areas could get needed supplies and not be gouged for them.

She said some states that were complaining now could later become beneficiaries of the program if their areas are hit hard by the virus. Given the extreme demand and severe shortage of supplies, she said, “that’s just the reality of what we’re living in.”