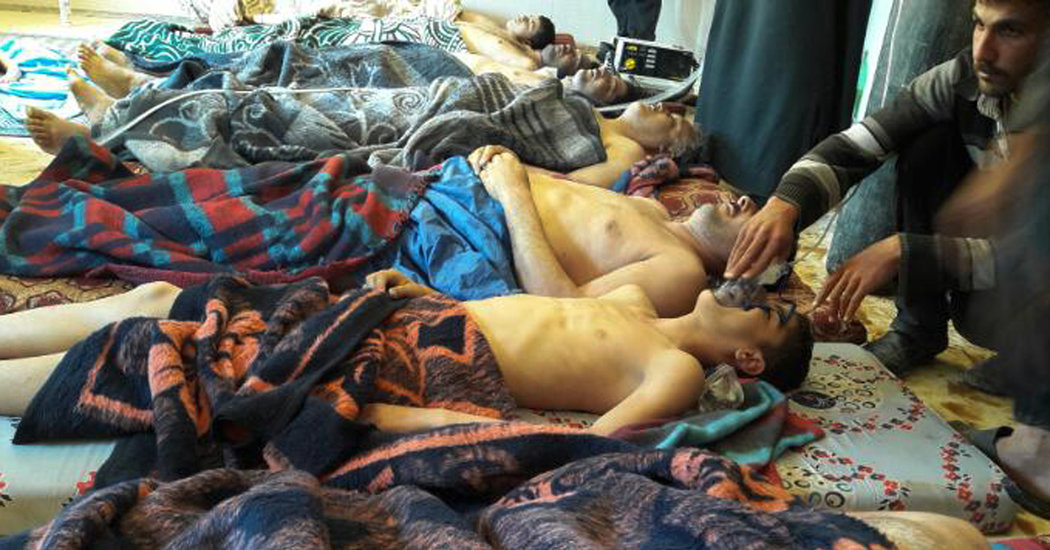 BEIRUT, Lebanon — An investigative team with the international group that monitors compliance with the chemical weapons ban accused the Syrian government on Wednesday of having launched three chemical weapons attacks on one village in northern Syria in March 2017, sickening scores of people.

The team, established by the Organization for the Prohibition of Chemical Weapons, said in a report that in the span of one week, Syrian fighter jets had twice dropped bombs containing sarin nerve agent on the village and a helicopter had targeted its hospital with a cylinder containing chlorine.

Reports of chemical weapons use have surfaced frequently during Syria’s nine-year civil war, and officials from the United States, Turkey and other countries have accused the Syrian government of using banned weapons to try to break the back of the rebel movement that is seeking to oust President Bashar al-Assad.

The O.P.C.W. verified the use of chemical weapons in many of these cases, but had refrained from assigning blame for who deployed them, raising criticism from activists that holding back such judgments diminished the chances for accountability.

So the organization established an investigative body, known as the Investigation and Identification Team, that was assigned to determine responsibility for chemical weapons use in Syria. The report on Wednesday was the team’s first, and it pointed the finger at Mr. al-Assad’s forces.

The team based its investigation on a range of evidence, including witness testimonies, videos, forensic reports on recovered munitions scraps, medical records and satellite imagery, the report said.

While acknowledging reports of dozens of chemical attacks in Syria, the report focused on three, in the rebel-held village of Ltamenah in northern Syria during the last week of March 2017.

The investigative team said it had examined alternative possibilities for each attack, including claims by the governments of Syria and Russia, a close Syrian ally, that the attacks had been staged by anti-government activists to demonize Mr. al-Assad’s government. But the team called its conclusions “the only ones that could be reasonably reached from the information obtained.”

Such attacks, the team’s report said, could only be carried out based on orders from “the highest levels” of the Syrian military. But names of those believed responsible were redacted from the public version of the report.

Despite the mounting evidence of repeated chemical weapons use by Mr. al-Assad’s forces, little has been done by the international community to hold them or their leaders accountable. But Wednesday’s report provided some consolation to survivors of the attacks it described.

“Until today, my bones, my eyes are hurting,” said Ahmad al-Rahmoun, who passed out after breathing in gas from the attack on March 30. But he wondered why it had taken so long for an international body to assign blame.

“Why did they wait until today to accuse Bashar?” he said of Mr. al-Assad, calling for him to be prosecuted as well as “all the pilots behind such attacks.”

The Syrian government has denied throughout the war that its forces have used chemical weapons while accusing rebels and anti-government activists of faking attacks to generate international sympathy. Russia and Iran, another strong ally of Mr. al-Assad, have backed his denials.

The O.P.C.W. team said in its report it had received no cooperation from the Syrian government in its investigation, nor was it able to visit the attack sites.

The Syrian government did not immediately comment on the findings. The United States, a strong supporter of the team’s investigation, welcomed the report as a demonstration of what Secretary of State Mike Pompeo called O.P.C.W.’s “unbiased and professional” work.

“No amount of disinformation from Assad’s enablers in Russia and Iran can hide the fact that the Assad regime is responsible for numerous chemical weapons attacks,” Mr. Pompeo said in a statement.

The attacks in Ltamenah received little attention at the time because they did not kill anyone, but they came just days before a Syrian government chemical attack on another town nearby, Khan Sheikhoun, killed more than 80 people on April 4, 2017.

President Trump responded to that attack by ordering the launch of 59 Tomahawk cruise missiles at military sites in Syria to punish Mr. al-Assad for using chemical weapons.

The White House later declassified a report that accused Syria of not only carrying out the attack, but also working with the Russian government on a disinformation campaign to deflect blame.

After the deadliest chemical attack in Syria’s war, on an area near Damascus known as Ghouta in August 2013, Russia facilitated an international agreement for Syria to give up its chemical weapons stockpiles and dismantle its capabilities.

While members of the Obama administration lauded the agreement for getting rid of Syria’s chemical weapons peacefully, reports of chemical attacks by Mr. al-Assad’s forces continued to surface.

The three chemical attacks attributed to the Syrian government in Wednesday’s report came after Syria was supposed to have relinquished all of its chemical weapons.