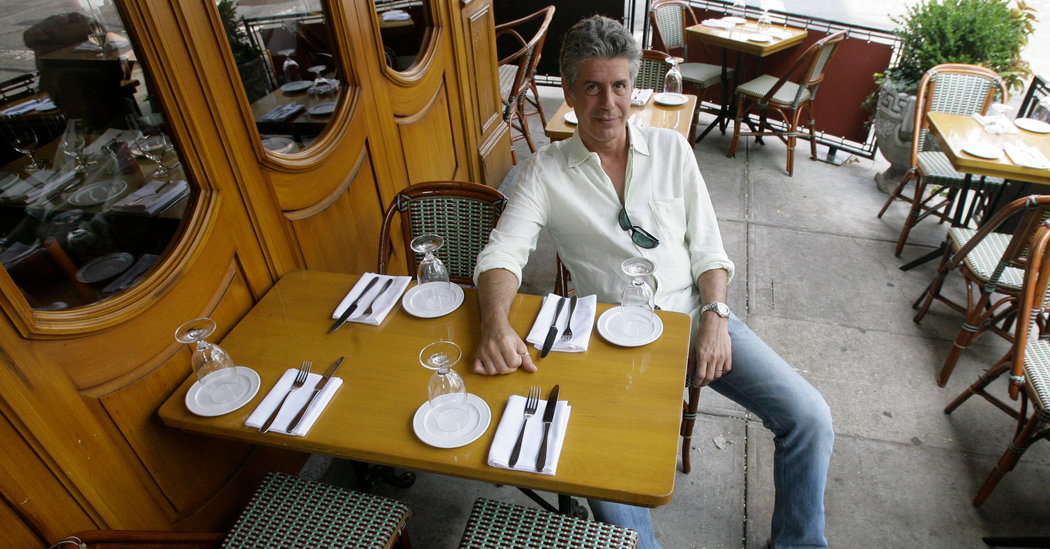 There’s no getting around it: Most of us won’t be traveling for a good, long while. There are certainly more pressing concerns — personal health, supply lines, stocking the pantry, caring for the children — but the anticipation and inner peace of an upcoming vacation, a family gathering, or a trip abroad have now disappeared, and who knows for how long. It’s neither safe nor (increasingly) possible to visit Norway or Brazil or France or anywhere else when you’re stuck in your home.

But maybe it is. One of the genuine delights of the streaming era is the degree to which it has made international television available, and readily too — with scores of shows streaming on Amazon, Hulu, HBO and (especially) Netflix. Sprinkle in an assortment of travelogues and you can go all over the world, from the comfort (and confines) of your couch. Here are some of the best shows for treating cabin fever:

Any respectable world television tour should begin with Anthony Bourdain’s globe-trotting food and travel docu-series, in which the late, great celebrity chef visits places large and small, from Singapore to Saudi Arabia to Sweden, taking in the local cuisine, culture and citizens. (And he doesn’t slouch on the scenery, either — the series twice won the Emmy award for Outstanding Cinematography for Nonfiction Programming.) Over the course of its nine-season run, it became clear that Bourdain wasn’t just out to see sights or swipe recipes; the show seemed like his personal mission to correct the Ugly American stereotype, and to remind us that when we’re abroad, we should aim to be travelers rather than tourists. (Read The New York Times review.)

“Food is the great connector,” says Phil Rosenthal, “and laughter is the cement.” This Netflix original often plays like a comic riff on “No Reservations” (though that show is frequently funny itself), as the nebbish “Everybody Loves Raymond” creator travels to Lisbon and Buenos Aires and other places around the globe, in an attempt to “go to the source” of some of his favorite foods — and take in the world in the process, with most of the show’s laughs generated by the incongruity between his markedly urban American persona and the kind of “roughing it” often required by these locales.

There’s a long, rich tradition of British comedians “presenting” travel programs, from Michael Palin’s marvelous BBC docu-series (“Around the World in 80 Days,” “Pole to Pole,” “Full Circle,” etc.) to the ongoing “Trip” series (to northern England, Italy, Spain and Greece) with Steve Coogan and Rob Brydon to this Channel 4 treat, in which the comic actor and director Richard Ayoade (“The IT Crowd”) visits the great cities of the world for 48 hours with a celebrity guest. The results are enjoyable as both a travel series and a parody of them; Ayoade and his friends hit the must-see sights and capture the beauty of these hot spots, but also detour to goofier locations, indulging in wry commentary and awkward interplay.

Narrator David Attenborough and the team behind his acclaimed BBC series “Planet Earth” spent four years crafting this eight-part Netflix original with two purposes: to celebrate the world we inhabit, and to note the disruptions and dangers that have entered its ecosystems. That message remains vital, but the show’s sense of wonder and powerful visuals are not to be denied and, as the entire series was shot with 4K cameras — taking in images of Indonesian jungles, Central African Deserts, the forests of Madagascar, the Atlantic Ocean and the Arctic on a big flat screen — this is about as close as you’re going to get to the real thing. (Read The New York Times review.)

From “The Matrix” trilogy to “Cloud Atlas,” the Wachowskis have never lacked in ambition, and their two-season Netflix series has exotic locations built into its premise, which connects eight strangers in eight cities with each others’ lives and worlds. In telling that story, they covered as much ground as any travel show, with breathtaking photography in Mumbai, London, Seoul, Nairobi, Mexico City, Berlin, Naples, Malta, Amsterdam, São Paulo and many, many more places. (Read The New York Times review.)

When the screenwriter David Farr and the director Susanne Bier adapted John le Carré’s 1993 spy novel for television, they not only updated the time period, but tweaked the locations — shooting the sleek, glossy tale in Switzerland, Marrakesh and Spain (of particular note: a gorgeous Spanish villa for the villain Hugh Laurie). The le Carré purists may object, but the rest of us will be too busy luxuriating in the Continental flavor and sun-soaked photography. (Read The New York Times review.)

Spy shows and films generally hopscotch around the globe, which makes them especially ripe for wanderlust viewing, and though the smash BBC America adaptation of Luke Jennings’ “Villanelle” novels is, in many ways, a subversion of the spy series conventions, one must often embrace those tropes to send them up. So the MI6 agent Eve Polastri must trek from London to such locales as Tuscany, Berlin, Bucharest, Paris, Amsterdam, Rome and other places in her pursuit of the high-level assassin Villanelle (Jodie Comer). (Read The New York Times review.)

Streaming on Hulu and BritBox.

Henning Mankell’s series of detective novels, previously adapted into films and a series for Swedish television, are here dramatized by British TV with the quintessentially British actor Kenneth Branagh in the role. But the series keeps the original Swedish setting, and to great effect; Times critic Mike Hale praises the show’s use of “the stark, flat expanses of the southern Swedish coast, with their shimmering fields and lonely trees outlined against big blue-gray skies.” (Read The New York Times review.)

And from here our world tour takes us to Norway, for this ongoing series from the minds behind such archetypal Scandinavian crime films as “Insomnia” and “Headhunters.” This fast-paced political thriller, in which high-minded Norwegian government officials cease production of oil and gas in the face of climate change, only to find their country occupied by Russian forces, offers up not only the snowy landscapes we’ve come to expect, but plenty of urban portraiture as well. (Read The New York Times review.)

Next stop: Germany, for this extravagantly mounted, neo-noir series, set during the city’s pre-Hitler, Weimar Republic era. The production — reportedly the most expensive in German TV history — leans heavily on a giant, permanent standing set at the Babelsberg Studio, but also uses copious locations throughout the city (and country), including the Theater am Schiffbauerdamm, the Berlin City Hall, the Protestant Church of the Redeemer, and the Bavarian Railway Museum. (Read The New York Times review.)

On the other hand, if you’d like to visit small-town Germany in the present day (sort of), we can pay a visit to the forest village of Winden, the setting for this dizzyingly complicated and moodily atmospheric Netflix original. Winding together four families and three generations of tragedies — kidnappings, suicides, murders — that often converge in the dark and scary woods, this one is frightening enough to make you feel all right about staying indoors. (Read The New York Times review.)

The French film industry gets the “Curb Your Enthusiasm”/“Extras” treatment with this inside-showbiz satire, mixing real stars of their big and small screens with the fictional exploits of a rapidly splintering and highly dysfunctional talent agency. The takeaway is that the machinery that keeps things running behind the scenes is far from glamorous (it’s petty, gossipy and back-stabbing), but there’s still plenty of screen time for the glam, and many opportunities to gawk at the Parisian scenery and high-powered red carpets. (Read The New York Times review.)

Some series float through their locations, only making fleeting connections. But HBO’s ongoing adaptation of Elena Ferrante’s Neapolitan novels isn’t just set in Italy in the 1950s; it’s dug in there, intimately aware of every stairwell, courtyard and apartment in its working class neighborhood. It’s a setting, James Poniewozik writes, “where everyone is packed close and prying eyes and whispers are inescapable.” But the series also offers gorgeous glimpses of the world outside that neighborhood, of an upper-crust area of Naples, or a resort island. It’s a welcome reminder that even when things are bleak, escape is still possible. (Read The New York Times review.)

And on we travel, both around the globe (to South Korea) and back in time (to the 16th century) for this Netflix original, gleefully mixing historical drama, zombie horror, swordplay, political satire and (gulp) contagion thriller — and mounted on a grand scale, with big, colorful action sequences carefully choreographed in gorgeous forests and rolling vistas. Mike Hale picked it as one of the best international shows of the decade, and praised the “rousing” series for its “rich production values.” (Read The New York Times review.)

And we land in both London and Tokyo for this recent Netflix addition (a pickup from BBC Two), a cross-cultural story of a Tokyo detective (Takehiro Hira) attempting to track down his gangster brother in the criminal underworld. Aiding him in the search — as best she can — is a London police detective (Kelly MacDonald), whose perpetual mood seems to take its cues from the city: cold and gray. But the show also beautifully captures the neon glow of these cities at night, when the respectable citizens clear the streets, and things start getting interesting.

Streaming on Netflix and Starz.

There’s a strange circularity about watching (or, likely, rewatching) Starz’s adaptation of Diana Gabaldon’s books for the scenery — since a fair number of its enthusiastic viewers have gone to central Scotland for the primary purpose of visiting its locations. And they’re gorgeous, rolling hills and venerable castles and foggy marshes and leafy forests, offering even more escape than we were already enjoying from this tale of a 1940s woman inexplicably zapped into 18th-century Scotland. And she does what we’re all trying to do: she makes the best of it. (Read The New York Times review.)

By the time this thing is over, we may not even want to be landlocked anymore — and there’s no better show for taking to the high seas than Starz’s four-season pirate adventure/drama, presenting the origin story of Long John Silver. Though set in the West Indies circa 1715, the series was shot in South Africa, which convincingly doubles for the region; the blue waters are crystal clear, and the beaches would be irresistibly inviting were it not for all those pesky pirates. (Read The New York Times review.)

And finally we land at the top of the world — well, close to it, on the Arctic island of Fortitude, setting of this Sky Atlantic mystery/thriller series. Fortitude, however, is a fictional location (that’d be just a bit too nice and neat), so the three-season series was shot in Iceland and Norway; its icy glaciers and snow-capped mountains could come in handy if we’re still indoors this summer. (Read The New York Times review.)