The deadly mix of Covid-19, air pollution, and inequality, explained

Air pollution is down across the United States right now as car and truck emissions plummet from mass social distancing. But decades of high levels of pollutants like particulate matter, ozone, and nitrogen dioxide have had a chronically negative impact on health.

Millions of Americans currently have conditions, like hypertension and asthma, that can be connected to air pollution. And those same diseases are now associated with severe cases of Covid-19.

But they’re not distributed equally. Minority populations are bearing the brunt of this often-deadly link.

On April 5, a pre-print study released by the Harvard T.H. Chan School of Public Health directly linked air pollution to the probability of more severe Covid-19 cases. That joins decades of scientific literature that suggest race and income impact how much chronic air pollution you are exposed to. And it could be a major factor in the disproportionate Covid-19 mortality rates we’re now seeing in non-white populations.

It’s well known that minorities shoulder a larger burden of the country’s disease. “Racial inequalities have to always be put in a larger societal context,” says Nancy Krieger, a professor of social epidemiology at the Harvard T.H. Chan School of Public Health who was not involved with the pre-print. “You’ll see they are inevitably intertwined with economic inequality and inequality of political power.”

Lubna Ahmed, director of environmental health at New York City nonprofit WE ACT for Environmental Justice, is blunter. “Making a statement like saying the black community is at higher risk without providing context is dangerous,” she says. “It’s not genetics that makes us more susceptible. You have to understand this is going back to issues of environmental racism. And it’s not something that’s unique to Covid-19.” 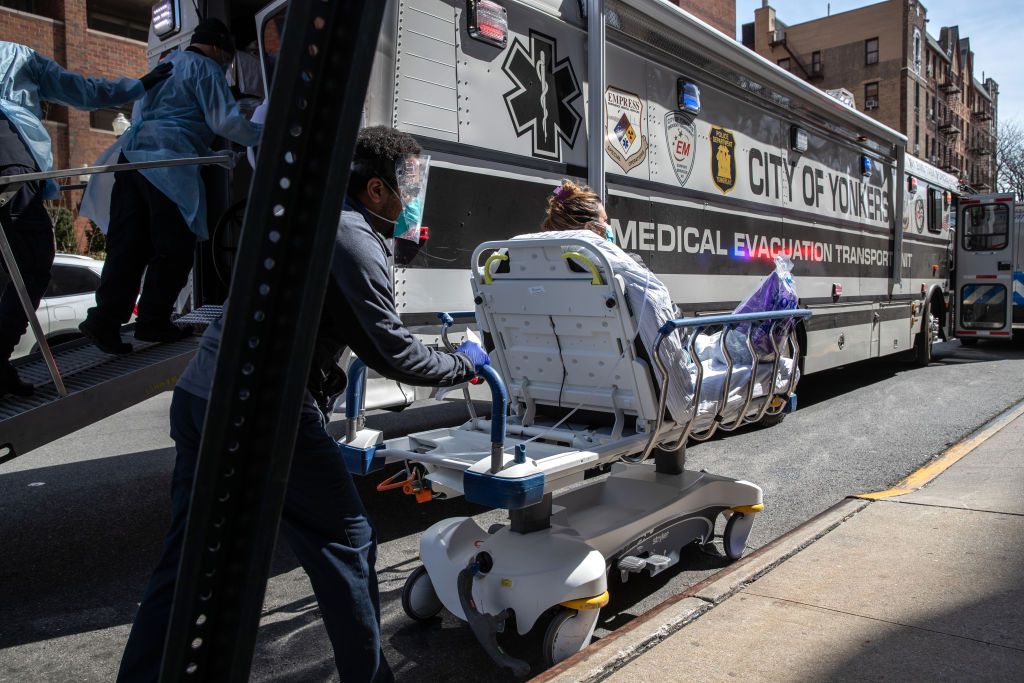 Even before Covid-19, higher exposure to air pollution has made people more likely to develop diseases like hypertension, says Tarik Benmarhnia, an environmental epidemiologist at University of California San Diego who studies air pollution.

Negative health effects of being around air pollution — like deadly cardiovascular disease —have been recorded even at pollution levels lower than the most conservative US air quality standards. There appears to be no safe level of particulate matter — emitted from power plants, industries, and vehicles — for humans. And the more pollution you are exposed to, the worse health outcomes can become.

The damage from air pollution can begin even before some people are born: Researchers have found “soot particles” in mothers’ placentas, suggesting particulate matter that the mother breathes may impact fetal development. Exposure to air pollutants has been linked to low birth weight and premature births, which in turn have been linked to decreased lung function. And links between air pollution and childhood asthma deaths are well-established.

Mychal Johnson, a Bronx resident and co-founding member of the advocacy group South Bronx Unite, says that in the Bronx, “We already had higher rates of children missing school because they had to go to the hospital for respiratory problems.” Every year, the Bronx has 21 times more asthma hospitalizations than other New York boroughs, and over five times the national average.

The neighborhood, Johnson says, is known as “asthma alley,” and he and his family breathe the emissions of the hundreds of diesel trucks that stream from the neighborhood’s warehouses and along local highways. It is not unrelated that 44 percent of the Bronx is black. Nationwide, black children are 500 times more likely to die from asthma than white children, and have a 250 percent higher hospitalization rate for the condition.

These negative health effects just get worse as you get older. “Throughout your life, you’re accumulating air pollution exposures,” says Rachel Nethery, a biostatistician at the Harvard T.H. Chan School of Public Health who co-authored the new pre-print. Air pollution exposure in young adults has been linked to abnormal changes in the blood, which can lead to heart disease and high blood pressure later in life, both risk factors for severe and fatal Covid-19 cases. In adults, this has been closely associated with cardiovascular disease and diabetes.

Even before the coronavirus pandemic, the World Health Organization estimated that air pollution is responsible for 7 million premature deaths a year worldwide. Air pollution is considered the largest environmental risk factor for disease in the US. (Despite the ample evidence of harm, because of Covid-19, the Trump administration has suspended the enforcement of clean air rules.)

“In the midst of the direct effects of decades-long industrial effects on our community,” Johnson says, “the Bronx is the most unhealthy county in the state, not because of anything the people in this community have done.” Covid-19, he adds, just “proves the point.” As of April 9, black and Latino people account for 62 percent of New York City’s confirmed deaths — but just 51 percent of the population, and Bronx residents show particularly high death rates. (True Covid-19 death tolls are likely significantly higher than have been reported.)

This is consistent with other health data. A recent PNAS study found that across the US, black and Hispanic people are exposed, respectively, to 56 and 63 percent excess exposure to air pollution — bearing the brunt of these health impacts. While these studies have focused on air pollution, there are many other examples of people of color being exposed to disproportionate environmental hazards that impact their health. Benmarhnia worries that as a result, Covid-19 is “just going to exacerbate inequalities.”

Nethery and her coauthors used data from counties across the country to see how air pollution might impact Covid-19 cases. The team found that an increase of one microgram of fine particulates per cubic meter is associated with a 15 percent increase in the Covid-19 death rate. That’s significant; as a comparison, the EPA says an acceptable level of annual exposure is an average of 12 micrograms per cubic meter.

Nethery says that although the study wasn’t designed to look at race, the model adjusted for the racial composition of counties — and race still ended up being “the largest effect, hugely statistically significant.” She adds, “It was pretty shocking.” 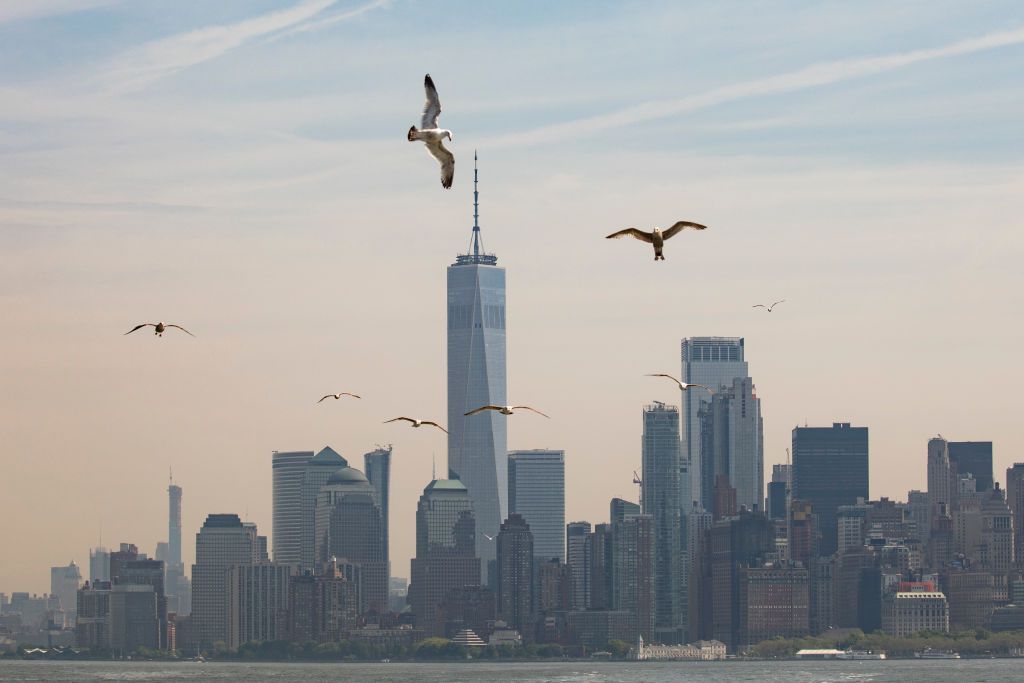 Haze covers the lower Manhattan skyline, seen from Staten Island on May 17, 2019 in New York City. According to an annual report issued by the American Lung Association, the New York metro area had the 10th worst air quality in the nation in terms of elevated levels of lung-damaging ozone pollution between 2015-2017. Drew Angerer/Getty Images

Adding another layer to the issue is that uneven ability to access health care has led to further inequalities in health. “That makes quite the whammy,” Krieger says.

According to the American College of Physicians, “minorities have less access to health care than whites.” During a global pandemic, for example, it’s harder for families who might not already have a primary care physician to access telehealth resources.

Joseph Ravenell, a professor of population health at NYU Langone Health, says that in addition to lack of access, there can be a “level of mistrust” in some communities, in part because of historical unethical practices of using black people as test subjects, as well as previous experiences of racism within the health care system. A 2016 study in PNAS found widespread false beliefs held by medical staff about biological differences between blacks and whites, as well as racial bias in pain assessment and treatment.

“There’s structural racism and economic inequalities, and they both matter and can compound each other”

People of color might also have less ability to implement public health recommendations; as Krieger notes, despite a recent CDC recommendation to wear masks when in public, many people of color are justifiably afraid of wearing a mask into a store and being seen as a threat.

There’s also an economic component to these structural inequalities: black people, Hispanics, and Asians have statistically higher levels of uninsurance rates than white people. “There’s structural racism and economic inequalities, and they both matter and can compound each other,” says Krieger. “It’s not an either or.”

“We’ve known literally forever that diseases like diabetes, hypertension, obesity, and asthma are disproportionately affecting minority populations,” Dr. Anthony Fauci, director of the National Institute of Allergy and Infectious Diseases, said at an April 7 press conference. “There’s nothing we can do about it right now.”

While he emphasized ensuring these communities get the best possible care, that kind of shoulder-shrugging is at the root of the problem — and shows there’s never a convenient time to address a problem like this.

But there are actually things that could be done right now: For one, expanding federal financial coverage for testing and treatment of Covid-19 so that low-income people have equal access to care. And, as John Balmes, a pulmonologist and spokesperson for the American Lung Association suggested to the New York Times, ensuring that hospitals in the most at-risk neighborhoods are prepared and prioritized for critical supplies.

What’s not helpful is placing blame on people of color: For example, US Surgeon General Jerome Adams, during a press briefing at the White House on April 10, cautioned minorities to “avoid alcohol, tobacco, and drugs.” This isn’t a problem of personal responsibility — it’s one of inequality.

Ahmed says she hopes Covid-19 will help both the general public and key decision-makers to understand that “helping the most vulnerable communities equates to helping everyone— slowing the spread of disease everywhere.”

Lois Parshley is a freelance investigative journalist and the 2019-2020 Snedden Chair of Journalism at the University of Alaska Fairbanks. Follow her Covid-19 reporting on Twitter @loisparshley.