Home Uncategorized The East Coast, Always in the Spotlight, Owes a Debt to the...
Uncategorized

The East Coast, Always in the Spotlight, Owes a Debt to the West 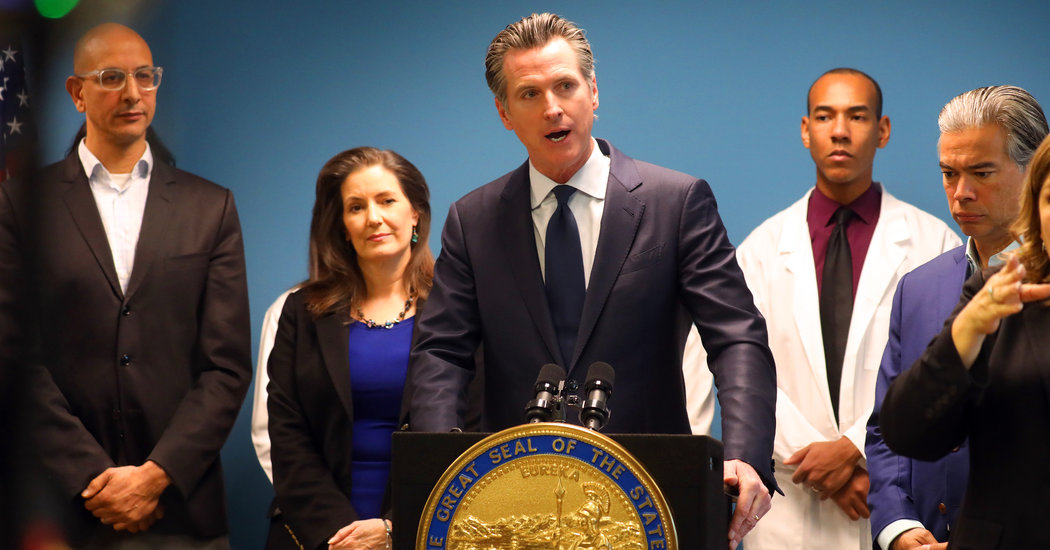 LOS ANGELES — California, Oregon and Washington have more ventilators than they can use. As the nation struggles to scrounge up the lifesaving machines for hospitals overrun with Covid-19 patients, these three Western states recently shipped 1,000 spares to New York and other besieged neighbors to the East.

“All NYC needs is love …. From CA,” a worker scrawled in Magic Marker on a ventilator shipping box, shown in a video posted on Twitter by the governor of California, Gavin Newsom.

The ongoing effort of three West Coast states to come to the aid of more hard-hit parts of the nation has emerged as the most powerful indication to date that the early intervention of West Coast governors and mayors might have mitigated, at least for now, the medical catastrophe that has befallen New York and parts of the Midwest and South.

Their aggressive imposition of stay-at-home orders has stood in contrast to the relatively slower actions in New York and elsewhere, and drawn widespread praise from epidemiologists. As of Saturday afternoon, there had been 8,627 Covid-19 related deaths in New York, compared with 598 in California, 483 in Washington and 48 in Oregon. New York had 44 deaths per 100,000 people. California had two.

But these accomplishments have been largely obscured by the political attention and praise directed to New York, and particularly its governor, Andrew M. Cuomo. His daily briefings — informed and reassuring — have drawn millions of viewers and mostly flattering media commentary. They have established him as a daily counterpoint to President Trump and even prompted Democratic daydreaming that he could be drafted as their presidential nominee.

“Cuomo is just extraordinary to watch: He’s so real and authentic,” said Dr. Robert M. Wachter, the chairman of the department of medicine at the University of California, San Francisco. “But when this history is written, you have to look at what the mayors here did, what the public officials did, what Newsom did, and say they saved thousands of lives.”

This disparity in perception reflects a longstanding dynamic in America politics: The concentration of media and commentators in Washington and New York has often meant that what happens in the West is overlooked or minimized. It is a function of the time difference — the three Pacific states are three hours behind New York — and the sheer physical distance. Jerry Brown, the former governor of California, a Democrat, found that his own attempts to run for president were complicated by the state where he worked and lived.

“News in this country flows east to west, always has and always will, but political and cultural movements flow west to east,” said Averell Smith, a longtime Democratic strategist who how worked in campaigns nationwide and grew up in San Francisco, where his father was the district attorney.

The different responses that have been on display during these difficult weeks also illustrate the cultural, political and philosophical ways in which California, Washington and Oregon are distinct from the rest of the nation, a trend that has only accelerated since President Trump was sworn in.

California and Mr. Newsom have been under fire for delays in developing tests for the virus; New York has far outpaced California in testing potential victims. But the six Bay Area counties, including San Francisco, announced shelter in place orders on March 16. Mayor Eric Garcetti issued a stay at home order for the city of Los Angeles on March 19. Later that day, Mr. Newsom issued a statewide stay-at-home order.

Mr. Cuomo, who earlier that week had resisted a call from Mayor Bill de Blasio of New York to issue a stay-at-home order, followed a day later for New York — but that not take effect until March 22. Epidemiologists said that given the speed with which the virus spread and the density of parts of New York City, that delay was troubling.

“I remember seeing Governor Cuomo on TV making comments about not wanting to take away people’s civil liberties,” said London Breed, the mayor of San Francisco. “I understand that, I totally understand that, But I don’t think that’s what we were doing. I know the information I had. It showed me the best-case and worst-case scenarios and provided the guidance to avoid the worst-case scenarios.”

The West Coast is different than the East Coast in many ways.

There are few cities on the Pacific with the sort of population density as skyscraper-filled New York and other metropolitan parts of the northeast.

And the mostly liberal politics of the west coast paved the way for
the kind of early interventionist policies that were until recently resisted in much of the country.

“There’s not a general sense that government is somehow the enemy rather than an essential part of life,” said Janet Napolitano, the former governor of Arizona who is now the president of University of California.

It is a region with a heavy concentration of tech industry engineers and executives, particularly in Washington, Oregon and, of course, Silicon Valley. The tech industry, including companies like Google and Apple, took the lead in having employees work from home. “We’re adept at understanding and accepting science,” said Gov. Jay Inslee of Washington. “Looking over the horizon at threats earlier than perhaps other parts of the nation.”

In Oregon, Gov. Kate Brown said she had been “blown away by how receptive Oregonians across the political spectrum” have been to the demands of the moment and she offered a theory as to why. “We’ve been preparing and thinking through these crises, and I do think at some level it permeates the public’s consciousness,” she said, citing the frequent natural disasters that have befallen her state.

And the Pacific states are more connected to Asia, with a large population of Asian immigrants, so the threat of a medical calamity in the Far East did not seem as remote as it might in Maine and Georgia. “We saw it a little bit earlier,” said Mr. Inslee. “There’s just geography: We’re closer to China.”

In Los Angeles, Mr. Garcetti said officials saw early warnings in the low attendance at the Lunar New Year parade in early February and the small crowds on the sidewalks in Chinatown. “I think we had an earlier sense that this might actually touch us,” he said. “We have planned for a long time for a pandemic.”

Shutting down an economy — in the fact of deep concerns of workers and the business community — is one of the most difficult decisions an elected official can make, as has become clear this month.

“It’s easy now to look at Newsom and London Breed and say, ‘of course,’” Mr. Wachter said. “But there was a lot of pushback at the time. If they had made the wrong bet, it would have been politically disastrous.”

“California and the Bay Area response is impressive because it was done before there were obvious and tangible risks,” he said. “New York acted in a more predictable way. Once it became clear it was real they took a step to lock down the place. In retrospect it was late, it was too late.”

Mr. Newsom said he had never thought California would be in a position where it would be giving away ventilators to other states. The idea of requiring people to stay at home was intended to slow the pace of the virus and give California officials time to find ventilators or refurbish ones in the state’s stockpile to prepare for a crush of patients.

“We never imagined we’d be in that privileged position,” the governor said. “Had we not done what we did, we would never have been in that position. Quite the contrary, we would have been calling on other states to help us.”

Evan Westrup, who was Mr. Brown’s senior communications adviser for eight years, said he had become resigned to California’s accomplishments often being overlooked in the rest of the nation. “There’s been little sustained national interest or coverage of California in recent years other than when the state is on fire, flooded or facing severe drought and/or attacking Trump. Los Angeles may as well be London to most editors in D.C. or New York.”

But if their prompt response has been overshadowed, Pacific Coast residents living through this crisis don’t seem to be giving that a lot of thought.

“This is a community that’s not self-obsessed and looking for recognition, adulation or credit,” said Bill Walton, the San Diego native, former UCLA basketball great and noted Pacific evangelist.

As for the attention to Mr. Cuomo, Mr. Inslee only praised his fellow governor, calling the nationally-televised briefings from Albany “really helpful to the whole country,” while expressing resignation about the disparity in coverage.

“We’re not going to change the direction the sun rises,” he said.