Home Uncategorized 'The message might get across better': Winnipeg family builds Lego video of...
Uncategorized

'The message might get across better': Winnipeg family builds Lego video of PM's COVID-19 message to kids 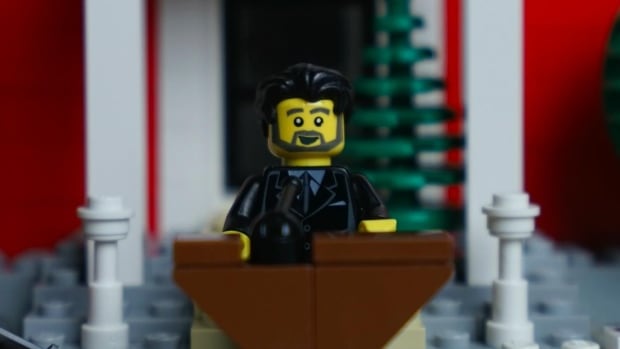 A Winnipeg family has hit the bricks to share Prime Minister Justin Trudeau’s message to children in a video that features little Lego versions of him and reporters, as well as a cameo appearance by Manitoba’s top public health officials.

When Trudeau used one of his daily news conferences last month to speak directly to young people about how they can help slow the spread of COVID-19, Tyler Walsh decided to capture those words in a stop-motion video.

Walsh told CBC’s Up To Speed host Ismaila Alfa that he wanted to find a more creative way to reach the target audience, like his sons, who are nine and 12.

“The idea just kind of popped in my head: ‘What if I take the audio from the prime minister and kind of combine it with some Lego? People might like that and they might think it’s interesting and the message might get across better,'” he said.

Walsh and his boys, Jack and Noah, were working on another Lego project, which they set aside to start the new challenge to take up some of their newfound free time at home.

The three spent about 12 hours over the course of a week building sets, assembling Lego people into their characters, and then moving them around ever so slightly, taking photos all the while.

The smaller the movements, the smoother the video, according to Walsh.

Each working to their strengths, Walsh said the kids were primarily in charge of piecing together the Lego elements — such as a podium, as well as hair and a bearded head for Trudeau — to bring the set to life.

“I would have questions for them like, ‘I need a sad kid. Do we have any sad kid Lego heads?'”

Walsh, who works as a marketing manager with Economic Development Winnipeg, said his favourite scene is a Lego imitation of his family sitting around the kitchen table.

“They’re sort of front and centre to our COVID-19 fight, so I thought it might be cute when Trudeau was mentioning, you know, ‘listen to the doctors and the scientists,’ to put them in there,” Walsh said.

His tweet about the video has garnered thousands of retweets, including by the Lego company. Trudeau himself even replied:

This is really great, Tyler. I think my kids – and a whole lot of others – will get a kick out of this, all while hearing how they can help out too. Thanks for helping spread that message.

Facebook
Twitter
Pinterest
WhatsApp
Previous article'Report within 24 hours or…': Punjab to Tablighi Jamaat attendees in state
Next articleHow a mask can help in fight against Covid-19