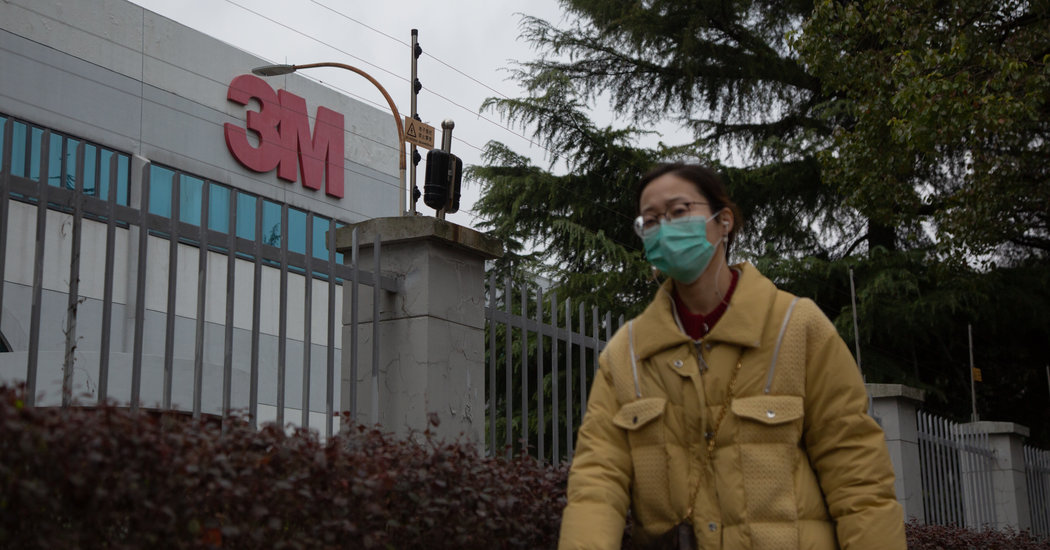 WASHINGTON — The Trump administration is using a Korean War-era law to redirect masks manufactured by 3M in other countries to the United States as a part of a heated pressure campaign against the Minnesota company to cut off sales of surgical masks abroad.

The policy would be a significant expansion of the American government’s reach and a reversal of President Trump’s hesitant use of the Defense Production Act, which allows the administration to force a company to prioritize the U.S. government over competing orders.

But in this case, the administration is invoking the law to compel 3M to send masks made in factories overseas to the United States, a move that some trade and legal experts fear could backfire by prompting foreign governments to clamp down on desperately needed medical necessities.

Peter Navarro, the White House trade adviser who has been put in charge of policy related to the act, leveled a broadside against the venerable Minnesota manufacturer on Friday, all but accusing it of disloyalty.

“While hundreds of other large American multinationals are stepping up with pride and patriotism, 3M remains an outlier and its propaganda war must stop,” Mr. Navarro said, adding that the company was “operating like a sovereign profit-maximizing nation internationally.”

In a statement on Friday, 3M defended its actions and said the administration had also asked it to stop exporting respirators made in the United States to Canada and Latin America — a request it said carried “significant humanitarian implications” for people in those countries.

Mr. Navarro denied the administration had made that demand, but he said the White House was using the wartime act to provide “all of the N95 respirators it can possibly muster to prevent Americans from dying.”

He accused the company of diverting supplies away from hospitals and health care providers overseas to make a profit.

Mr. Trump also lashed out cryptically on Twitter on Thursday night, saying the administration “hit 3M hard today after seeing what they were doing with their Masks.”

In its statement Friday, 3M said that the administration had used the Defense Production Act to request that the company increase the number of respirators that it imports into the United States from its overseas operations, and that it was complying. This week, 3M said, it secured approval from China to export to the United States 10 million N95 respirators that the company manufactures there.

But the company warned against moves to stop its exports.

“Ceasing all export of respirators produced in the United States would likely cause other countries to retaliate and do the same, as some have already done,” 3M said. “If that were to occur, the net number of respirators being made available to the United States would actually decrease. That is the opposite of what we and the administration, on behalf of the American people, both seek.”

That plea fell on deaf ears at the White House on Friday, where the president and Mr. Navarro appeared determined to wage war on 3M.

“All we get from the C.E.O. on down to the head of their P.R. department is lie upon lie, the latest of which — which is dead wrong — is that we demanded 3M not send production from its U.S. plants to our friends and allies in Canada and Mexico,” Mr. Navarro said.

The tense fight between the administration and the manufacturing company comes as the federal government’s national stockpile has dwindled, calls for additional ventilators have intensified and states have been left to compete with each other and with the federal government for a limited supply of medical supples sold around the globe.

Local hospitals and states have accused the federal government of swooping in at the last second to claim deliveries of protective gear for ambulance drivers, fire fighters, police and hospital workers. The Federal Emergency Management Agency says it is simply outbidding local governments and states on certain procurements.

FEMA is taking 20 percent of each tranche of medical gear flown into the United States on large cargo planes, while 80 percent is issued to the private health care industry, according to a senior administration official. FEMA keeps a small portion of that 20 percent of materials and orders the medical suppliers to sell the rest to communities struggling with the outbreak, administration officials said, adding that the next shipment would be distributed to New York, New Jersey and New Orleans. FEMA officials said the initial cargo flights were divided roughly in half between the administration and the private sector.

A wartime era law, the Defense Production Act gives the administration expansive powers to secure supplies, including forcing a company to prioritize the federal government’s contract or even determining the distribution of products made by a company like 3M. But officials warned that using the act to control a company’s overseas production would put that company in the difficult position of being forced to violate its previous obligations to foreign customers to comply with the demands of the American government.

On Thursday night, Lizzie Litzow, a FEMA spokeswoman, said only that Mr. Trump had given federal agencies the authority to issue such orders.

“Obviously the United States can say what they want to happen, but it’s not clear whether there is the legal power of the United States to force an operation in another country to violate the law of that country — even if it’s an American company,” said Ernest B. Abbott, who was the general counsel of FEMA during the Clinton administration.

Increasingly, curbs on medicines and medical devices are surfacing around the world, as countries aim to preserve scarce supplies for their own citizens.

As of Wednesday 68 nations had put limits on exports of medical supplies, according to tracking by Simon Evenett, a professor of international trade at the University of St. Gallen in Switzerland.

Although the administration has been pressuring American companies to ramp up their production of ventilators, masks and other needed products, the United States is still highly dependent on imports of protective gear from China, pharmaceuticals from India and ventilator components from around the world.

“Export bans end up having an unintended negative effect on everybody’s ability to supply these goods,” said Jennifer A. Hillman, a senior fellow for trade and international political economy at the Council on Foreign Relations. “They’re a bad idea.”