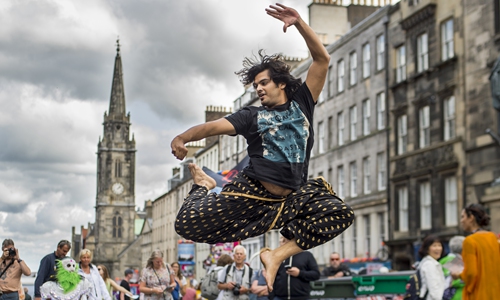 Performers, musicians and actors try to woo crowds on the Royal Mile during Fringe Festival in Edinburgh, Scotland, the UK in 2018. Photo: IC

Edinburgh’s international festivals were canceled for the first time in 70 years on Wednesday because of the coronavirus pandemic, organizers said, in the latest blow to Britain’s thriving arts scene.

Theaters, galleries and museums have been shut down and music festivals such as Glastonbury were called off in line with government measures to cut close-contact transmission of the virus at mass gatherings.

“However, having taken advice and considering all the options, we collectively believe this is the only appropriate response,” she added.

The festivals provide a platform for both professional and amateur performers and are estimated to be worth around $371 million to the local economy.

They comprise more than 5,000 events in Scotland’s capital every August, featuring some 25,000 artists, writers and performers from 70 countries, and audiences of 4.4 million.

The International Festival, which sees musicians, actors and dancers perform at venues in the city, began in 1947 as a way to reconcile people and nations through art after World War II.

The Tattoo, which started in 1950, brings together military performers in a concert outside Edinburgh Castle.

McCarthy said the performing arts had “an important role to play in providing a prism through which to process and understand the multiple traumas of this pandemic.”

Fergus Linehan, director of the Edinburgh International Festival, said the coronavirus crisis made next year’s events even more important.

“We recognize that Edinburgh’s festivals play a very important role in the cultural, social and economic lives of our city and country, and this decision has not been taken lightly,” he added.

“Our thoughts are with all the country’s key workers and we hope that we can celebrate your heroic efforts when this awful pandemic has passed.

“Work begins straightaway on a 2021 Festival season that will boost both our spirits and our economy.”

The festival’s organizers will refund all participant registration fees and tickets for the events.

Some 150,000 people attend the Glyndebourne Festival between May and August every year at a country house near Lewes, in southeast England.

Along with the Wimbledon Grand Slam tennis tournament – which has also been canceled for the first time since World War II – it has traditionally been a fixture of the British summer.

Executive Chairman Gus Christie said all performances had been canceled until July 14.

“This has not been an easy decision to make, and we understand that these cancellations will come as hugely disappointing news to our audience members and company members,” he said.

“Our hearts go out to all our artists and loyal seasonal staff – two-thirds of our total workforce – who face a particularly bleak situation. For them, these cancellations mean the loss of their livelihood,” he said.

Facebook
Twitter
Pinterest
WhatsApp
Previous articleCoronavirus: What does ‘from Russia with love’ really mean?
Next articleRussia’s pilot Konstantin Yaroshenko jailed in US says he has dry cough, fever