'Wartime president' Trump isn't calling all the shots in U.S. battle against COVID-19

During a briefing on Tuesday, President Donald Trump stands in front of a chart showing projected deaths in the U.S. from COVID-19 as 1.5 million-2.2 million without any intervention and a projected 100,000-240,000 deaths with intervention taken to curtail the spread of the virus. (Tom Brenner/Reuters)

U.S. President Donald Trump’s “15 Days to Slow the Spread” coronavirus guidelines — mostly advice to stay home if you’re sick and avoid social gatherings — would have expired by now had he not extended them to April 30.

“We have reason to believe that it’s working,” Vice-President Mike Pence announced at Tuesday’s COVID-19 briefing. He held out the revised one-page bullet point guidelines — “30 Days to Slow the Spread” — and solemnly explained that by extending them, the president was asking the American people to follow the advice for another 30 days.

It’s understandable the White House would try to appear on top of this most formidable challenge of the Trump presidency — especially after repeatedly downplaying the severity of COVID-19 when it first showed up in the U.S. more than two months ago.

The evidence is documented in Trump’s televised statements and his own Twitter feed. He said the outbreak was under control when it wasn’t. He said tests were available for all who needed them when they weren’t.

So last year 37,000 Americans died from the common Flu. It averages between 27,000 and 70,000 per year. Nothing is shut down, life &amp; the economy go on. At this moment there are 546 confirmed cases of CoronaVirus, with 22 deaths. Think about that!

Now deep into the COVID-19 crisis, with more than 211,000 confirmed infections in the U.S. and more than 4,700 deaths, Trump is finding the levers of presidential power aren’t always perfectly aligned with what’s required.

The White House guidelines are much weaker — advisories, really — compared to the state laws now directing the behaviour of more than 265 million Americans.

In Virginia, for instance, Gov. Ralph Northam proclaimed on Monday a statewide stay-at-home order until June 10 — a decree that is much stricter, more confining and six weeks longer than the White House guidelines, and with the actual force of law behind it.

Just as Virginia’s new rules kicked in, Maryland and the District of Columbia announced their own similar orders that effectively shut down all sectors of their economies that are not essential to the health and welfare of the citizenry. More than half the states in the U.S. now have something like that in place, including California, New York and parts of Texas. 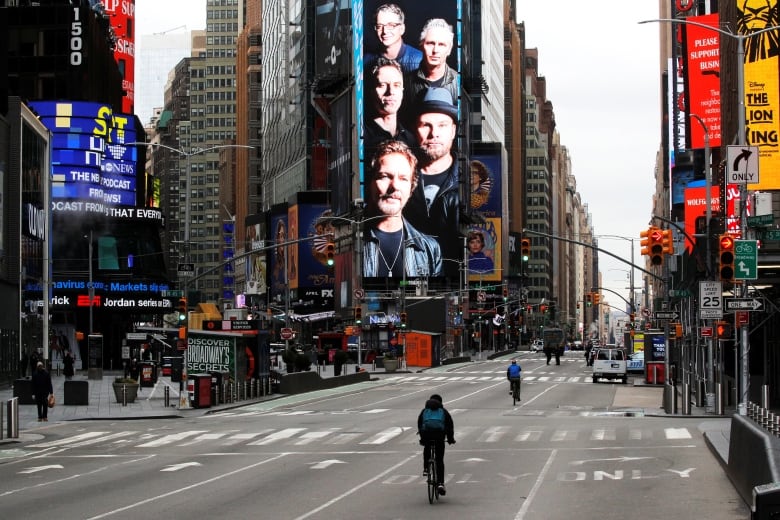 At Trump’s daily White House press briefings, he claims he is a “wartime president” battling an “invisible enemy,” as though he were in command of the fight against the coronavirus. He is not. No single person nor branch of government is.

He might like to have more authority. Trump is keenly aware that a bustling economy with a hot stock market is the cornerstone of his re-election plan. Just last week, he was clearly itching for people to get out of their homes and back to work by Easter lest the economy grind from a slowdown to a stop between now and November.

But it is the individual states that decide whether to impose or lift the shelter-in-place decrees across the country, not Trump — and he can’t change that, say legal scholars citing both the constitution and court precedents.

Constitutionally legitimate federal laws do supersede state and local laws, he says, but there isn’t a federal law that fits these circumstances. Without one, “it does not follow that President Trump can therefore override state and local rules on matters like shelter-in-place.”

Still, Trump does bring some unique powers to the fight against COVID-19. At the end of January, for instance, Trump barred entry by foreign nationals travelling from China — the original epicentre of the outbreak — to the US. Only a president has the authority to do that.

Both the public health and the economic health of the country are, to a large degree, in the hands of all governments — federal, state and local.

State governors estimate both their economic and health-supply needs in the battle against the virus and make demands on the federal government for funds and the co-ordination of scarce supplies of equipment — but again, the president is often not the decisive player.

Sometimes that’s by choice. Trump has told states to look after themselves in the marketplace for medical equipment.

“Respirators, ventilators, all of the equipment — try getting it yourselves,” he reportedly told governors in a conference call last month. 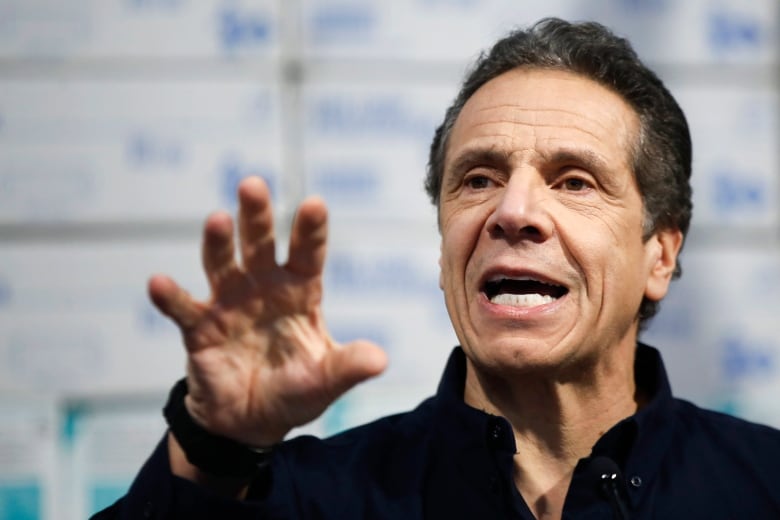 New York Gov. Andrew Cuomo speaks during a news conference last Tuesday against a backdrop of medical supplies at the Jacob Javits Center that will house a temporary hospital in response to the COVID-19 outbreak. Cuomo has received widespread praise for his handling of the health crisis in New York. He has called on the federal government to play a leading in procuring medical supplies and equipment. (John Minchillo/The Associated Press)

And the states complain that this essentially puts them in a bidding war with each other for equipment the federal government could buy and distribute.

Sometimes when the president does want to take charge he’s overruled by lawmakers.

Take, for example, his initial emergency funding plan a few weeks ago.

Trump proposed to Congress a $2.5-billion bill to combat the coronavirus. Congress came back to him with a rewritten bill for more than $8 billion instead.

“I’ll take it,” Trump said, and, really, how could he not? But the message was clear: Congress wouldn’t just rubber-stamp urgent funds based on the president’s say-so. It recalculated the scope of the emergency and decided for itself what was needed.

And from that eventually followed the $2-trillion relief package negotiated by the White House, House Democrats and Senate Republicans. A key part of the bill gives Congress oversight of how the money is spent, something the White House had resisted in the hope it could dole out some of the money as it pleased. Congress didn’t allow that. 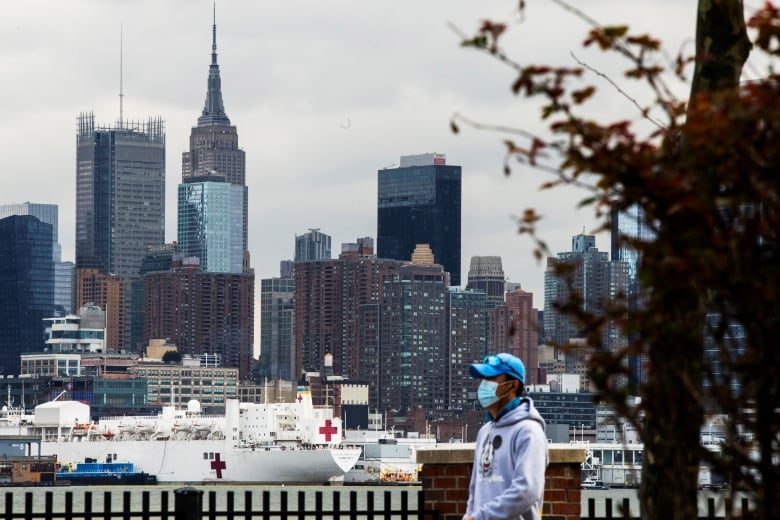 A man wears a face mask while the USNS Comfort and New York’s Empire State Building are seen from Weehawken, N.J. (Eduardo Munoz/Reuters)

Most health services are provided at the state and local level, but as commander-in-chief, Trump has sent a hospital ship to New York and another to Los Angeles. Again, a unique authority put into action by the president.

He has also, after much urging from governors, used the Defence Production Act. The act gives the president power to direct private companies to manufacture whatever is needed. Trump used it last week to order General Motors to speed up production of the ventilators used at hospitals. GM says it was already doing the best it could.

In some ways, the most powerful tool of the presidency is what President Theodore Roosevelt dubbed the bully pulpit — the platform of the office itself. A president’s voice is the loudest and most influential in the country. It can excite people and inspire them to action; it can calm people and bring them together; it can lead a national conversation. It can also fail to do any of that.

At the moment, Trump is cautioning Americans, telling them the worst is yet to come and that limiting the COVID-19 death toll in the U.S. to 100,000 might be a win.

“We’re going to go through a very tough two weeks,” he said at Tuesday’s briefing.

But the record tells an even grimmer story of Trump downplaying the coronavirus threat in the U.S., declaring the outbreak all but over before it had really begun, and dismissing contrary views as a “hoax.”

It is a record that suggests precious time was squandered.

His opponents have already strung together clips of Trump’s bursts of misinformation and posted them online as election-style ads. They will presumably play them from now until November.

And no, Trump doesn’t have the power to stop that either.