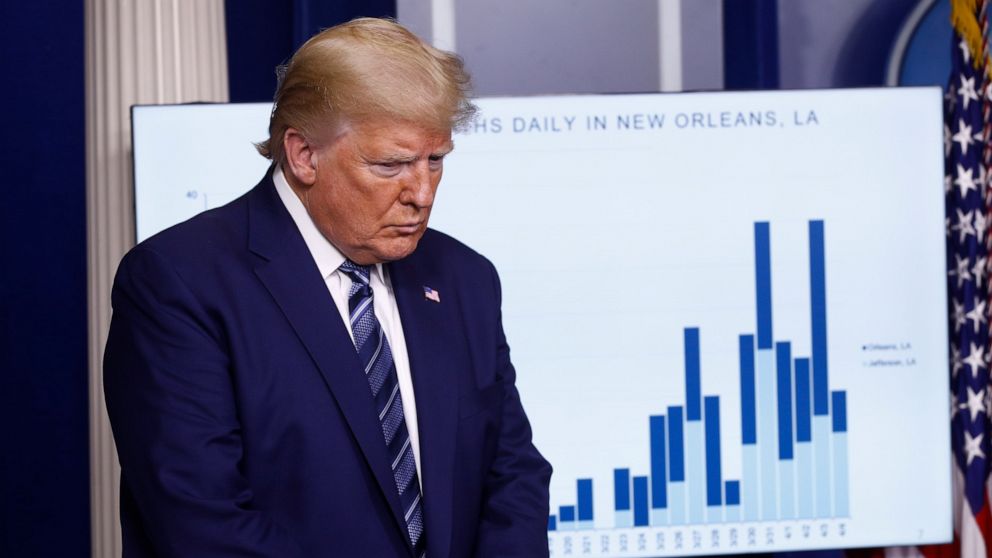 WASHINGTON — President Donald Trump and his administration kept up their out-sized promotion Monday of an malaria drug not yet officially approved for fighting the new coronavirus, even though scientists say more testing is needed before it’s proven safe and effective against COVID-19.

Trump trade adviser Peter Navarro championed hydroxychloroquine in television interviews a day after the president publicly put his faith in the medication to lessen the toll of the coronavirus pandemic.

“What do I know, I’m not a doctor,” Trump said Sunday. “But I have common sense.”

Trump held out promise for the drug as he grasps for ways to sound hopeful in the face of a mounting death toll and with the worst weeks yet to come for the U.S. The virus has killed more than 10,000 in the U.S., and measures meant to contain its spread have taken a painful economic toll and all but frozen life in large swaths of the country.

But medical officials warn that it’s dangerous to be hawking unproven remedies, and even Trump’s own experts have cautioned against it.

The American Medical Association’s president, Dr. Patrice Harris, said she personally would not prescribe the drug for a coronavirus patient, saying the risks of severe side-effects were “great and too significant to downplay” without large studies showing the drug is safe and effective.

“People have their health to lose,” she said. “Your heart could stop.”

In a heated Situation Room meeting of the White House’s coronavirus task force on Saturday, Navarro challenged the top U.S. infectious disease expert, Dr. Anthony Fauci, over his concerns about recommending the drug based only on unscientific anecdotal evidence.

Navarro, who has no formal medical training, erupted at Fauci, raising his voice and claiming the reports of studies he had collected were enough to recommend the drug widely, according to a person familiar with the exchange who spoke on the condition of anonymity to describe the blow-up.

Fauci has repeatedly said current studies provide only anecdotal findings that the drug works. In response, Navarro told CNN on Monday: “I would have two words for you: ‘second opinion.’”

Hydroxychloroquine is officially approved for treating malaria, rheumatoid arthritis and lupus, not COVID-19. Small, preliminary studies have suggested it might help prevent the new coronavirus from entering cells and possibly help patients clear the virus sooner. But those have shown mixed results.

Doctors are already prescribing the malaria drug to patients with COVID-19, a practice known as off-label prescribing. Research studies are now beginning to test if the drugs truly help COVID-19 patients, and the Food and Drug Administration has allowed the medication into the national stockpile as an option for doctors to consider for patients who cannot get into one of the studies.

But the drug has major potential side effects, especially for the heart, and Fauci has said more testing is needed before it’s clear that the drug works against the virus and is safe for use.

Navarro told Fox News Channel’s “Fox & Friends” that doctors in New York hospitals are already distributing the drug to COVID-19 patients and that health care workers are taking it in hopes of being protected from infection. Though he acknowledged the debate with Fauci, Navarro said the focus was on whether the administration should send 29 million doses of the drug in Federal Emergency Management Agency warehouses to hard-hit cities.

“The media is trying to blow it up as a big big debate, but I can tell you that within the room the decision was a sound one, and it was unanimous,” Navarro said.

Asked about his credentials for pushing the drug, Navarro cited his doctorate in social science and said that “in the fog of war, we might take more risks than we otherwise would.” “I’d bet on President Trump’s intuition on this one,” he added.

Administration officials say Trump’s embrace of the drug stems from his desire to provide “hope” for the American people as the death toll mounts and he looks to avoid political consequences from the outbreak.

Some limited studies have been conducted on the use of hydroxychloroquine and antibiotic azithromycin in concert to treat COVID-19, but they have not included critical control groups that scientists use to validate the conclusions.

Researchers in China, for instance, reported that cough, pneumonia and fever seemed to improve sooner among 31 patients given hydroxychloroquine compared with 31 others who did not get the drug, but fewer people in the comparison group had cough or fevers to start with.

Many questions have been raised about another study in France. Some of the 26 people given hydroxychloroquine in that test were not counted in the final results, including three who worsened and were sent to intensive care, one who died a day after later testing negative for the virus and one who stopped treatment because of nausea.

The French study was published in an International Society of Antimicrobial Chemotherapy journal. The society’s president wrote on its website that the report “does not meet the society’s expected standard,” especially for explaining what patients were included and excluded, and how their safety was ensured.

At least one other world leader has also promoted the drugs.

Brazil’s President Jair Bolsonaro has touted the benefits of hydroxychloroquine and azithromycin, saying he’s heard reports of 100% effectiveness when administered in the correct dosages.

On Sunday, he shared a video on social media of Trump’s personal attorney Rudy Giuliani interviewing a doctor who claimed he has successfully treated hundreds of coronavirus patients with the drugs.

Trump’s interest in the drug was piqued in part by coverage on conservative media.

On March 16, Fox News ran a segment on a small French study promoting the effectiveness of hydroxychloroquine in treating the coronavirus. Hours later, attorney Gregory Rigano appeared on a primetime show and said evidence suggested that it could rid the body “completely” of the virus.

Almost instantly, just as the projections of the virus’ impact on the nation grew more dire, the drug’s promise bounced around the echo chamber of the conservative media. Just three days later, Trump himself made the first mention of the drug.

Among the loudest voices in the president’s ear has been Giuliani, who has spoken to Trump about the drug and advocated it in interviews and his new podcast. He has had, as guests, several experts touting the drug and made a few late night phone calls to the White House residence.

“I discussed it with the president after he talked about it,” Giuliani said. “I told him what I had on the drugs. Others around him believe it too.”

The president’s son, Donald Trump Jr., on Friday tweeted a link to an article about the drugs’ possible success and added: “Waiting for others to write this up. The Democrats and the media must be really upset because they tried to destroy @realdonaldtrump for being hopeful that this would be the case.”

Across Europe, there has also been a recent spike in demand for the drugs even as regulators caution against their unlicensed use.

Last week, the European Medicines Agency warned doctors that since there is no proof yet of the drugs’ effectiveness, they should be used only in clinical trials or under emergency use provisions.

The jump in demand for the drugs has meant in some instances that patients who rely on hydroxychloroquine for lupus or other conditions are seeing their supplies diverted for COVID-19.

If hydroxychloroquine is proven to work well against COVID-19, its sales would jump, but pharmaceutical analysts say they don’t know of any company or individual that stands to make a windfall. That’s because there’s so much competition and the vast majority of prescriptions filled are for generics.

For most people, the virus causes mild or moderate symptoms, such as fever and cough that clear up in two to three weeks. For some, especially older adults and people with existing health problems, it can cause more severe illness, including pneumonia, and death.