Residents of the Downtown Eastside have had difficulty maintaining physical distance as COVID-19 threatens to sweep through the vulnerable neighbourhood in Vancouver. (Ben Nelms/CBC)

A couple of months before COVID-19 paralyzed the world, a group of researchers published a study that suggested the mere fact of living in Vancouver’s Downtown Eastside for a long time could effectively cause cognitive decline — which in turn increases your chances of dying.

It should have been eye-catching, but the paper raised barely a headline.

It certainly got nowhere near the attention the same long-term study received in 2015 when it found that Downtown Eastside residents were dying at eight times the national average.

The subjects of the so-called hotel study are those who now find themselves at high risk from the pandemic’s devastation: residents of tightly packed single-room occupancy hotels juggling addiction, poverty, disease and mental illness.

As officials warn about the threat of the novel coronavirus sweeping through the Downtown Eastside, the question remains: Why — after years of research and reports; opioid and HIV/AIDS epidemics; tent cities and serial killer Robert Pickton — nothing before COVID-19 appears to have caused sufficient shock to permanently improve the conditions that now leave area residents so vulnerable?

“The statistics are quite striking,” said Dr. Kristina Gicas, who led the most recent study on cognitive decline and mortality in the Downtown Eastside.

“And I think that it reflects largely failings in our systems.”

Although no deaths have occurred in the Downtown Eastside from the respiratory illness and no positive results have been confirmed in the neighbourhood, B.C. provincial health officer Dr. Bonnie Henry has expressed particular concern for area residents.

The neighbourhood is often described as Vancouver’s historic heart, one of the oldest parts of the city.

The Downtown Eastside is comprised of a few dozen blocks to the east of the downtown core. But in the past three decades, the gritty streets and alleys have earned a notorious reputation, plagued by successive waves of overdose, crime and disease. 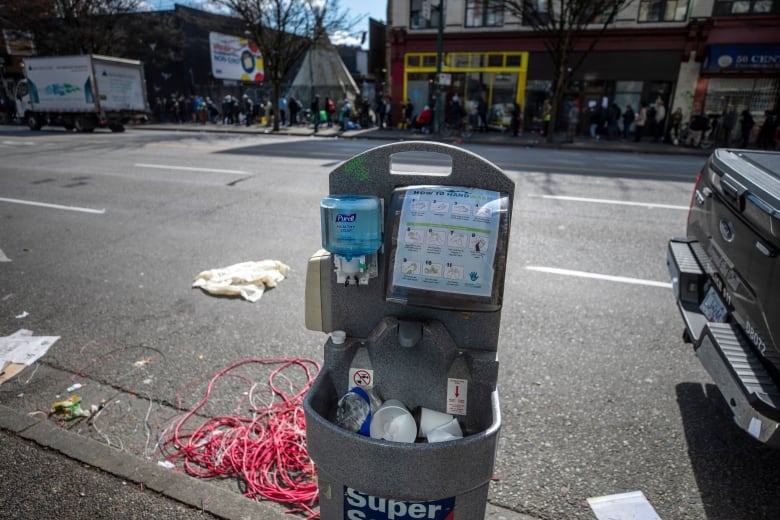 A sanitation station is pictured in the Downtown Eastside in Vancouver. Public health officials fear COVID-19 will sweep through the neighbourhood. (Ben Nelms/CBC)

But a glance at the blocks around the Main and Hastings intersection at the heart of the neighbourhood highlights the depth of the challenge. The streets are still teeming.

In an open letter published this week in the Georgia Straight newspaper, a group of registered nurses and frontline workers said the closure of community centres, drop-ins and libraries had inadvertently made the problem worse.

“We have seen large numbers of people being forced back onto the streets with nowhere to go and no way to ensure physical distancing,” the group wrote, calling for personal protective equipment for workers and increased action to find housing.

“Further measures are urgently needed. Every hour that goes by put the lives of our most vulnerable community members at risk and contributes to the preventable spread of COVID-19.”

‘The Downtown Eastside … is done’

Karen Ward, a longtime resident and advocate for drug users, recently wrote a passionate Facebook post about the virus and its possible impact.

She predicted that the future would not be the same.

“It doesn’t have to be worse. We make our own history, and these are new circumstances. We can make something better, even in this place,” she wrote.

“The Downtown Eastside, as it’s been all this time … is done.” 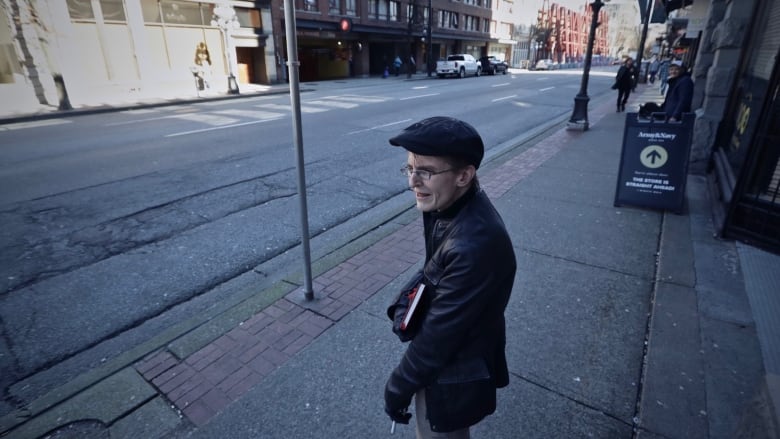 Karen Ward says people are really on edge in the Downtown Eastside, as the panic over COVID-19 around the world sets into her community. She’s worried about the virus taking hold in the neighbourhood, where poverty and drug use have left many people with underlying health conditions and few resources. (Rafferty Baker/CBC)

In a telephone interview, Ward said people have got into the habit, over decades, of saying, “Oh, it’s just the Downtown Eastside” as though it’s an “irreversible, natural, unchangeable way of being” in the face of rates of HIV infection and overdose deaths that at separate points have been some of the highest in Canada and North America.

But she feels the pandemic has placed the neighbourhood at the centre of a crisis to which the general public cannot turn a blind eye.

“It puts into sharp relief the fact that this is about everybody. If we don’t address this directly and practically, the middle class will continue to have to socially isolate and fall apart economically,” she said.

“The entire structure will completely collapse unless we address the Downtown Eastside and get people inside into housing with decent medicine and food and income, because people will continue to go out.”

And yet, advocates, health professionals and politicians have issued dire warnings about the Downtown Eastside in the past.

Gicas, an assistant psychology professor at York University in Toronto, said the research on cognitive decline that she led came out in January. It’s part of an ongoing study conducted through the University of British Columbia and Simon Fraser University.

Researchers have been conducting brain scans and comprehensive psychiatric and neurological tests on about 500 residents of single-room occupancy hotels for the past decade.

WATCH | Advocates worry about spread of COVID-19 in the Downtown Eastside:

Anti-poverty advocates in Vancouver fear a COVID-19 outbreak could devastate the already struggling community on the Downtown Eastside, where many are homeless and drug or alcohol addicted. 2:11

Most of the subjects already suffer from substance abuse and mental impairment. But time spent in the area appears to play its own role.

“Individuals who’s spent more years living in the Downtown Eastside were declining at a faster rate on some aspects of cognitive functioning,” Gicas said.

“I think that speaks to the impact of the environment.”

The city had a Downtown Eastside “plan” before COVID-19 to build “a vision, policies and strategies” focusing on ways to improve the lives of community members.

The work has been ongoing since 2014. But a consultation summary from last August doesn’t exactly paint a rosy picture of progress.

The slow struggle to find solutions is reflected in the battle over a tent city that has taken over Oppenheimer Park in downtown Vancouver for the past year and a half. Despite police concerns about violence, and a fatal assault in January, the city’s Park Board is still working on a “decampment plan.”

Meanwhile, the park’s residents recently posted a change.org petition calling for a COVID-19 plan for the park’s 100 or so residents that is “immediately resourced, culturally safe and actionable.”

WATCH | COVID-19 modelling suggests we’re in it for the long haul:

What mathematical simulations tell us about how the COVID-19 pandemic will play in the real world. 5:04

Dr. Bill MacEwan, the clinical lead on the hotel study, said he’s noticed a breakdown in “the basics of civil order” in the area in the past two years.

More guns. More violence. More people in the streets. And now a pandemic.

“We had HIV, then Hepatitis C was a big problem. The opioid crisis has never really gone away. Now, there’s more meth out there than ever. And now, it’s a matter of what’s next?”

The province and the provincial health officer have already used the sweeping powers of emergency declarations to radically alter the lives of British Columbians, forcing them to stay indoors and to stay apart.

To address the Downtown Eastside, the province has taken the extraordinary step of ensuring the provision of medication to addicts, including a safe supply of prescription alternatives to illegal drugs.

The legislation that allows for those kinds of orders also permits even bigger interventions, such as the requisitioning of buildings and resources for any use needed to fight the pandemic. 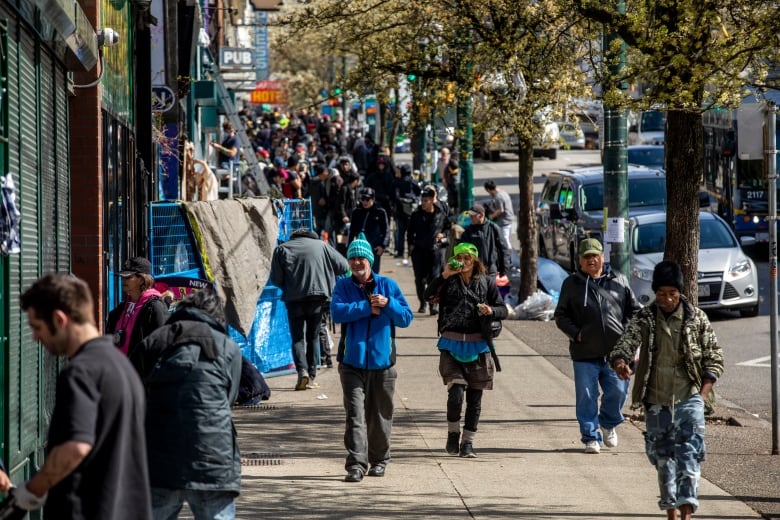 The streets of the Downtown Eastside are teeming, despite orders from B.C.’s provincial health officer for people to physically distance themselves. (Ben Nelms/CBC)

Both in the short term and the long term, MacEwan says, COVID-19 may finally force a change in thinking around the Downtown Eastside.

“I do wonder if the whole social change that we’ve had to bring about with COVID will allow us to finally say ‘OK, some things we have to say no to,'” he said.

In the same way citizens refusing to physically distance on Vancouver’s beaches or seawall needed enforceable orders to comply, MacEwan said, residents like those he and his colleagues have been studying for the past 10 years may need more than just encouragement to lift them out of an environment that’s literally killing them.

He applauds safe drug injection sites and efforts to lift people out of poverty.

“But are they working?” MacEwan asks.

“Part of it has to be a bit of a push or a nudge (toward improvement). Because I don’t think we’re seeing any evidence that if it needs to be done, it’ll be done voluntarily. I think we’ve just seen for two decades that it doesn’t occur.”